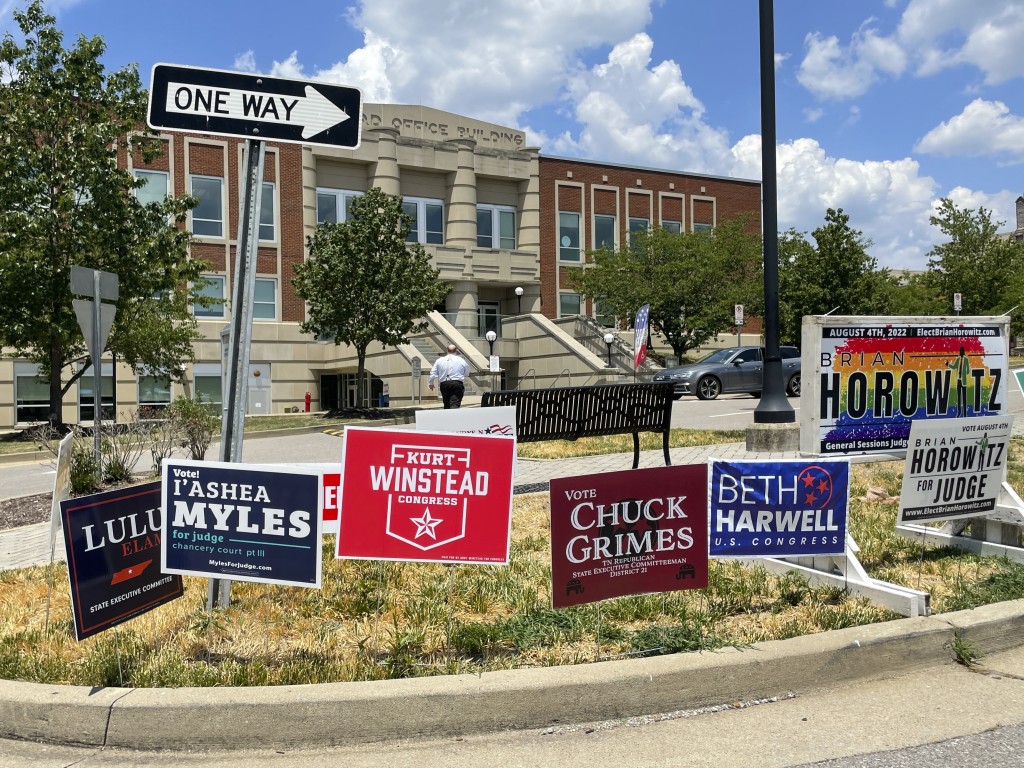 Campaign signs are posted outside a polling location on the first day of early voting July 15, 2022, in Nashville, Tenn. GOP lawmakers redistricted the left-leaning city early this year, splitting its one seat into three to help Republicans gain a seat. (AP Photo/Jonathan Mattise)

A handful of ballot initiatives and district attorney races were also on the ballot in some counties, as well as Supreme Court retention for all of the justices.

Here’s a look at some of the top contests:

Tennessee has not elected a Democrat to statewide office since 2006.

Earlier this year, Tennessee’s GOP-dominated General Assembly split left-leaning Nashville into three congressional districts with the goal of flipping a seat from Democrat to Republican. Longtime incumbent Democratic U.S. House Rep. Jim Cooper announced he wouldn’t seek reelection because he felt there was no path for him to win.

On Thursday, Maury County Mayor Andy Ogles, from Columbia, emerged as the GOP nominee from among nine candidates in the 5th District. Among those he defeated were former state House Speaker Beth Harwell, from Nashville, and retired Tennessee National Guard Brig. Gen. Kurt Winstead, of Franklin.

State Sen. Heidi Campbell from Nashville was the only candidate running in the Democratic primary.

In the Republican-supermajority Legislature, all of Tennessee’s 99 state House seats are up for election this year. There are currently 15 open seats, the majority of them held by Republicans. Twenty-one seats featured contested Republican primaries and nine included contested Democratic primaries.

Republican Rep. Bob Ramsey of Maryville didn’t survive a challenge from the right against Bryan Richey, an insurance agent from Maryville.

Republican Rep. Terri Lynn Weaver, a Lancaster gospel singer and songwriter known for her serenades at the statehouse, lost to Michael Hale, a Smithville funeral home owner and farmer.

The openings include the seat of disgraced former House Speaker Glen Casada, who was ousted from the top position in 2019 after a series of scandals. Former GOP Rep. Robin Smith resigned earlier this year after facing federal charges that allege she ran a political consulting kickback scheme with Casada and his former chief of staff, neither of whom have been charged to date.

Tennessee’s most populous county, Shelby, featured a couple of key races and a notable referendum.

County Mayor Lee Harris was challenged by Memphis City Council member Worth Morgan. Harris, a Black Democrat, was seeking his second four-year term. Morgan, a white Republican, has served on the council since 2016.

The pair have clashed in debates, and the issue of abortion prosecutions under the state’s pending “trigger law” has become an issue. The law essentially would ban all abortions statewide and make it a felony to perform the procedure.

Mulroy said he would make prosecution of those who perform abortions an “extremely low” priority. Weirich has not said outright whether she will or won’t prosecute doctors who perform abortions, instead saying that doing so would violate Tennessee code forbidding prosecutors from issuing “a broad and hypothetical statement without an actual charge or case.”

You can find election results from around West Tennessee here.