JACKSON, Tenn. –If you have unwanted items in your home, such as mattresses or old furniture, an event by the City of Jackson’s Health and Sanitation Department may be exactly what you need. 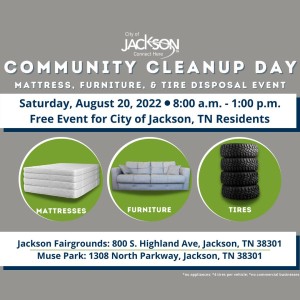 The event will be held at two locations including the Jackson Fairgrounds located at 800 S. Highland Avenue and Muse Park located at 1308 North Parkway in Jackson.

City of Jackson residents can bring their unwanted furniture, mattresses, box springs, or old tires to the event to be safely disposed of.

No appliances will be accepted and only four tires accepted per household. The event attempts to discourage illegal dumping in the city.

This is a free event and open to Jackson residents, no commercial businesses.

For more information, visit the City of Jackson’s website at www.jacksontn.gov.