WASHINGTON (AP) — Millions of Americans are waiting to learn the fate of their federal student debt as President Joe Biden prepares to deliver on his campaign promise to provide up to $10,000 in debt cancellation. Details of the plan have been kept closely guarded. But borrowers who earn less than $125,000 a year would be eligible for the loan forgiveness. That’s according to three people familiar with the decision, expected to be announced Wednesday. Biden is also set to extend a pause on federal student loan payments until January. Legal challenges are almost certain to come. 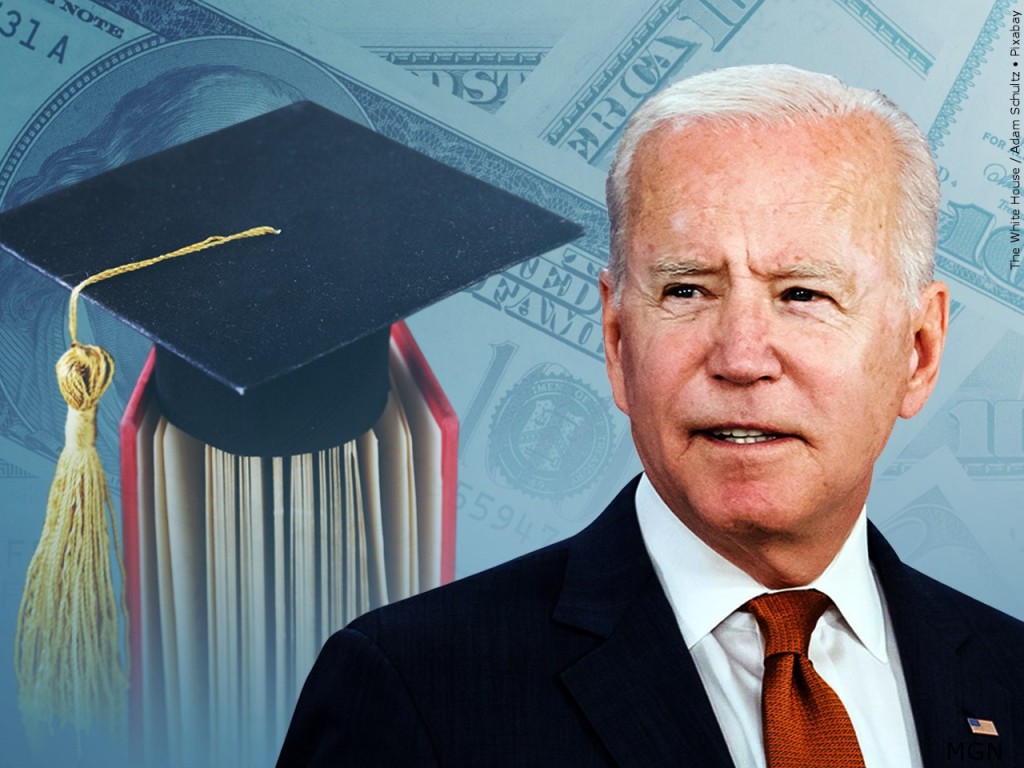 WASHINGTON (AP) — Millions of Americans were waiting to learn the fate of their federal student debt on Wednesday as President Joe Biden prepared to deliver on his campaign promise to provide up to $10,000 in debt cancellation.

Details of the plan have been kept closely guarded, but borrowers who earn less than $125,000 a year would be eligible for the loan forgiveness, according to three people familiar with the decision. Biden is also set to extend a pause on federal student loan payments until January.

If it survives legal challenges that are almost certain to come, Biden’s plan could offer a windfall to a swath of the nation in the run-up to this fall’s midterm elections. More than 43 million people have federal student debt, with an average balance of $37,667, according to federal data. Nearly a third of borrowers owe less than $10,000, and about half owe less than $20,000.

Proponents say cancellation will narrow the racial wealth gap — Black students are more likely to borrow federal student loans and at higher amounts than others. Four years after earning bachelor’s degrees, Black borrowers owe an average of nearly $25,000 more than their white peers, according to a Brookings Institution study.

Still, the action is unlikely to thrill any of the factions that have been jostling for influence as Biden weighs how much to cancel and for whom.

Biden has faced pressure from liberals to provide broader relief to hard-hit borrowers, and from moderates and Republicans questioning the fairness of any widespread forgiveness. The delay in Biden’s decision has only heightened the anticipation for what his own aides acknowledge represents a political no-win situation. The people spoke on the condition of anonymity to discuss Biden’s intended announcement ahead of time.

The continuation of the coronavirus pandemic-era payment freeze comes just days before millions of Americans were set to find out when their next student loan bills will be due. This is the closest the administration has come to hitting the end of the payment freeze extension, with the current pause set to end Aug. 31.

Wednesday’s announcement was set for the White House after Biden returns from vacation in Rehoboth Beach, Delaware. The administration had briefly considered higher education schools in the president’s home state for a larger reveal but scaled back its plans.

During the 2020 presidential campaign, Biden was initially skeptical of student loan debt cancellation as he faced off against more progressive candidates for the Democratic nomination. Sens. Elizabeth Warren, D-Mass., and Bernie Sanders, I-Vt., had proposed cancellations of $50,000 or more.

As he tried to shore up support among younger voters and prepare for a general election battle against President Donald Trump, Biden unveiled his initial proposal for debt cancellation of $10,000 per borrower, with no mention of an income cap.

Biden narrowed his campaign promise in recent months by embracing the income limit as soaring inflation took a political toll and as he aimed to head off political attacks that the cancellation would benefit those with higher take-home pay. But Democrats, from members of congressional leadership to those facing tough reelection bids this November, have pushed the administration to go as broad as possible on debt relief, seeing it in part as a galvanizing issue, particularly for Black and young voters this fall.

The frenzied last-minute lobbying continued Tuesday even as Biden remained on his summer vacation. Senate Majority Leader Chuck Schumer, D-N.Y., one of the loudest advocates in recent years for canceling student loan debt, spoke privately on the phone with Biden, imploring the president to forgive as much debt as the administration can, according to a Democrat with knowledge of the call.

In his pitch, Schumer argued to Biden that doing so was the right thing morally and economically, said the Democrat, who asked for anonymity to describe a private conversation.

Inside the administration, officials have discussed forgiving more than $10,000 of student debt for certain categories of borrowers, such as Pell Grant recipients, according to three people with knowledge of the deliberations. That remained one of the final variables being considered by Biden heading into Wednesday’s announcement.

Democrats are betting that Biden, who has seen his public approval rating tumble over the last year, can help motivate younger voters to the polls in November with the announcement.

Although Biden’s plan is narrower than what he initially proposed during the campaign, “he’ll get a lot of credit for following through on something that he was committed to,” said Celinda Lake, a Democratic pollster who worked with Biden during the 2020 election.

She described student debt as a “gateway issue” for younger voters, meaning it affects their views and decisions on housing affordability and career choices. A survey of 18- to 29-year-olds conducted by the Harvard Institute of Politics in March found that 59% of those polled favored debt cancellation of some sort — whether for all borrowers or those most in need — although student loans did not rank high among issues that most concerned people in that age group.

Some advocates were already bracing for disappointment.

“If the rumors are true, we’ve got a problem,” Derrick Johnson, the president of the NAACP, which has aggressively lobbied Biden to take bolder action, said Tuesday.

“President Biden’s decision on student debt cannot become the latest example of a policy that has left Black people — especially Black women — behind,” he said. “This is not how you treat Black voters who turned out in record numbers and provided 90% of their vote to once again save democracy in 2020.”

John Della Volpe, who worked as a consultant on Biden’s campaign and is the director of polling at the Harvard Kennedy School Institute of Politics, said the particulars of Biden’s announcement were less important than the decision itself.

“It’s about trust in politics, in government, in our system. It’s also about trust in the individual, which in this case is President Biden,” Della Volpe said.

Republicans, meanwhile, see a political upside if Biden pursues a large-scale cancellation of student debt ahead of the November midterms, anticipating backlash for Democrats — particularly in states where there are large numbers of working-class voters without college degrees. Critics of broad student debt forgiveness also believe it will open the White House to lawsuits, on the grounds that Congress has never given the president the explicit authority to cancel debt on his own.

The Republican National Committee on Tuesday blasted Biden’s expected announcement as a “handout to the rich,” claiming it would unfairly burden lower-income taxpayers and those who have already paid off their student loans with covering the costs of higher education for the wealthy.

Biden’s elongated deliberations have sent federal loan servicers, who have been instructed to hold back billing statements while Biden weighed a decision, grumbling.

It increases the risk that some borrowers will inadvertently be told they need to make payments, he said.

“At this late stage I think that’s the risk we’re running,” he said. “You can’t just turn on a dime with 35 million borrowers who all have different loan types and statuses.”