LAS VEGAS (AP) — The identification of bones found in May on the receding shoreline of Lake Mead has resurfaced family memories of a 42-year-old Las Vegas father believed to have drowned 20 years ago. 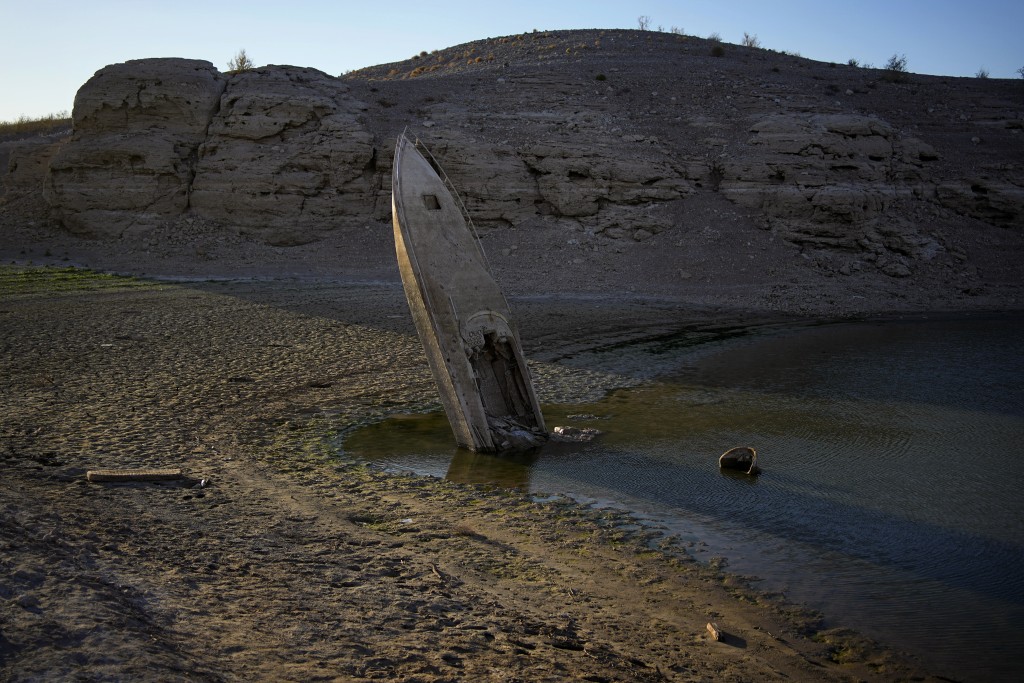 FILE – A formerly sunken boat sits upright into the air with its stern stuck in the mud along the shoreline of Lake Mead at the Lake Mead National Recreation Area, Friday, June 10, 2022, near Boulder City, Nev. The identification of bones found in May on the receding shoreline of Lake Mead has resurfaced family memories of a 42-year-old Las Vegas father believed to have drowned 20 years ago. (AP Photo/John Locher, File)

Thomas Erndt’s son, also named Tom Erndt, told KSNV-TV in Las Vegas that his father began to struggle after jumping into the water during a nighttime family boat outing late Aug. 2, 2002. The younger Tom Erndt said he was 10 at the time.

“It is going to take a lot of time for me to move forward and remember this,” he told KVVU-TV, recalling that he spent a lot of time with his father, an aircraft mechanic, at his job.

Family members did not immediately respond Friday to email messages from The Associated Press.

The Clark County coroner’s office said Wednesday that Thomas Erndt’s bones were the ones found May 7 near a former marina at the shrinking Colorado River reservoir behind Hoover Dam.

A statement from Coroner Melanie Rouse said investigators used DNA and reports of Erndt’s disappearance for the identification. An official cause and manner of death were not determined.

Coroner’s investigators still are working to identify a man who was killed by a gunshot after his body was found May 1 in a rusted barrel. His clothing suggested his death dated from the 1970s or 1980s, and authorities said it was being investigated as a homicide.

That discovery prompted speculation about watery graves and renewed interest in the lore of organized crime in early years of casino development on the Las Vegas Strip — about a 30-minute drive from the lake.

Several more sets of partial human skeletal remains have been found since then — including on July 25, Aug. 6 and Aug. 16 — generally near a swimming area at the lake. They were not in barrels.

The water level at Lake Mead has dropped more than 170 feet (52 meters) since it was full in 1983, putting the reservoir today at less than 30% of capacity.

Tom Erndt, of South San Francisco, California, told KSNV-TV he wants his father to be remembered as a person, not bones found at the lake.

His aunt, Julie Erndt, now living in Kentucky, told the Las Vegas Review-Journal she was thankful that her brother’s remains were finally identified.