NEW YORK (AP) — Sterling Lord, the uniquely enduring literary agent who worked for years to find a publisher for Jack Kerouac’s “On the Road” and over the following decades arranged deals for everyone from true crime writer Joe McGinniss to the creators of the Berenstain Bears, has died. He had just turned 102.

Lord died Saturday in a nursing home in Ocala, Florida, according to his daughter, Rebecca Lord.

“He had a good death and died peacefully of old age,” she told The Associated Press. 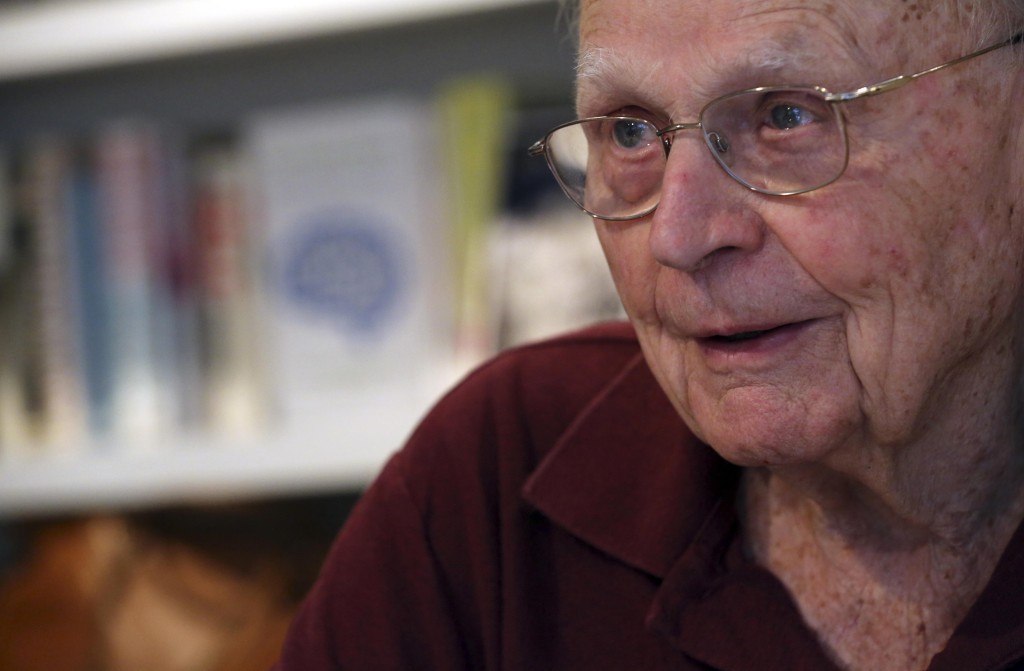 FILE – In this Jan. 8 2013 file photo, literary agent Sterling Lord speaks during an interview in his New York office. The uniquely enduring literary agent who worked for years to find a publisher for Jack Kerouac’s “On the Road” and over the following decades arranged deals for everyone from true crime writer Joe McGinniss to the creators of the Berenstain Bears, has died. He had just turned 102. Lord died Saturday, Sept 3, 2022 in a Skilled Nursing home in Ocala, Florida, according to his daughter, Rebecca Lord. (AP Photo/Mary Altaffer, file)

Sterling Lord, who started his own agency in 1952 and later merged with rival Literistic to form Sterling Lord Literistic Inc., was a failed magazine publisher who became, almost surely, the longest-serving agent in the book business. He stayed with the company he founded until he was nearly 100 — and then decided to launch a new one.
He was well-spoken and athletic, a most able negotiator who dressed in tweed and avoided most vices. But he was alert to new trends and an early ambassador for a revolutionary cultural movement: the Beats. With rare persistence, he endured the initial unwillingness of publishers to take on Kerouac’s unorthodox narrative and was later the longtime agent for poet and playwright Amiri Baraka, novelist Ken Kesey and poet and City Lights bookstore owner Lawrence Ferlinghetti.
His full roster of clients produced works about sports, politics, murder and the travails of illustrated animals.

Thanks to his friendship with Theodore Geisel, better known as Dr. Seuss, Lord helped launch Stan and Jan Berenstain’s multimillion-selling books about an anthropomorphic bear family. He negotiated terms between McGinniss and accused killer Jeffrey MacDonald, later convicted, for the true crime classic “Fatal Vision.” He found a publisher for Nicholas Pileggi’s mob story “Wiseguy” and helped arrange the deal for its celebrated film adaptation, “Goodfellas.”

In the early 1960s, Viking had asked Lord to get a blurb from Kerouac for “One Flew Over the Cuckoo’s Nest,” Kesey’s first and most famous novel. Kerouac declined, but Lord was so impressed by the book that he ended up representing Kesey for his next work, “Sometimes a Great Notion.”

He represented former U.S. Defense Secretary Robert McNamara and Judge John Sirica of Watergate fame and worked often with Jackie Kennedy during her time as an editor with Doubleday and Viking. Some of the great sports books of the 20th century, from “North Dallas Forty” to “Secretariat,” were written by his clients.

“A number of things about this business have really caught me and made it a compelling interest,” Lord told the AP in 2013. “First, I’m interested in good writing. Second, I am interested in new and good ideas. And third, I’ve been able to meet some extraordinarily interesting people.”

Lord would also speak proudly of a project he declined: Lyndon Johnson’s memoir. Representatives for the former president informed Lord in the late 1960s that Johnson wanted $1 million for the book and that Lord should accept less than his usual commission for the honor of working with him. Lord turned them down, much to their surprise and anger.

Johnson’s “The Vantage Point,” ultimately published in 1971, was dismissed by critics as bland and uninformative. Lord instead found a deal for “Quotations from Chairman LBJ,” a bestselling parody.

Lord was married four times, and had one child, Rebecca.

Books and tennis were lifelong passions for Lord, born in Burlington, Iowa, in 1920. It began when his mother would read to him after dinner; he went on to edit his high school newspaper and work as a sports stringer around the same time for the Des Moines Register. He also became a tennis star at Grinnell College, and later a good enough player to compete against Don Budge, among others.

His upbringing, he would later write, was the kind of “pleasant, orderly” world “the Beats were trampling on in the fifties and sixties.”
After serving in the Army Air Force during World War II, Lord co-owned the Germany-based magazine Weekend, which soon folded. Back in the U.S., he served as an editor at True and Cosmopolitan, from which he was fired, before founding the Sterling Lord Literary Agency. Lord had met many agents during his magazine years and believed they failed to understand that the American public was becoming more urban and sophisticated. He also prided himself on his sympathy for writers who lived far more wildly than he did.

His first marriage, he would acknowledge, helped inspire him to go into business for himself.

“Frankly, I didn’t want to deal with the situation at home,” he told the Des Moines Register in 2015.

Lord had quick success by selling film rights to two popular sports books, Rocky Graziano’s “Somebody Up There Likes Me” and Jimmy Piersall’s “Fear Strikes Out.” But Lord’s “On the Road” quest would prove bumpier.

In his 2013 memoir “Lord of Publishing,” Lord remembered first meeting Kerouac in 1952. Kerouac already had completed a conventional novel, “The Town and the City,” but had no agent and surely needed one for his next book: “On the Road” was typed, as Lord was among the first to know, “on a 120-foot scroll of architectural tracing paper.”

Lord believed that Kerouac had “a fresh, distinctive voice that should be heard.” But the industry was not in the mood. Even younger editors who may have related to Kerouac’s jazzy celebration of youth and personal freedom turned him down. One editor wrote to Lord that “Kerouac does have enormous talent of a very special kind. But this is not a well-made novel, nor a saleable one nor even, I think, a good one.”

By 1955, Kerouac was ready to give up — but Lord was not. The agent eventually sold excerpts to The Paris Review and the periodical New World Writing. An editor from Viking Press contacted Lord, offering an advance of $900. Lord held out for $1,000. In 1957, the book was released, The New York Times raved and “On the Road” soon entered the American canon.

But Kerouac was a shy and fragile man, Lord wrote. Fame magnified a drinking problem that killed him by 1969. Lord even recruited a doctor who unsuccessfully attempted to get Kerouac to clean up, but the businessman eventually backed away since he was his “literary agent, not his life agent.”
Lord attended Kerouac’s funeral, sharing a limousine ride with his client Jimmy Breslin and standing by the grave alongside Allen Ginsberg, “the sunlight filtering through the trees, the leaves brown after losing their fall colors.”

Lord oversaw Kerouac’s numerous posthumous releases even as he battled the author’s family for control of the estate. After years of failed attempts, a filmed version of “On the Road” was released in 2012. But Lord had little involvement in the project, directed by Walter Salles and starring Sam Riley and Kristen Stewart. He did didn’t bother to attend a special screening it, citing mixed early reviews, and didn’t show up for a private party for the film.