WARRENTON, N.C. (AP) — President Joe Biden’s top environment official visited what is widely considered the birthplace of the environmental justice movement Saturday to unveil a national office that will distribute $3 billion in block grants to underserved communities burdened by pollution.

Forty years after a predominantly Black community in Warren County, North Carolina, rallied against hosting a hazardous waste landfill, Michael Regan, the first Black man to serve as administrator of the Environmental Protection Agency, announced he is dedicating a new senior level of leadership to the environmental justice movement they ignited. 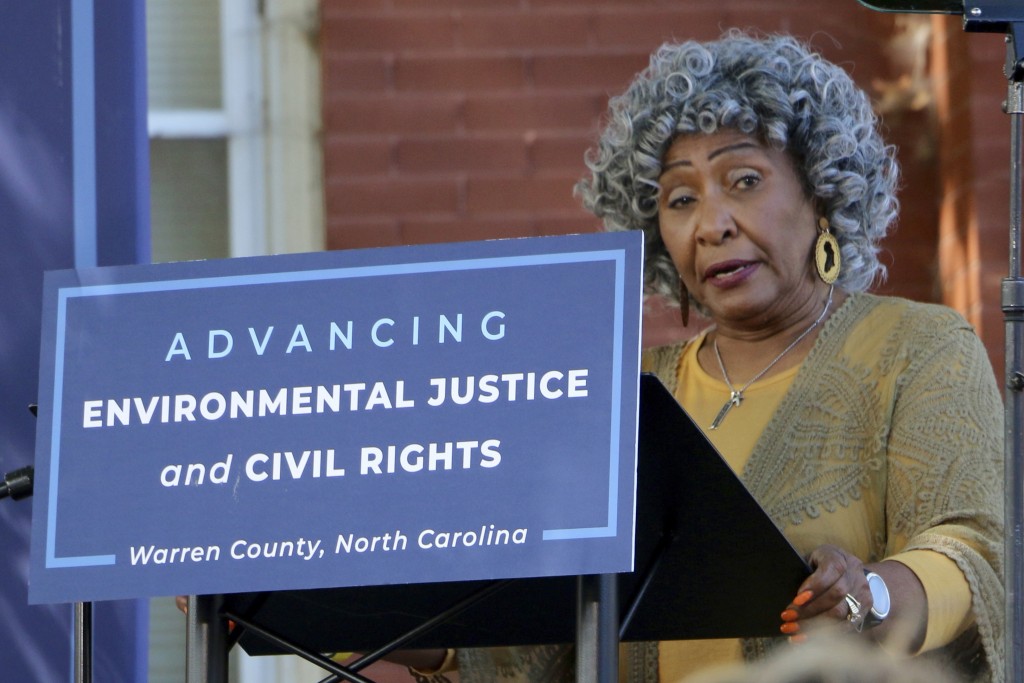 Dollie Burwell, a leader of the 1982 Warren County protests that birthed the environmental justice movement, speaks about the evolution of the movement at a ceremony in Warrenton, N.C., on Saturday, Sept. 24, 2022. (AP Photo/Hannah Schoenbaum)

The Office of Environmental Justice and External Civil Rights — comprised of more than 200 current staff members in 10 U.S. regions — will merge three existing EPA programs to oversee a portion of Democrats’ $60 billion investment in environmental justice initiatives created by the Inflation Reduction Act. The president will nominate an assistant administrator to lead the new office, pending Senate confirmation.

“In the past, many of our communities have had to compete for very small grants because EPA’s pot of money was extremely small,” Regan said in an interview. “We’re going from tens of thousands of dollars to developing and designing a program that will distribute billions. But we’re also going to be sure that this money goes to those who need it the most and those who’ve never had a seat at the table.”

Biden has championed environmental justice as a centerpiece of his climate agenda since his first week in office, when he signed an executive order pledging 40% of the overall benefits from certain federal clean energy investments to disadvantaged communities overwhelmed by pollution.

Now, Regan said, this new office intertwines environmental justice with the central fabric of the EPA, equating it to other top offices like air and water, and cementing its principles in a way that will outlive the administration.

North Carolina in 1978 designated Warren County, a small, predominantly Black farming community along the Virginia border, as a disposal site for truckloads of soil laced with highly carcinogenic chemical compounds that later contaminated the water supply.

As the first trucks rolled into town in 1982, hundreds of residents flooded the streets, blocking their path to the landfill. Though they were unable to shut down the operation after six weeks of nonviolent protests and more than 500 arrests, their efforts have been lauded by civil rights leaders as the impetus for a global uprising against environmental racism in minority communities.
Wayne Moseley, 73, was one of the initial protesters arrested on the first day of the demonstration. The Raleigh resident commuted to Warren County to march on behalf of his mother, whose health prevented her from participating. He called Saturday’s ceremony “a homecoming” for himself and many other protesters he hadn’t seen for 40 years.

“We became a family, no Black or white, no rich or poor — we were all one,” Moseley said. “The state was hell-bent on putting that dump site here. I knew we couldn’t stop it, but we could elevate the consciousness of not only the state but the nation.”

Dollie Burwell, a protest leader known in the community as “the mother of the movement,” honored the bravery of her late daughter Kimberly Burwell, who was only 8 years old when she joined her mother on the frontlines.

“She stood up and led so many children in the protests,” Burwell said of her daughter during the ceremony. “She was not afraid of being arrested. But she was afraid of her family and friends getting cancer” from carcinogenic compounds in the soil.

Government officials have routinely targeted low-income communities of color like Warren County to host hazardous waste facilities since the early 1900s. And the neglect of critical infrastructure in predominantly Black communities, ranging from Flint, Michigan, to Jackson, Mississippi, has led to problems still seen today.

An April study by the University of California, Berkeley and Columbia University found that the majority of Black and Latino neighborhoods that received low scores in a discriminatory federal housing program known as redlining were home to twice as many oil wells as majority white communities. According to the Clean Air Task Force, Black Americans are 75% more likely than white Americans to live near a factory or plant and nearly four times as likely to die from exposure to pollutants.

The Rev. Dr. William Barber II, a prominent social activist and leader of the Poor People’s campaign, said he sees Regan’s announcement as “a great starting point” and will continue to demand more of the Biden administration.

Regan, who is from Goldsboro, North Carolina, said he grew up listening to local civil rights leaders like Barber and Burwell — the early inspirations for his work at the EPA.

“I’m taking all of these experiences (from my childhood) and matching that with the vision of the president,” Regan said. “We’re using this opportunity to not only honor those who came before us, but we’re building on the work that they started. We’re standing on their shoulders and trying to reach higher heights.”

Just 45 days out from the midterm election, Regan is among several Cabinet members visiting North Carolina this month to promote the president’s achievements, including the visits of Vice President Kamala Harris on Sept. 1 and Treasury Secretary Janet Yellen next Tuesday in Durham. Democrats have set their sights on the Southern swing state as a potential pickup in the narrowly divided U.S. Senate and other key offices.