COLLIERVILLE, Tenn. (AP) — Part of healing and moving from place of grief to hope involves looking back.

Friday night, about 150 community members did just that on the front steps of Collierville Town Hall. They gathered to look back on Sept. 23, 2021. It’s been one year since a gunman opened fire in the Kroger on New Byhalia, injuring 15 people during the mayhem. Olivia King, a shopper, was the only one to succumb to her injuries.

Wes King, her son, was among those present, Friday. Although he now lives in Ohio, he returned to his hometown to remember the life of his mother and the tragedy which took her life.
“I’m reconciling the fact she’s gone and the undeniable fact she shouldn’t be,” he said, noting she didn’t die of other sickness, but due to a senseless act. “This as an example of our corrupted free will at times.” 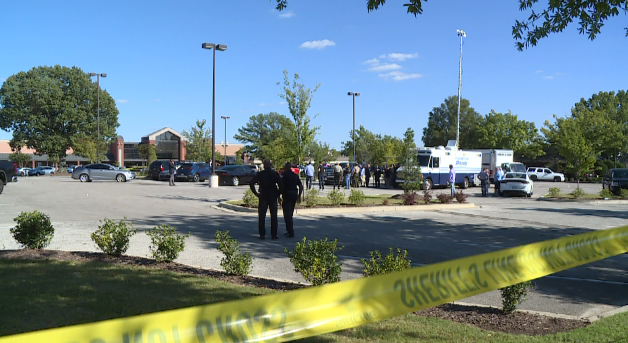 He noted his mother was devout in her faith. She went to mass that morning to be with the Lord. King believes that afternoon, she saw the Lord.

“We have to do something,” he said of tragedies the nation continues to see. “It starts with us. My mother loved her family. She loved other people. She gave generously. … We have to start with love, and that love comes from God. You are helping lead that with the love you showed in the wake of that event.”

He and Alderwoman Maureen Fraser released doves in remembrance of his mother. Fraser, a friend of Olivia King, fought tears as she watched the doves soar into the distance.

The Kemmons Wilson Family Center for Good Grief at Baptist Memorial Hospital-Collierville was an essential part of helping the community deal with the trauma. Angela Hamblen-Kelly, the center’s executive director noted everyone holds some amount of grief, but those gathered shared in the grief of the Kroger incident.

“We grieve because we love,” she said, noting remembering the tragedy is an essential part of healing and moving forward.

“The trial of one season has become the testimony of another,” Matt Shackelford, Central Church’s lead pastor prayed. “We do long for that season where peace will reign, when love will reign.”
Earlier in the day, BankTennessee hosted a lunch for the fire department. Wright Cox, the bank’s president and CEO. Firefighters and aldermen feasted on catfish, hushpuppies and coleslaw. Collierville Commissary donated banana pudding.

“It’s really hard to express to these men and women how much they mean to our community,” Cox said. “Of course this day is a tragic day, but it’s also a day that shows how Collierville continues to stand.”

Cox said they wanted to do something simple yet visible to show appreciation for their actions on Sept. 23 and every day. Cox’s brothers were firefighters, and one went into Kroger alongside the firefighters on the day that shook the Collierville community. However, it created a deeper bond among an already tight-knit community that prides itself on its small-town feel.

“We will never forget the courage of the law enforcement officers, firefighters and first responders who sprang into actions,” Kustoff said, noting their efforts saved lives. “I am proud to say that today and always we are Collierville Strong.”