FORT MYERS, Fla. (AP) — Rescuers searched for survivors among the ruins of Florida’s flooded homes from Hurricane Ian while authorities in South Carolina began assessing damage from its strike there as the remnants of one of the strongest and costliest hurricanes to ever hit the U.S. continued to push north.

The powerful storm terrorized millions of people for most of the week, battering western Cuba before raking across Florida from the warm waters of the Gulf of Mexico to the Atlantic Ocean, where it mustered enough strength for a final assault on South Carolina. Now weakened to a post-tropical cyclone, Ian was expected to move across North Carolina then into Virginia and New York. 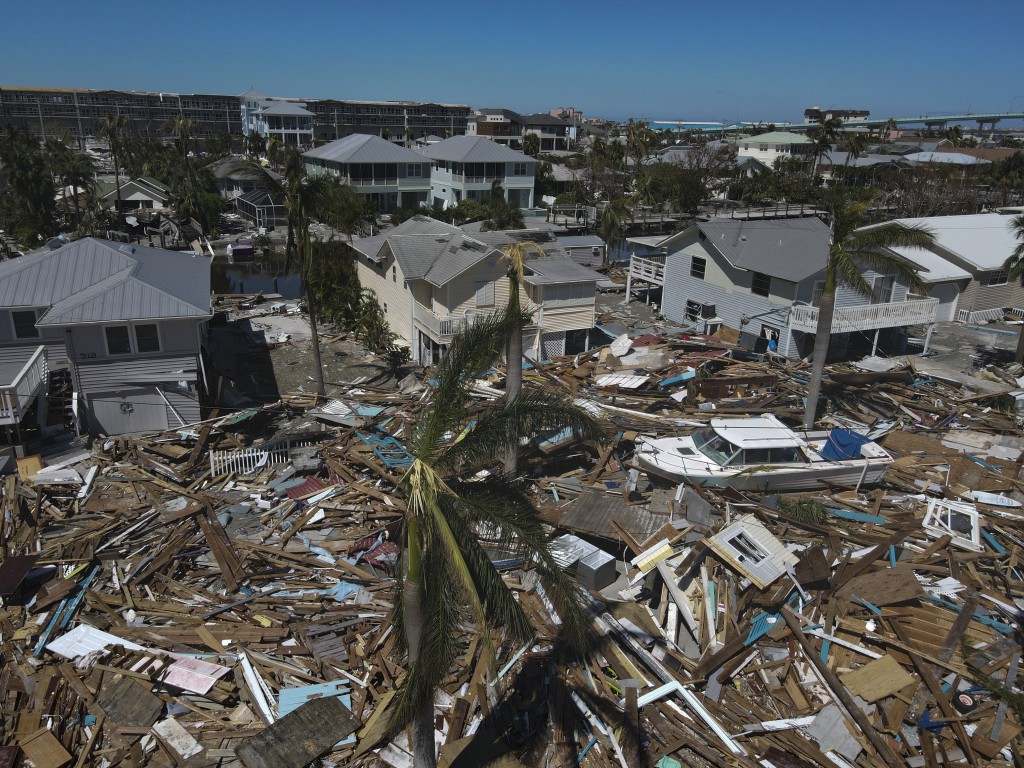 In this photo taken with a drone, debris from destroyed buildings swept from the beachfront lies amid damaged homes, two days after the passage of Hurricane Ian, in Fort Myers Beach, Fla., Friday, Sept. 30, 2022. (AP Photo/Rebecca Blackwell)

At least 31 people were confirmed dead, including 27 people in Florida mostly from drowning but others from the storm’s tragic aftereffects. An elderly couple died after their oxygen machines shut off when they lost power, authorities said.

Chris Schnapp was at the Port Sanibel Marina in Fort Myers on Saturday, waiting to see whether her 83-year-old mother-in-law had been evacuated from Sanibel Island. A pontoon boat had just arrived with a load of passengers from the island — with suitcases and animals in tow — but Schnapp’s mother-in-law was not among them.

“She stayed on the island. My brother-in-law and sister-in-law own two businesses over there. They evacuated. She did not want to go, thinking it wasn’t going to be bad,” Schnapp said. But then she got word Friday night that her mother-in-law would be arriving at the marina: “Now we don’t know if she’s still on the island or gotten on a bus,” and was taken to a shelter, Schnapp said.
South Carolina’s Pawleys Island, a beach community about 73 miles (117 kilometers) up the coast from Charleston, was among the places hardest hit by Ian, and power remained knocked out to at least half of the island Saturday.

Eddie Wilder, who has been coming to Pawleys Island for more than six decades, said Friday’s storm was “insane to watch.” He said waves as high as 25 feet (7.6 meters) washed away the pier — an iconic landmark — just two doors down from his home.

“We watched it hit the pier and saw the pier disappear,” said Wilder, whose house sits about 30 feet (9 meters) above the ocean and stayed dry inside. “We watched it crumble and and watched it float by with an American flag still floating.”

The Pawleys pier was one of at least four along South Carolina’s coast to be destroyed during Ian’s winds and rain. Portions of the pier, including barnacle-covered pylons, littered the beach. The intracoastal waterway was littered with the remnants of several boat houses torn apart and knocked off their pilings in the storm.

Traffic was shut off to Pawleys Island’s southernmost point, where crews were working to clear roadways of sand and other debris that officials said has been piled at least a foot high. The sand will later be redistributed to build back the dunes along the beach front, as happened after similar washing over in 2019.

Many of the elevated beach homes still had feet of sand underneath, with dunes completely washed over and nearly flattened.

John Joseph, whose father built the family’s beige beach house in 1962, said Saturday that he was elated to return from Georgetown — which took a direct hit — to find his Pawleys Island home entirely intact.

“Thank God these walls are still here, and we feel very blessed that this is the worst thing,” he said of the sand swept under his home. “What happened in Florida — gosh, God bless us. If we’d had a Category 4, I wouldn’t be here.”

In North Carolina, the storm appeared to have mainly downed trees and power lines, leaving over 280,000 people across the state without power late Saturday morning, according to state officials.

At least one fatality connected to the storm was reported in Johnston County, outside of Raleigh. A woman found her husband dead early Saturday after he went to check on a generator running in their garage overnight, sheriff’s office Capt. Jeff Caldwell said.

The storm’s winds were much weaker Friday than during Ian’s landfall on Florida’s Gulf Coast earlier in the week. Authorities and volunteers there were still assessing the damage as shocked residents tried to make sense of what they just lived through.

Anthony Rivera, 25, said he had to climb through the window of his first floor Fort Myers apartment during the storm to carry his grandmother and girlfriend to the second floor. As they hurried to escape the rising water, the storm surge had washed a boat right up next to his apartment.

“That’s the scariest thing in the world because I can’t stop no boat,” he said. “I’m not Superman.”

Other distraught residents waded through knee-high water Friday, salvaging what possessions they could from their flooded homes and loading them onto rafts and canoes.
“I want to sit in the corner and cry. I don’t know what else to do,” Stevie Scuderi said after shuffling through her mostly destroyed Fort Myers apartment, the mud in her kitchen clinging to her purple sandals.

On Saturday, a long line of people waited outside an O’Reilly’s auto parts store in Port Charlotte, where a sign read, “We have generators now.” Hundreds of cars were lined up outside a Wawa gas station, and some people walked, carrying gas cans to their nearby cars.