The NFL’s handling of concussions has evolved dramatically from the days when players were given smelling salts on the bench and sent back into the game.

The league and the NFL Players Association have implemented extensive protocols and hired unaffiliated neurotrauma consultants (UNC) to work with team physicians at each game to diagnose concussions. 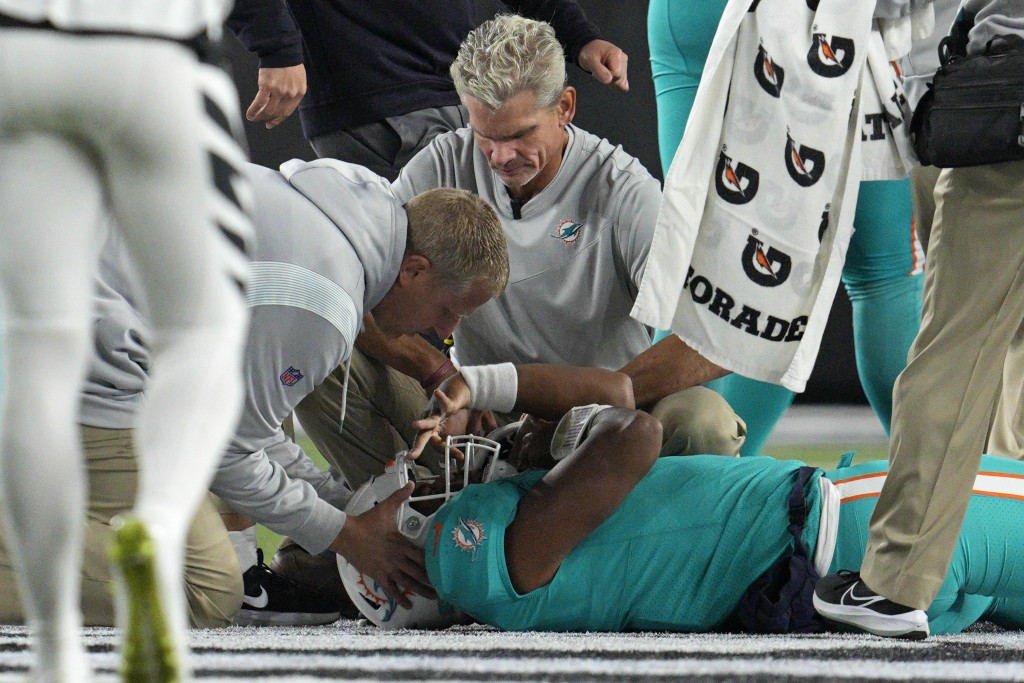 Miami Dolphins quarterback Tua Tagovailoa is examined during the first half of the team’s NFL football game against the Cincinnati Bengals, Thursday, Sept. 29, 2022, in Cincinnati. (AP Photo/Jeff Dean)

Still, football is a violent sport and injuries similar to the frightening one Miami Dolphins quarterback Tua Tagovailoa suffered Thursday night seem unavoidable unless the NFL bans tackling and turns the game into flag football like it did for the Pro Bowl.

That’s not happening, and the most effective means of protecting players remains enforcing strict concussion protocols, which players, fans and others are concerned didn’t happen with Tagovailoa.

It would be difficult to prevent what happened to Tagovailoa when 6-foot-3, 340-pound Bengals defensive tackle Josh Tupou slammed him backward into the turf. The main question is why he was even playing just four days after he stumbled off the field and was unable to walk following a hit to his head during a home game against Buffalo.

Tagovailoa’s hands froze up and his fingers flexed awkwardly in front of his facemask for several seconds as he laid on the turf in Cincinnati, a scary scene witnessed by millions of viewers. He remained on the ground for several minutes until he was taken away on a stretcher and sent to a hospital.

This time — unlike Sunday when he seemed to exhibit concussion symptoms but was cleared by a team physician and UNC to return — Tagovailoa was diagnosed with a concussion. He was released from the hospital and flew home with the team. Flying hours after suffering a concussion raised questions, but NFL chief medical officer Dr. Allen Sills said the hospital makes that decision.

Tagovailoa’s quick return Sunday prompted a joint review by the NFL and NFLPA. The interview process has started and results aren’t expected for at least another week. Tagovailoa and the team explained his legs were wobbly because of a back injury.

It’s unknown whether there’s any correlation between the two incidents. Concussions are common in the NFL, especially when a player is thrown to the ground by a man Tupou’s size and his head hits the turf.

Sills said “it’s impossible to know” if the injury Tagovailoa sustained Thursday was exacerbated by the hit he took Sunday.

“That’s one of the factors that we want to look at,” Sills said on NFL Network. “Every injury is one we want to prevent.”

Chris Nowinski, a founder of the Concussion Legacy Foundation who played football at Harvard, is adamant Tagovailoa sustained a concussion against Buffalo and shouldn’t have played at Cincinnati.

“Tua showed five distinct signs of concussion,” Nowinski told The Associated Press. “Anybody who has any training on concussions or cares about Tua as a human is not putting him on field four days after what he showed on Sunday, so this makes it so much worse because we know that this could be career-ending or season-ending. It should be season-ending, in my opinion. And it just shows just a lack of care for him as a human being.”

The league and the NFLPA instituted concussion protocols in 2011 when Colt McCoy took a helmet-to-helmet hit in a game and returned without being tested for a concussion. The protocols have been expanded since.

There are three UNCs, who are paid jointly by the NFL and NFLPA, at each game. They work in conjunction with team physicians to diagnose whether a player has a concussion. Independent certified athletic trainers (ATC spotters) sit in a booth and monitor the players on the field to have someone removed from the game if they see an impact to the head. Team trainers, coaches or physicians, teammates, game officials, sideline UNCs or booth ATCs also can initiate the protocol.

All players who undergo any concussion evaluation on game day must have a follow-up evaluation conducted the following day by a member of the medical staff. Sills said Tagovailoa was evaluated every day leading up to the game, even though he wasn’t in concussion protocol.

Several players have spoken about passing protocol even when they had concussions. Andrew Whitworth, the former Rams offensive lineman, said on Amazon’s broadcast he once played through a concussion during a game until a teammate noticed he wasn’t right and alerted doctors.

The league has experimented with other means to mitigate head injuries. This year, offensive linemen, defensive linemen, tight ends and linebackers were required for the first time to wear Guardian Caps — a soft-shell, padded covering on top of their helmets — during practices from the start of training camp until the second preseason game.

The average number of concussions among those positions groups dropped from 23 over the previous three-year period to 11 this summer, the league said. Of those 11 concussions, six resulted from blows to the facemask, which didn’t have added protection.

Tagovailoa is under pressure to perform this season and has battled injuries in the past, so it’s natural for him to want to play regardless of injury. Former players who have criticized the decision to let him play Sunday say they want to protect players from themselves.

“We are all outraged by what we have seen the last several days and scared for the safety of one of our brothers,” NFLPA president JC Tretter wrote on Twitter. “What everyone saw both Sunday and last night were ‘no-go’ symptoms within our concussion protocols. The protocols exist to protect the player and that is why we initiated an investigation. Our job as the NFLPA is to take every possible measure to get the facts and hold those responsible accountable. We need to figure out how and why the decisions were made last Sunday to allow a player with a ‘no-go’ symptom back on the field.

“Until we have an objective and validated method of diagnosing brain injury, we have to do everything possible, including amending the protocols, to further reduce the potential of human error. A failure in medical judgment is a failure of the protocols when it comes to the well being of our players. We have come a long way over the past 15 years but the last week proves how far we have left to go.”

The decision to allow Tagovailoa to return Sunday was made by the team physician and UNC. It was determined Tagovailoa’s instability was caused by a back injury. The joint review by the league and NFLPA will examine the steps taken and a report will be issued.

“Based on everybody I’ve talked to and I know a lot of doctors who are brain injury people and sports medicine people, I don’t know anybody who thinks it’s sound medicine just based on the observation of what was seen on the field and him stumbling afterward to say it’s OK for him to play again in that game and then four days later,” said attorney Brad Sohn, who has represented hundreds of players in concussion litigation and is among the possible successors to NFLPA executive director DeMaurice Smith.

NFL spokesman Brian McCarthy said there has never been an incident where a team physician and the UNC disagreed about a concussion.

In 2017, Seattle was fined $100,000 and the coaching and medical staffs were required to attend remedial training regarding the protocol after a joint review determined the team didn’t follow the protocol when Russell Wilson was directed to the sideline for an evaluation after the referee, Walt Anderson, concluded that a medical examination was warranted.