INDIANAPOLIS (AP) — Derrick Henry rushed for a season-high 114 yards and one touchdown and Tennessee’s defense held up late Sunday to preserve the Titans’ 24-17 victory.

Tennessee (2-2) has won a franchise-record four straight in the series and improved to 11-2 against AFC South opponents since 2020. 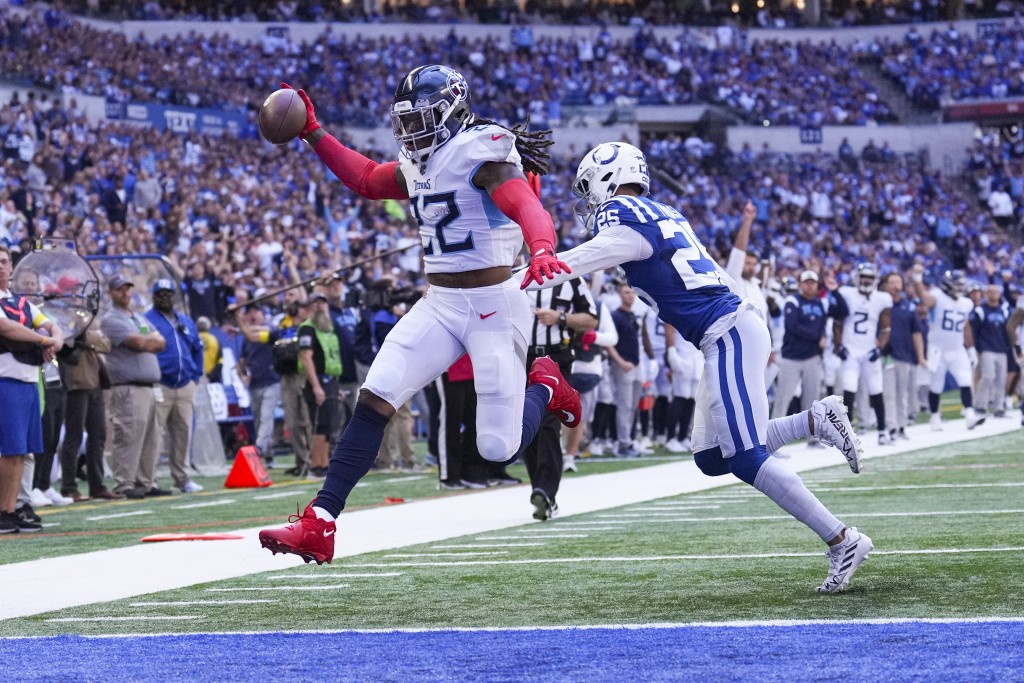 Indy (1-2-1) has one win in its past six games and blew late three scoring chances that could have cut the deficit to less than seven.

The Titans followed a familiar script by leaning heavily on the two-time NFL rushing champ early and held on despite scoring no second-half points for the second consecutive week.

Henry broke a bone in his right foot during last season’s trip to Indy and hadn’t looked like himself in the first three games.

But on Sunday, his bruising style was back with a bang. Against the league’s No. 3 run defense, Henry topped the 100-yard mark for the fifth time in six games against Indy and he only needed one half to do it as the Titans took a commanding 24-3 lead.

Tennessee converted Matt Ryan’s fumble on Indy’s opening drive into a 7-yard TD pass from Ryan Tannehill to Robert Woods and Henry made it 14-0 when he made a defender miss in the backfield and sprinted 19 yards to the end zone.

After trading field goals, Tannehill found Chig Okonkwo on an 8-yard TD pass to make it 24-3.

The Colts answered with Ryan’s 14-yard TD pass to Mo Alie-Cox and cut the deficit to 24-17 when Ryan and Alie-Cox hooked up on another TD pass midway through the third quarter.
But a sack knocked Indy out of field-goal range on the final play of the third quarter, Jonathan Taylor lost a fumble on the Colts’ next series and Chase McLaughlin missed a 51-yard field goal with 1:58 to play.

INJURY REPORT
Titans: Starting linebacker Zach Cunningham (elbow) and starting safety Amani Hooker (concussion) missed the game. Linebacker Bud Dupree returned but reinjured his hip in the first half. Rookie receiver Treylon Burks did not return after being carted to the locker room in the second half with a right foot injury.

Colts: Three-time All-Pro linebacker Shaquille Leonard (back surgery) made his season debut but it didn’t last long. He went to the locker room after colliding with a teammate in the second quarter and was diagnosed with a concussion. Taylor, the defending rushing champ, left late with an injured ankle.

UP NEXT
Titans: Head to Washington next Sunday.
Colts: Visit Denver on Thursday night.