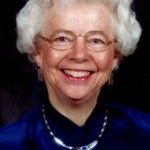 Shirley Winifred Carter was born, February 17, 1931 to Winfred Harold Carter and Mildred Eleanor Moseley Carter in Martin, Tennessee.   The Carter family moved to Paris in 1934 when Shirley was 3 years old. She attended Lee School and graduated from Grove High School in 1949.  She received a bachelors degree in Mathematics and teachers certificate from Murray State University.

Shirley married Joseph E. Casey, December 26th, 1951. While Joe served in the Air Force, The Caseys lived in Colorado, California, and Florida before returning to their hometown of Paris, Tennessee in 1955.  They had 4 children, Michael, Carol, John, and Susan.   Shirley was an educator for many years, teaching 7th and 8th grade Math at Grove Junior High School, serving as a substitute teacher at Henry County High School, a home bound teacher, a private tutor, and later, she became the first coordinator for the Henry County Adult Education Program.

Always active in the community, she was a longtime volunteer for Helping Hand, a board member for Friends of the Tennessee National Wildlife Refuge, and served as a board member and a term as President of the Henry County Arts Council.

She also enjoyed camping with family and longtime friends, water skiing, gardening, birding, crafting, sewing and quilting, and many other activities.

She was a long time member of First Christian Church of Paris, TN.

Shirley and Joe moved to Louisville, Tennessee to be near their children and grandchildren in 2020.

Memorials in honor of Shirley can be made to:

Paris Academy of the Arts Association