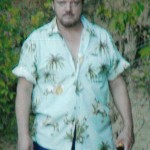 Richard was born October 6, 1949 in Middleton, the son of the late Marlin Laverne Smalley and Ruby Luttrell Smalley. He graduated from Middleton High School, Miller Hawkins Business College in Memphis and Maharishi International University in Fairfield, Iowa. He served his country in the United States Army and was a paratrooper from 1969 until 1971.

Richard was employed as a real estate broker for many years. He also worked on the pipelines in Montana and was a manager and caregiver at Quinco in Bolivar before his retirement. He built his own house out of cedar cord wood and enjoyed pottery, jewelry and stained glass. He was an avid reader, especially of history and military books, and was an outdoorsman who loved camping, canoeing and collecting arrowheads.

In addition to his parents, he was preceded in death by his sister, Brenda Kay Smalley; his brother, Dwaine Smalley; and his nephew, Howie Mumford III.