KYIV, Ukraine (AP) — Waves of explosives-laden suicide drones have struck Ukraine’s capital, setting buildings ablaze and tearing a hole in one of them. The attack sent people scurrying for shelter and came a week after Russia unleashed its most widespread strikes against the country in months. Authorities said four people died. Air attacks in central Kyiv were rare in recent months, and the concentrated use of drones sowed terror and frayed nerves. One drone slammed into a residential building. Energy facilities were also among the targets. Drones used in the attack appeared to include Iranian-made Shaheds. Analysts believe those slower-moving drones can be programmed to accurately hit certain targets using GPS, unless the system fails. 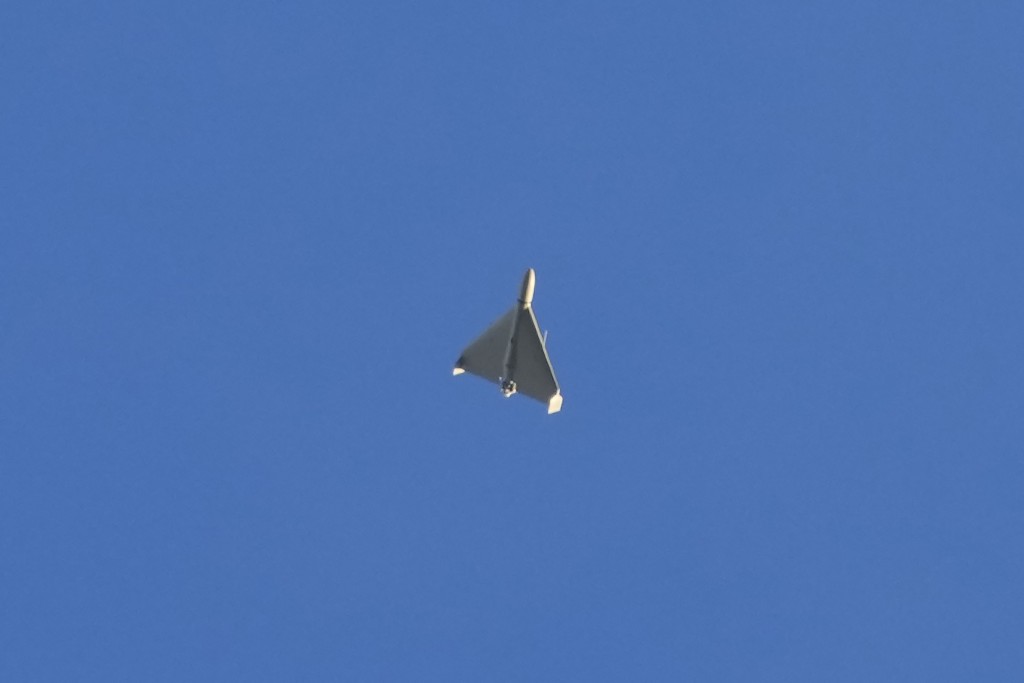 A drone is seen in the sky seconds before it fired on buildings in Kyiv, Ukraine, Monday, Oct. 17, 2022. (AP Photo/Efrem Lukatsky)

KYIV, Ukraine (AP) — Waves of explosives-laden suicide drones struck Ukraine’s capital Monday, setting buildings ablaze and tearing a hole in one of them. People scurried for shelter or tried to shoot down the kamikazes. 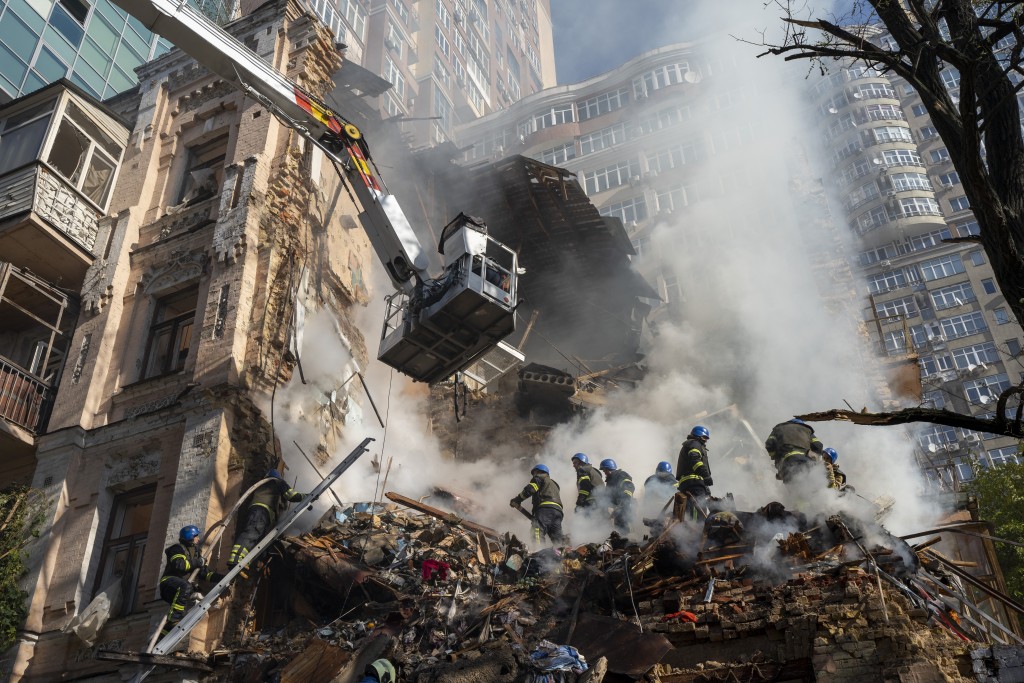 The concentrated use of the drones was the second barrage in as many weeks — after months in which air attacks had become become a rarity in central Kyiv. The assault sowed terror and frayed nerves as blasts rocked the city. Energy facilities were struck and one drone largely collapsed a residential building, killing four people, authorities said.

Intense, sustained bursts of gunfire rang out as the Iranian-made Shahed drones buzzed overhead, apparently from soldiers trying to destroy them. Others headed for shelter, nervously scanning the skies. But Ukraine has become grimly accustomed to attacks nearly eight months into the Russian invasion, and city life resumed as rescuers picked through debris.

Previous Russian airstrikes on Kyiv were mostly with missiles. Analysts believe the slower-moving Shahed drones can be programmed to accurately hit certain targets using GPS unless the system fails.

Mayor Vitali Klitschko said Monday’s barrage came in successive waves of 28 drones — in what many fear could become a more common mode of attack as Russia seeks to avoid depleting its stockpiles of long-range precision missiles.

Five drones plunged into Kyiv itself, said Prime Minister Denys Shmyhal. In the Kyiv region, at least 13 were shot down, all flying in from the south, said Yurii Ihnat, a spokesman for Ukraine’s air force.

One strike appeared to target the city’s heating network, hitting an operations center. Another slammed into a four-story residential building, ripping open a gaping hole and collapsing at least three apartments on top of each other. Four bodies were recovered, including those of a woman who was 6 months pregnant and her husband, Klitschko said. An older woman and another man also were killed there.

An Associated Press photographer caught one of the drones on camera, its triangle-shaped wing and pointed warhead clearly visible against the blue sky.

“The whole night, and the whole morning, the enemy terrorizes the civilian population,” Ukrainian President Volodymyr Zelenskyy said in a social media post. “Kamikaze drones and missiles are attacking all of Ukraine.”

“The enemy can attack our cities, but it won’t be able to break us,” he wrote.

Andrii Yermak, head of the presidential office, posted on social media that Shahed drones were used.

Zelenskyy, citing Ukrainian intelligence services, has previously alleged Russia has ordered 2,400 of the drones from Iran. Russia has rebranded them as Geran-2 drones — meaning “geranium” in Russian. A photo of debris from one of Monday’s strikes, posted by Klitschko, showed the word Geran-2 marked on a mangled tail fin.

Iran has previously denied providing Russia with weapons, although its Revolutionary Guard chief has boasted about providing arms to the world’s top powers, without elaborating.

The drones pack an explosive charge and can linger over targets before nosediving into them. Their blasts jolted people awake. They included Snizhana Kutrakova, 42, who lives close to one of the strikes.

EU foreign policy chief Josep Borrell said the 27-nation bloc is gathering evidence about Iran’s drone sales to Russia, and if the allegations are true, “we will be ready to react with the tools at our disposal.” The EU also approved a military training program in Europe for thousands of Ukrainian troops and plans for about 500 million euros ($486 million) in extra funds to buy weapons for Ukraine.

Iranian-made drones have been used elsewhere in Ukraine in recent weeks against urban centers and infrastructure, including power stations. At just $20,000 apiece, the Shahed is only a fraction of the cost of higher-tech missiles and conventional aircraft. The Kalibr cruise missile that Russia has used widely in Ukraine costs the Russian military about $1 million each.

Drone swarms also challenge Ukrainian air defenses. Western nations have promised systems that can shoot down drones but much of that weaponry has yet to arrive in Ukraine and, in some cases, may be months away.

“The challenges are serious because the air defense forces and means are the same as they were at the beginning of the war,” said Ihnat, the air force spokesman. Some air defense weaponry supplied by the West can only be used during daylight hours when targets are visible, he added.

Shmyhal, the prime minister, said hundreds of settlements were without power after missile attacks on critical infrastructure in the Dnipropetrovsk and Sumy regions.

Ukraine’s nuclear operator said Russian shelling cut off power again to the Zaporizhzhia Nuclear Power Plant, one of the most worrying flashpoints of the Russian invasion.

The nuclear plant, Europe’s largest, needs power for critical safety systems. When shelling severs its power supply lines, the plant is forced to fall back on diesel generators – a temporary stopgap.

Russian President Vladimir Putin had said Friday that there was no need for more widespread attacks against Ukraine — after a barrage of strikes earlier in the week that he said were retaliation for the bombing of a bridge connecting Ukraine’s Russian-occupied Crimean Peninsula with Russia.

However, Putin also said that seven of 29 targets designated after the bridge attack were not hit “the way the Defense Ministry had planned,” so Moscow’s forces would continue to target them. He didn’t specify the targets.

After months during which strikes in central Kyiv were rare, last week’s attacks put the country and its capital back on edge.

Monday’s strike on Kyiv came amid intensified fighting in the eastern regions of Donetsk and Luhansk, as well as a continued Ukrainian counteroffensive in the south near Kherson and Zaporizhzhia. Zelenskyy said Sunday that there was heavy fighting around the cities of Bakhmut and Soledar in the Donetsk region.

The Donetsk and Luhansk regions make up the industrial east known as the Donbas, and were two of four regions annexed by Russia in September in defiance of international law.

In the south, Ukrainian air forces reported shooting down nine drones over the Mykolaiv region and six more over the Odesa region. The governor of the eastern Kharkiv region said overnight attacks on a city and villages killed one woman and injured four more people.