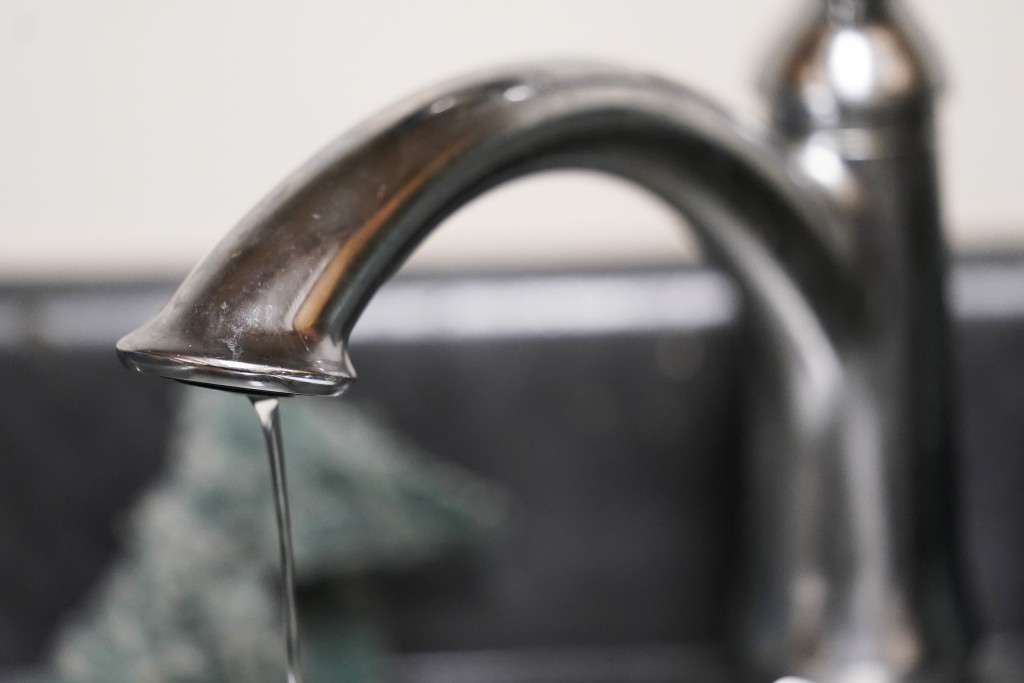 FILE – A trickle of water comes out of the faucet of Mary Gaines a resident of the Golden Keys Senior Living apartments in her kitchen in Jackson, Miss., Sept. 1, 2022. The NAACP said Tuesday, Sept. 27, that Mississippi is discriminating against Jackson’s majority-Black population by diverting badly needed federal funds for drinking water infrastructure to white communities that needed it less. (AP Photo/Steve Helber, File)

The announcement came days after leaders of two congressional committees said they were starting a joint investigation into a crisis that left most homes and businesses in Jackson without running water for several days in late August and early September.

Heavy rainfall in late August exacerbated problems at Jackson’s main water treatment facility. Republican Gov. Tate Reeves declared an emergency Aug. 29, and the state health department and the Mississippi Emergency Management Agency have been overseeing operations and repairs at the facility since then.

About 80% of Jackson’s 150,000 residents are Black, and about a quarter of the population lives in poverty. By the time Reeves issued the emergency order, Jackson residents had already been told for a month to boil their water to kill possible contaminants. Volunteers and the National Guard had distributed millions of bottles of drinking water. Although the boil-water notice was lifted in mid-September, many residents remain skeptical about water safety.

NAACP President Derrick Johnson, who lives in Jackson with his family, called the EPA investigation a step in the right direction after years of the state withholding federal funds to improve the city’s water system.

Johnson was named among several residents in the NAACP’s civil rights complaint against Mississippi. He said the state’s inaction and record of divestment in Jackson amounts to “systemic neglect.”

“We believe that all citizens of this country should be entitled to clean, fresh drinking water,” Johnson said. “Unfortunately, we live in a state that is still dealing in racial politics. And as a result of that, you have state leaders who seek to penalize African American residents of the city of Jackson in a very discriminatory way.”

The AP reported in September that years before Reeves became governor, he touted his own track record of fiscal conservatism by citing his opposition to spending state money for Jackson’s crumbling water and sewer infrastructure. The EPA is not investigating Reeves.

Reeves said Thursday that the state took control of Jackson’s water system because of “absolute and total incompetence” of the city’s Democratic mayor and administration. The governor’s latest remarks are an escalation of a dispute between him and Mayor Chokwe Antar Lumumba over whether the state or the city will decide on a private firm to operate Jackson’s water system.

“They have proven that they have no ability to manage the water system,” Reeves told reporters during an event at the Governor’s Mansion, according to a video of the event by WLBT-TV.

A city spokeswoman said Lumumba would not respond to the governor’s statements.

In a federal complaint Sept. 27, the NAACP said Mississippi officials “all but assured” a drinking water calamity by depriving Jackson of badly needed funds to upgrade its infrastructure. The organization asked the EPA to investigate the state’s alleged pattern of steering money to majority-white communities with less need.

The group said the state’s refusal to fund improvements in Jackson culminated in the near-total collapse of the water system in late August. Over 25 years, Jackson received funds from an important federal program only three times, the NAACP said. When Jackson tried to fund improvements itself, those efforts were repeatedly blocked by state political leaders, according to the complaint.

The NAACP wants the EPA to make sure that from now on, federal funds are distributed equitably.

Reeves said Thursday that the state has bought chemicals and hired workers for the water plant since he declared the emergency, after the city failed to do both of those things.

The NAACP filed its complaint under Title VI of the Civil Rights Act of 1964, which forbids recipients of federal funds from discriminating based on race or national origin. While previously the law was rarely used to pursue environmental matters, the Biden administration has increased its enforcement efforts in communities overburdened by pollution.

Recently, the EPA said it had preliminary evidence that Louisiana officials allowed air pollution to remain high and downplayed the threat to Black residents who live in the industrial section of the state commonly referred to as cancer alley. The agency has also opened up an investigation into Colorado’s air permitting program and into state and local officials in Alabama over chronic wastewater problems in majority-Black Lowndes County.