A powerful system continues to build out to the west with a deep trough of low pressure that will dig deep into the south today. A developing surface low will form along a quick moving cold front to bring storms to the area on Tuesday. Out ahead of the system, it will continue to be breezy, warm, and more humid weather overnight into Tuesday morning.

**A Wind Advisory For 9AM Until 7PM Tuesday** 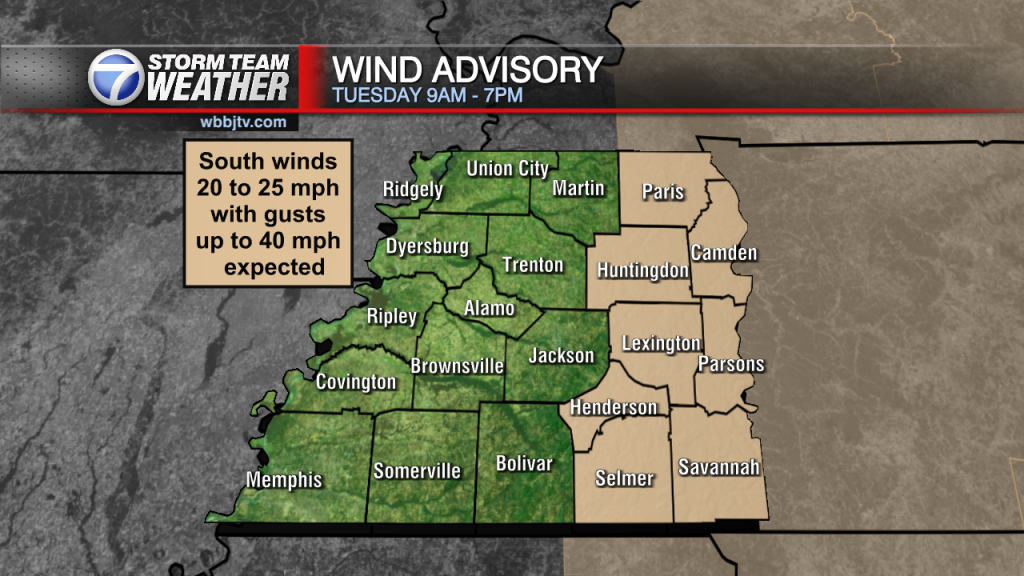 Increasing clouds with a few scattered showers after midnight. Lows will drop into the mid 60s with breezy winds from 5 to 15 mph out of the south and gusts as high as 25 mph.

Breezy south winds of 10 to 20 mph will be with us in the morning hours with mostly cloudy skies. Storms will push through late morning into early afternoon with winds gusting at times as high as 40 mph and higher in some of the storms. Highs will make it into the upper 60’s to around 70 degrees before the cold front pushes through in the afternoon. Turning sharply colder by evening as winds will shift more from the west and northwest by dark with lows dropping to the lower 40’s by Wednesday morning.

Gusty winds and severe storms will move over the Mississippi River around 9AM in the morning and continue into the viewing area late morning into the mid afternoon. Storms will be capable of producing damaging winds. 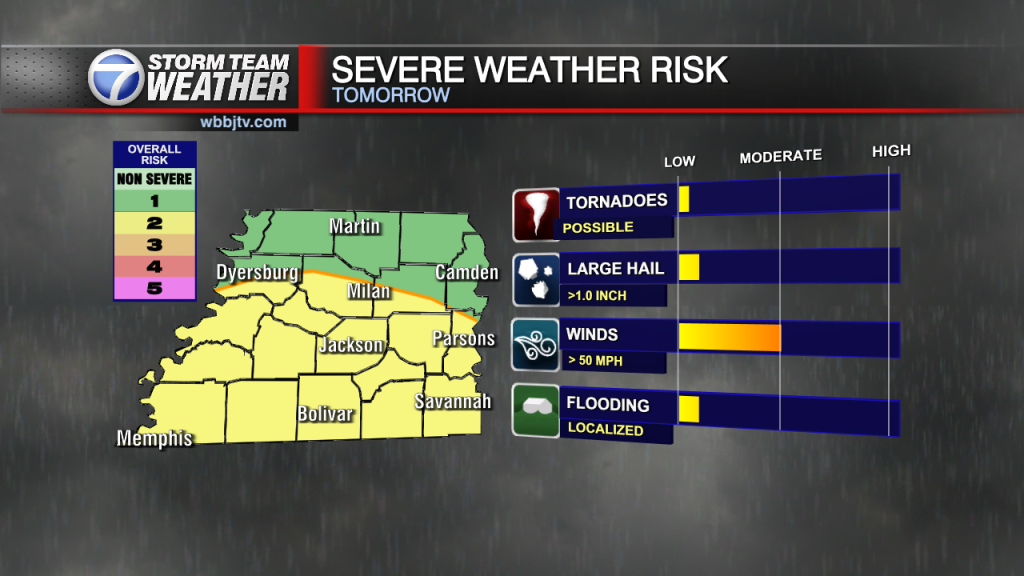 **Storms will become likely by early afternoon Tuesday as a powerful upper level system moves trough the area. At the surface will be a fast moving cold front and winds will be gusty around a strong area of low pressure. Storms will develop quickly late morning to the west and approach west Tennessee in the early afternoon. 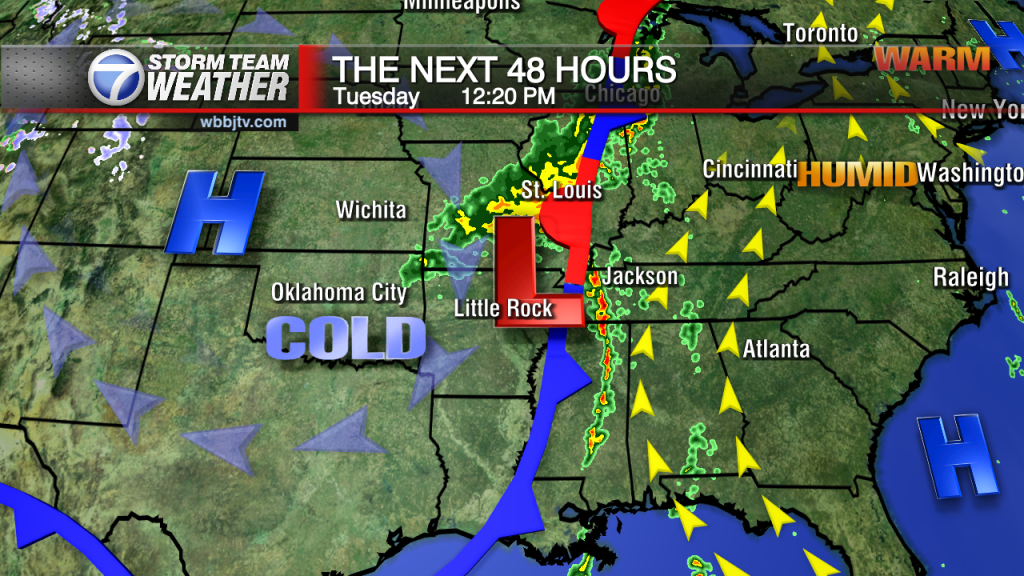 Winds will strong at times ahead of the storms, during the storms, and after the storms roll through so bring in loose objects from outside and make sure the lawn furniture and trash can are in a good place away from the wind. 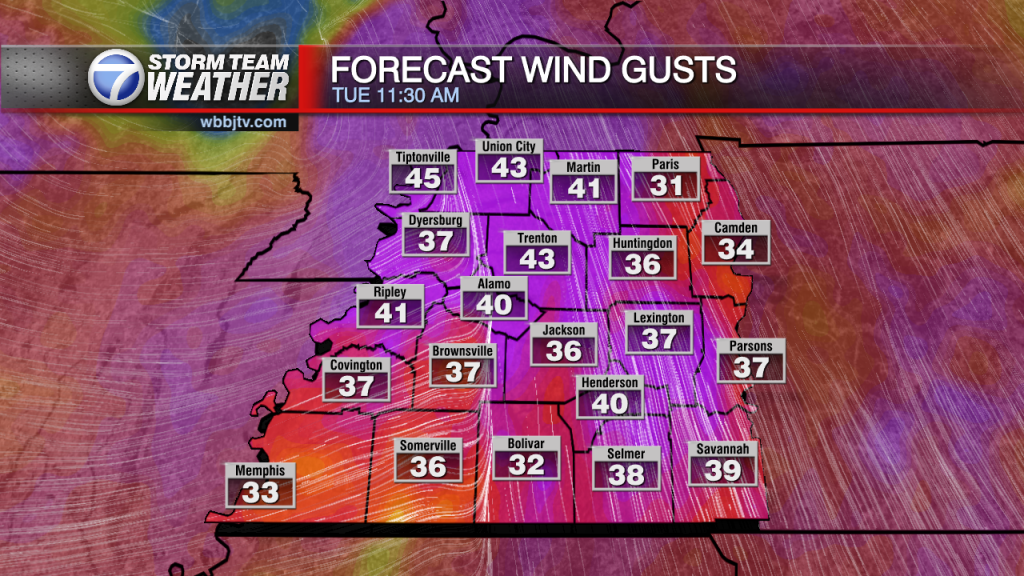 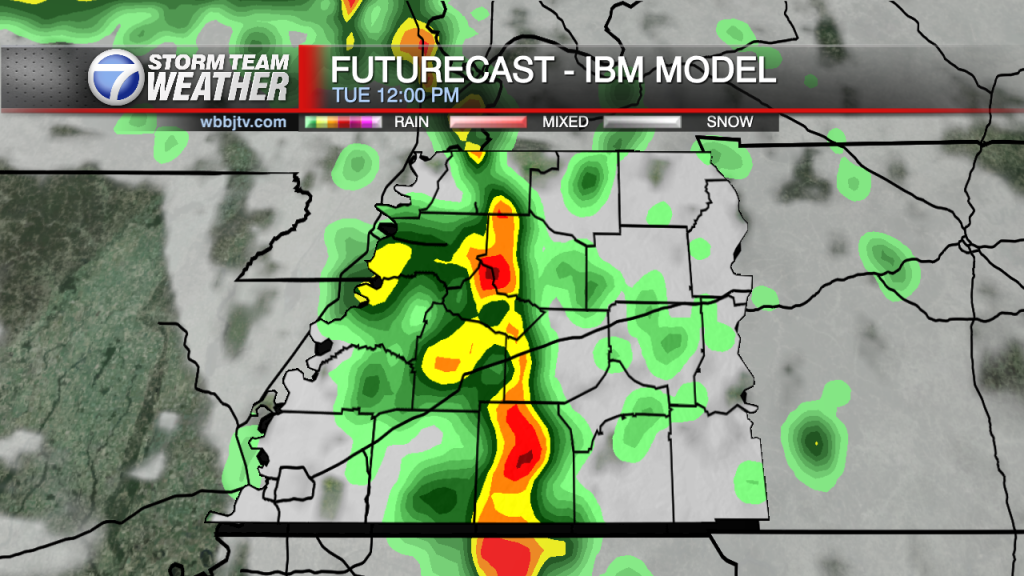 The cold front will bring much cooler air to the region Tuesday night into Wednesday as highs return to the 60’s in the day and lows in the lower 40’s for both Wednesday and Thursday morning. We’ll warm a bit ahead of our next system on Friday to the lower 70’s with a chance of rain late Friday night. Saturday looks to include some spotty showers that may linger into the start of Sunday.

All of West Tennessee saw our first frost and freeze earlier in October and more cold spells will be on the way this fall. There currently doesn’t appear to be any snow chances in the upcoming forecast. On top of the colder weather, we often see storms develop in October and we could see more storms early next week. There will also be more chances for severe weather as October is the start of our second severe weather season.  The tropics have been started out quiet besides Hurricane Ian, they look to remain quiet for the next week or two. You need to stay weather aware to changing weather patterns and monitor the forecasts closely. We got you covered in the WBBJ 7 Storm Team Weather Center as always.

Showers And Windy By Late Saturday, Drier For Sunday