(AP) — Fentanyl and other potent synthetic opioids ingrained in the nation’s illicit drug supply are killing more people in the U.S. than any other drug has. But mistaken beliefs persist about fentanyl, how it is trafficked and why so many people are dying. Heading into key elections, there have been assertions that the drug might be handed out like Halloween candy. That’s something the U.S. Drug Enforcement Agency’s head has said isn’t true. And some candidates for elected office frame the crisis as mostly a border-control issue, though experts say the key to reining in the crisis is reducing demand for the drugs. 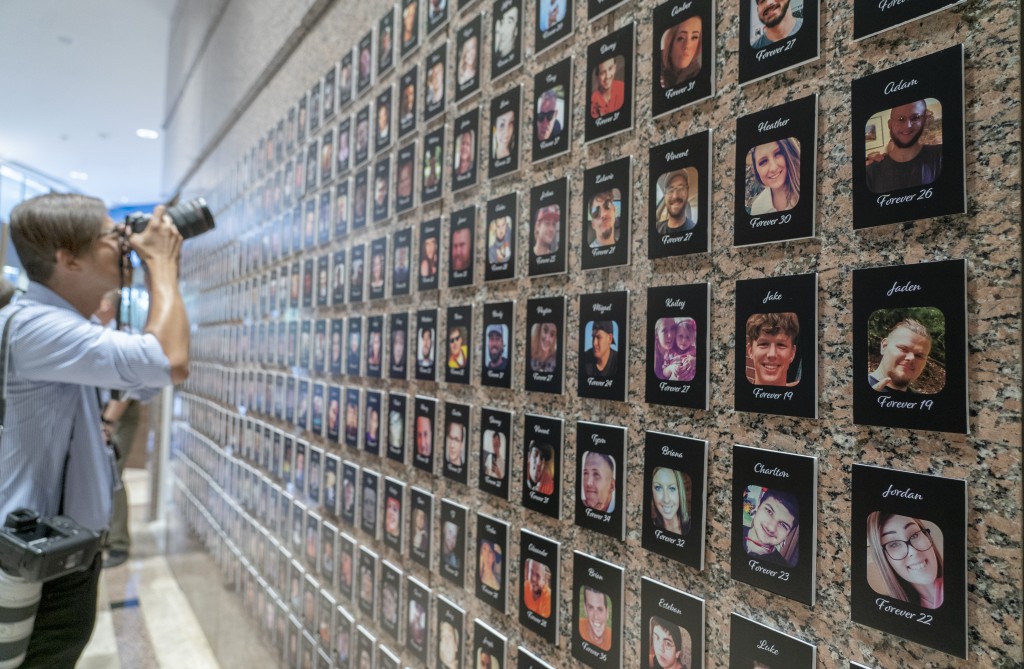 FILE—A photojournalist takes pictures of the exhibits on “The Faces of Fentanyl” at DEA headquarters before a press event at DEA headquarters, Arlington, Va., in this file photo from Sept. 27, 2022. Heading into key elections, there have been assertions that the drug might be handed out like Halloween candy, something the U.S. Drug Enforcement Agency’s head has said isn’t true. And some candidates for elected office frame the crisis as mostly a border-control issue, though experts say the key to reining in the crisis is reducing demand for the drugs.(AP Photo/Gemunu Amarasinghe, File)

Lillianna Alfaro was a recent high school graduate raising a toddler and considering joining the Army when she and a friend bought what they thought was the anti-anxiety drug Xanax in December 2020.

The pills were fake and contained fentanyl, an opioid that can be 50 times as powerful as the same amount of heroin. It killed them both.

“Two years ago, I knew nothing about this,” said Holly Groelle, the mother of 19-year-old Alfaro, who lived in Appleton, Wisconsin. “I felt bad because it was something I could not have warned her about, because I didn’t know.”

The drug that killed her daughter was rare a decade ago, but fentanyl and other lab-produced synthetic opioids now are driving an overdose crisis deadlier than any the U.S. has ever seen. Last year, overdoses from all drugs claimed more than 100,000 lives for the first time, and the deaths this year have remained at nearly the same level — more than gun and auto deaths combined.

The federal government counted more accidental overdose deaths in 2021 alone than it did in the 20-year period from 1979 through 1998. Overdoses in recent years have been many times more frequent than they were during the black tar heroin epidemic that led President Richard Nixon to launch his War on Drugs, or during the cocaine crisis in the 1980s.

As fentanyl gains attention, mistaken beliefs persist about the drug, how it is trafficked and why so many people are dying.

Experts believe deaths surged not only because the drugs are so powerful, but also because fentanyl is laced into so many other illicit drugs, and not because of changes in how many people are using. In the late 2010s — the most recent period for which federal data is available — deaths were skyrocketing even as the number of people using opioids was dropping.

Advocates warn that some of the alarms being sounded by politicians and officials are wrong and potentially dangerous. Among those ideas: that tightening control of the U.S.-Mexico border would stop the flow of the drugs, though experts say the key to reining in the crisis is reducing drug demand; that fentanyl might turn up in kids’ trick-or-treat baskets this Halloween; and that merely touching the drug briefly can be fatal — something that researchers found untrue and that advocates worry can make first responders hesitate about giving lifesaving treatment.

All three ideas were brought up this month in an online video billed as a pre-Halloween public service announcement from a dozen Republican U.S. senators.

A report this year from a bipartisan federal commission found that fentanyl and similar drugs are being made mostly in labs in Mexico from chemicals shipped primarily from China.

In New England, fentanyl has largely replaced the supply of heroin. Across the country, it’s being laced into drugs such as cocaine and methamphetamine, sometimes with deadly results. And in cases like Alfaro’s, it’s being mixed in Mexico or the U.S. with other substances and pressed into pills meant to look like other drugs.

The U.S. Drug Enforcement Agency has warned that fentanyl is being sold in multicolored pills and powders — sometimes referred to as “rainbow fentanyl” — marketed on social media to teens and young adults.

Jon DeLena, the agency’s associate special agent in charge, said at the National Crime Prevention Council summit on fentanyl in Washington this month that there’s “no direct information that Halloween is specifically being targeted or young people are being targeted for Halloween,” but that hasn’t kept that idea from spreading.

Joel Best, an emeritus sociology professor at the University of Delaware, said that idea falls in with a long line of Halloween-related scares. He has examined cases since 1958 and has not found a single instance of a child dying because of something foreign put into Halloween candy — and few instances of that being done at all.

“If you give a dose of fentanyl to kids in elementary school, you have an excellent chance of killing them,” he said. “If you do addict them, what are you going to do, try to take their lunch money? No one is trying to addict little kids to fentanyl.”

In midterm election campaigns, fentanyl is not getting as much attention as issues such as inflation and abortion. But Republicans running for offices including governor and U.S. Senate in Arkansas, New Mexico and Pennsylvania have framed the fentanyl crisis as a result of Democrats being lax about securing the Mexican border or soft on crime as part of a broader campaign assertion that Democrats foster lawlessness.

And when Democrats highlight the overdose crisis in campaigns this year, it has often been to tout their roles in forging settlements to hold drugmakers and distributors responsible.

Relying heavily on catching fentanyl at the border would be futile, experts say, because it’s easy to move in small, hard-to-detect quantities.

“I don’t think that reducing the supply is going to be the answer because it’s so easy to mail,” said Adam Wandt, an assistant professor at John Jay College of Criminal Justice.

Still, some more efforts are planned on the U.S.-Mexico border, including increasing funding to search more vehicles crossing ports of entry. The bipartisan commission found those crossings are where most fentanyl arrives in the country.

The commission is calling for many of the measures that other advocates want to see, including better coordination of the federal response, targeted enforcement, and measures to prevent overdoses for those who use drugs.

The federal government has been funding efforts along those lines. It also publicizes bigfentanylseizures by law enforcement, though it’s believed that even the largest busts make small dents in the national drug supply.

The commission stopped short of calling for increased penalties for selling fentanyl. Bryce Pardo, associate director of the RAND Drug Policy Research Center and a commission staff member, said such a measure would not likely deter the drug trade. But, he said, dealers who sell the products most likely to cause death — such as mixing fentanyl into cocaine or pressing it into fake Xanax — could be targeted effectively.

One California father who lost his 20-year-old daughter is pushing for prosecutors to file murder charges against those who supply fatal doses.

Matt Capelouto’s daughter Alexandra died from half a pill she bought from a dealer she found on social media in 2019, while home in Temecula, California, during a college break. She was told the pill was oxycodone, Capelouto said, but it contained fentanyl.

The dealer was charged with distributing fentanyl resulting in death, but he reached a plea deal on a lesser drug charge and will face up to 20 years in prison.

“It’s not that arresting and convicting and putting these guys behind bars doesn’t work,” Capelouto said. “The fact is we don’t do it enough to make a difference.”

While some people killed by fentanyl have no idea they’re taking it, others, particularly those with opioid use disorder, know it is or could be in the mix. But they may not know how much is in their drugs.

That was the case for Susan Ousterman’s son Tyler Cordiero, who died at 24 in 2020 from a mixture that included fentanyl after years of using heroin and other opioids.

For nearly two years, Ousterman avoided going by the gas station near their home in Bensalem, Pennsylvania, where her son fatally overdosed. But in August, she went to leave two things there: naloxone, a drug used to reverse overdoses, and a poster advertising a hotline for people using drugs to call so the operator could call for help if they become unresponsive.

Ousterman is funneling her anger and sorrow into preventing other overdoses.

AP journalists Lindsay Whitehurst in Washington and Kavish Harjai in Los Angeles contributed. Harjai is a corps members for the Associated Press/Report for America Statehouse News Initiative. Report for America is a nonprofit national service program that places journalists in local newsrooms to report on undercovered issues.

For more AP coverage of the opioid crisis: https://apnews.com/hub/opioids