Families get final say before Parkland shooter is sentenced

FORT LAUDERDALE, Fla. (AP) — Florida school shooter Nikolas Cruz will be sentenced to life in prison this week — but not before the families of the 17 people he murdered get the chance to tell him what they think.

A two-day hearing is scheduled to begin Tuesday that will conclude with Circuit Judge Elizabeth Scherer formally sentencing Cruz for his Feb. 14, 2018, massacre at Parkland’s Marjory Stoneman Douglas High School. Because the jury at his penalty trial could not unanimously agree that the 24-year-old deserved a death sentence, Scherer can only sentence the former Stoneman Douglas student to life without parole — an outcome most of the families criticized. 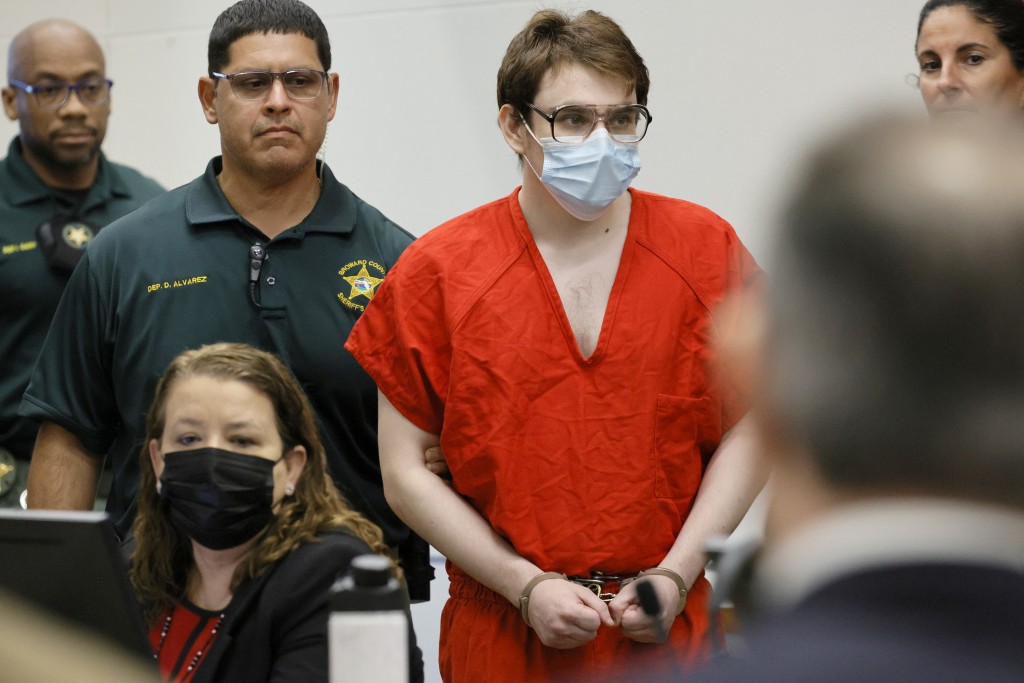 Marjory Stoneman Douglas High School shooter Nikolas Cruz is escorted into the courtroom for a hearing regarding possible jury misconduct during deliberations in the penalty phase of his trial, Friday, Oct. 14, 2022, at the Broward County Courthouse in Fort Lauderdale, Fla. (Amy Beth Bennett/South Florida Sun Sentinel via AP, Pool)

Each family of the 14 students and three staff members Cruz murdered can speak, as can the 17 people he wounded during the seven-minute attack. The families gave highly emotional statements during the trial, but were restricted about what they could tell jurors: They could only describe their loved ones and the murders’ toll on their lives. The wounded could only say what happened to them.

They were barred from addressing Cruz directly or saying anything about him — a violation would have risked a mistrial. And the jurors were told they couldn’t consider the family statements as aggravating factors as they weighed whether Cruz should die.

Now, the grieving and the scarred can speak directly to Cruz, if they choose.

“We are looking forward to speaking without the guardrails that were imposed upon us,” said Tony Montalto, whose 14-year-old daughter Gina was murdered.

Broward County Public Defender Gordon Weekes, whose lawyers represent Cruz, said he has no problem with the families expressing their anger directly to Cruz.

“Rightly so,” Weekes said. The sentencing hearing “is not only an accountability process, but there are also some cathartic pieces that come from it.”

“Hopefully, after expressing (their anger), not only will the community be able to hear the pain they are carrying, the court will be able to hear it and we will move forward.”

Cruz is not expected to speak, Weekes said. He apologized in court last year after pleading guilty to the murders and attempted murders — but families told reporters they found the apology self-serving and aimed at garnering sympathy.

That plea set the stage for a three-month penalty trial that ended Oct. 13 with the jury voting 9-3 for a death sentence — jurors said those voting for life believed Cruz is mentally ill and should be spared. Under Florida law, a death sentence requires unanimity.

Prosecutors had argued that Cruz planned the shooting for seven months before he slipped into a three-story classroom building, firing 140 shots with an AR-15-style semi-automatic rifle down hallways and into classrooms. He fatally shot some wounded victims after they fell. Cruz said he chose Valentine’s Day so it could never again be celebrated at Stoneman Douglas.

Cruz’s attorneys never questioned the horror he inflicted, but focused on their belief that his birth mother’s heavy drinking during pregnancy left him brain damaged and condemned him to a life of erratic and sometimes violent behavior that culminated in the massacre — the deadliest mass shooting to go to trial in U.S. history.

After Cruz is sentenced, he will be transferred from the Broward County jail to the state correctional system’s processing center near Miami, then later to a maximum-security prison, his lawyers have said. The Florida Department of Corrections declined to comment.

Ron McAndrew, a former Florida prison warden, believes that because of Cruz’s notoriety, officials at that prison will place him in “protective management,” separated from other inmates, to keep him from being harmed.

Cruz’s cell will be 9 feet by 12 feet (3 meters by 4 meters) with a bed, metal sink and metal toilet, McAndrew said. For one hour a day, he will be allowed alone into an outdoor cage that is usually 20 feet by 20 feet (6 meters by 6 meters) where he can exercise and bounce a basketball. Florida prisons do not have air conditioning. McAndrew noted that because Cruz has a life sentence, he will be last in line for education and rehabilitation programs.

Cruz will be kept in protective management until prison officials believe it is safe to place him into the general population, a process that could take years, McAndrew said. It is also possible that Florida could send Cruz to another state in exchange for one of its notorious prisoners, so both could have more anonymity, the former warden said.

But eventually, Cruz will be placed in the general population, McAndrew said. He will be required to bunk, work and mingle with other prisoners. At 5-foot-7 (1.4 meters) and 130 pounds (59 kilograms), Cruz could have difficulty defending himself — though he did attack and briefly pin a Broward jail guard. It is possible a more physically imposing prisoner could become his protector — “but that comes with a horrible price,” McAndrew said.

Linda Beigel Schulman, whose son, teacher Scott Beigel, was murdered by Cruz, said she hopes Cruz “has the fear in him every second of his life just the way he gave that fear to every one of our loved ones whom he murdered, or the students and people that he harmed.”

Craig Trocino, a University of Miami law professor, said one benefit of Cruz receiving a life sentence is that he will fade from public view; a death sentence would have brought a decade of appeals, with the possibility of a retrial, and eventually an execution. Each step would have been covered extensively.
“No one is going to hear about him anymore until he dies,” Trocino said.