KNOXVILLE, Tenn. (AP) — No looking ahead for Jalin Hyatt and No. 3 Tennessee. The Volunteers were ready for Kentucky.

Hyatt caught five passes for 138 yards and two touchdowns to lead Tennessee to a 44-6 victory over No. 19 Kentucky on Saturday night. 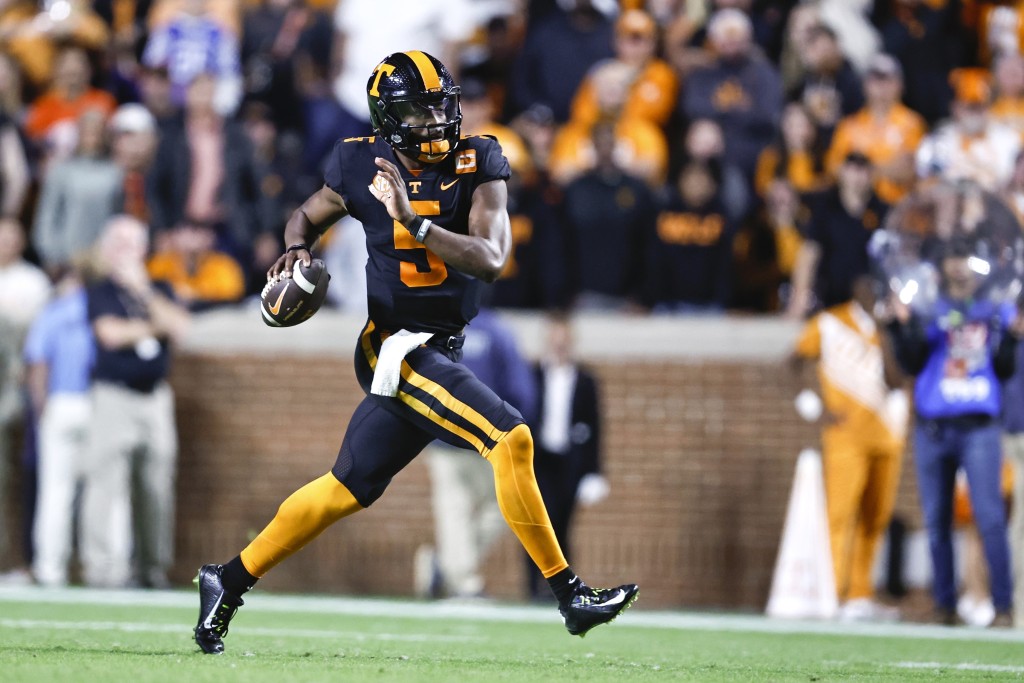 Tennessee quarterback Hendon Hooker (5) rolls out to pass during the first half of an NCAA college football game against Kentucky, Saturday, Oct. 29, 2022, in Knoxville, Tenn. (AP Photo/Wade Payne)

Hyatt broke the school record for touchdown receptions in a season with 14 and set up the Volunteers (8-0, 4-0 Southeastern Conference) for their showdown with No. 1 Georgia next Saturday.
Tennessee is off to its best start since winning the national championship in 1998.

“The first day I took this job, this is what you envision,” Tennessee coach Josh Heupel said. “You’re in the nuts and bolts and continue to grow. These guys wanted to stay (during the coaching transition).”

The Wildcats (5-3, 2-3) struggled in the latest edition of the border rivalry. Will Levis, projected as one of the top quarterbacks in the upcoming NFL draft, was intercepted three times — including two by Doneiko Slaughter, who moved from safety to cornerback to fill a void.

“(Slaughter) trained at corner,” Heupel said. “He did a great job early on. We weren’t healthy at that position.”

“You have to have the mentality you want to be great,” Slaughter said. “I like to be more in the box (at safety), but it’ll grow on me.”

“(Tennessee) beat us in virtually every area,” Kentucky coach Mark Stoops said. “When the game started getting away from us, (Levis is) forcing things. That’s the competitor in him.”

“(Tennessee’s defense was) playing some zones that ended up plugging up a lot of things,” Levis said. “Credit (Tennessee), but most of it was us shooting ourselves in the foot.”

“We’re here to accomplish the goal we set in January,” Hooker said. “We’ll take every opponent seriously. I have to lock into my assignment.”

The Vols led 27-6 at halftime. Hyatt had three receptions for 91 yards, two of them were for touchdowns.

Tennessee S Jaylen McCollough (aggravated assault arrest) and WR Cedric Tillman (high ankle sprain) both returned to action after missing multiple games. McCollough’s attorney has filed a motion arguing self-defense. … Hooker’s 55-yard scoring pass to Hyatt early in the game was his 20th straight game with a TD pass, breaking his own school record. … Each team missed a PAT in the first half — Kentucky’s Matt Ruffolo had his kick blocked and, after a 10-yard penalty, Tennessee’s Chase McGrath was wide right. … Vols S Doneiko Slaughter got his first career interception on a tipped ball in the red zone. Levis made a TD-saving tackle 48 yards later. He got his second pick in the third quarter. … Kentucky, ranked 115th in sacks yielded in the NCAA, gave up four, including two in the first drive of the second half. … Wildcats LB DeAndre Square (ankle) was injured early, came back, but missed the entire second half. … Scoring more than 30 points in 11 straight games is a Tennessee school record.

Kentucky: The Wildcats defense couldn’t slow down the Tennessee offense. Other than Georgia, there are three very winnable games left on the Kentucky schedule.
Tennessee: After beating Alabama a couple weeks ago, the Vols had little left to prove. Even so, they showed they are ready for the showdown with Georgia.

Kentucky: The Wildcats are on the road at Missouri next Saturday, then finish the season at home against Vanderbilt, Georgia and Louisville.
Tennessee: The Vols have a big-time opportunity next Saturday when they travel to Athens for a shot at top-ranked Georgia, the defending national champion.