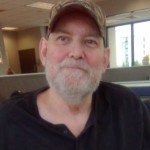 Randy was born December 26, 1958 in Memphis, the son of the late John Edward Segraves and Mary Grace Boland Smith. To his friends, he was known as “The Donut Man” – bringing donuts to people anywhere he went.

Always willing to help anyone and a true example of unconditional love, Randy showed his love to his family and enjoyed family time and good food. He was a lifelong fan of the Pittsburgh Steelers. Even though he was the only man in the house, he made sure his girls knew how to mow a lawn, start a fire and fix a car. Randy will be remembered affectionately by a large group of family and friends.

A gathering of family and friends of Mr. Segraves will be from 11 A.M. until 2 P.M. Saturday, November 12, 2022 at De Terra Winery located at 605 Joyners Campground in Somerville.