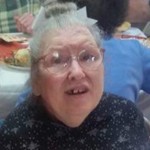 Ann Nita Andrews, age 77, went home to be with Jesus and her family that she had missed so much, and for so long, on October 29, 2022 in Brownsville, Tennessee.

Nita was born October 11, 1945 in Union City, Tennessee, the daughter of the late Herbert S. “Andy” Andrews and Nan C. Holland Andrews. She lived in and around the Obion County area until 2007, when she moved to Brownsville to Crestview Rehabilitation Center, to be closer to her family.

Nita loved any and everything to do with ELVIS! She would jump up to dance every time his music was playing… and the Tennessee VOLS (“because Sis did”). She enjoyed coloring, playing cards, bingo, browsing through her family photo albums, receiving cards and letters, and visitors… oh, how she loved visitors!!

Nita was a Christian and of the Methodist faith and was a lifelong member of Troy United Methodist Church. She once said that her only regret was that she never learned to read, because she would love to be able to read her Bible.

In addition to her parents, she was preceded in death by her sister and brother-in-law, Virginia “Jenny” and Earl McKenzie; her brother, Richard “Ricki” Andrews; her three nieces, Linda McKenzie, Ashley Williams and Abbie Gail Rogers; and her nephew, TyTy Williams.

Graveside Services for Miss Andrews will be held at 10 A.M. Friday, November 4, 2022 at Hebron Cemetery in Stanton.