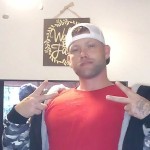 Bubba was born April 2, 1987 in Somerville, Tennessee, the son of the late Jerry Wayne Kimery and Linda Ann Logan. He received his education at Fayette-Ware High School in Somerville and was a lifelong resident of the Moscow area. He was employed as Softee Products and in the construction business, but his passion in life was tattooing. Bubba was a talented tattoo artist who loved drawing and art. He enjoyed being with his family and friends, especially his children, and joking around making people laugh.