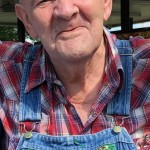 Jim Albert Webb was born on November 19, 1936 at his home in Covington, TN to the late Albert Wooten and Lorene Carver Webb. He departed this life in the early morning hours of October 29, 2022 in his daughter’s home with her by his side. Jim was the fourth child born to the Webb family out of twelve. In addition to his parents, he was proceeded in death by his siblings, Laura, Bill, Mary Francis, Annie Ruth, Martha Jean, Vickie (Squeaky), Bob, and most recently, Joe, who passed away just a little over 24 hours before Jim.

He attended schools in the Williston community until he went to work full time on the family farm. He picked cotton, worked in the cotton gin for Fred T. Fowler in Somerville, hung sheet rock, roofed houses, and was a carpenter by trade having built many homes in Germantown, TN, until his retirement.

During his younger years, Jim was an avid hunter, and was extremely proud of his hound dogs. He, as well as most of the Webb family, were avid readers and during the winter, they would take turns staying up at night reading to keep the fire going to warm the home. The one thing that all of his family and friends could agree on about Jim was that he loved to eat. He would finish off his plate and everyone else’s around him if allowed.

While Jim was a very private man and didn’t travel, he mapped out many locations with his well-worn road atlas. He kept track of the weather better than the farmer’s almanac and notated every weather change on his calendar. A man of extremely high intelligence, he kept dozens of notebooks with various calculations written inside. He probably solved world hunger or found the cure for cancer in those calculations, but he was the only one that knew what they meant.

At the time of their deaths, Jim and Joe were the longest living residents at Maplewood Village Apartments, having been there for 28 years. Jim kept an eye on his brother Joe and vice versa up until the very end. Jim fought a very short battle with cancer, as he was only diagnosed three weeks prior to his death. He spent his final days in his daughter’s home where she and her family spent as much time with him as possible. He was also well cared for by the nurses and staff of Caris Healthcare under hospice care.

Jim is survived by his only daughter, Carrie Dinwiddie (Michael) of Lakeland, TN; his grandchildren, that affectionately called him Gramps, Eric Duke (Samantha Pietenpol) of Colgate, WI, Shelby Collins (Jonathan), Madison Dinwiddie, and Alex Dinwiddie, all of Lakeland, TN. He also leaves behind Bonnie Sinclair of Memphis, TN, Mary Cummins of Collierville, TN, and Russell Sinclair (Hollie) of Hernando, MS. They were like children to him for more than 48 years. He has three surviving siblings, Dan Webb of SC, Nell Haggard of PA, and Sue Palidar of OH, numerous nieces and nephews, his longtime dear friend, Candy Lanzarotto, and his beloved friend and neighbor, Ms. Margaret.

In lieu of flowers, the family requests that memorials be made to St. Jude Children’s Research Hospital, 501 St. Jude Place, Memphis, TN 38105-9959 or a charity of the donor’s choice.