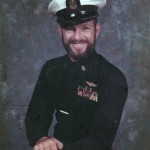 Ward was born on August 11, 1943, to Charlie and Lillie Jackson Smith in Memphis, Missouri.  He served his country faithfully in the United States Navy.  During his military services he received numerous recognitions and awards including the National Defense Medal, the Vietnam Service Medal XII, XIII, XIV, and XV, the Vietnam Campaign Medal, Strike/Flight Air Medal, the Battle “E” Award, and the Navy/Marine Expeditionary Medal.

He is survived by his wife, Sandra I. Smith of Stanton, TN; one son, James D. Huff; two daughters, Heather Bartlett and Laurie Ann Hamed; one sister; Carolyn Stanley and four grandchildren.  He was preceded in death by his parents, Charlie and Lillie Smith, and one sister, Monavee King.

In lieu of flowers, the family has requested memorials be made to St. Jude Children’s Research Hospital, P.O. Box 1000, Dept. 142, Memphis, TN 38101-9908.  All arrangements and services are under the direction of the Lea & Simmons Funeral Home in Brownsville, TN.