KNOXVILLE, Tenn. (AP) — Hendon Hooker threw for 355 yards and three touchdowns and also ran for a score to lead No. 5 Tennessee to a 66-24 victory over Missouri on Saturday.
The Volunteers (9-1, 5-1 Southeastern Conference, No. 5 College Football Playoff) were impressive offensively but had trouble containing a Missouri (4-6, 2-5) attack that has struggled this season. The Tigers rushed for 173 yards, more than any other team against Tennessee this year. 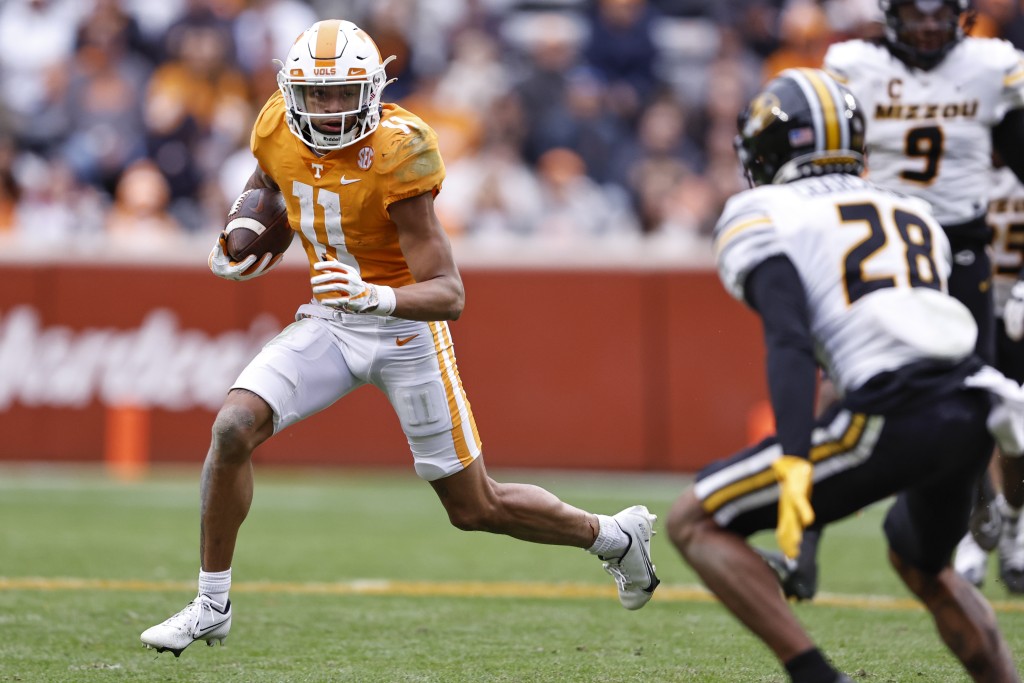 Missouri quarterback Brady Cook did the most damage, running for 106 yards and throwing for 200.

Hooker threw for 229 yards in the first half (17 of 24) as Tennessee led 28-17 at intermission. Cook had 94 yards passing and 86 rushing for Missouri. His late 40-yard scramble set up a Harrison Mevis field goal as time expired.

FACTS & FIGURES
Tennessee WR Cedric Tillman, who missed several games early in the season with an ankle injury, played in the Vols’ last two games. He dressed for warmups Saturday, but after being introduced for Senior Day, changed into street clothes. No reason for his absence was given. … Vols WR Jalin Hyatt became the ninth in school history to go over 1,000 yards receiving. … Hyatt’s 68-yard TD reception put him in sixth place for the SEC single-season touchdown receptions (15). … For the first time in his career, Missouri’s Cook rushed for more than 100 yards.

POLL IMPLICATIONS
Tennessee is in a very precarious situation in terms of the College Football Playoff rankings. The Vols are ranked No. 5, on the outside looking in, with two unranked teams — South Carolina and Vanderbilt — left on the schedule. The Vols have to be watching Oregon and TCU closely, waiting for either to stumble. Both have quality opponents ahead as well as likely conference championship games. All Tennessee can do is win and watch.

THE TAKEAWAY
Missouri: Even with the possibility of a seventh loss looming — the Tigers will be favored against New Mexico State next week but will end the season with a home game against Arkansas — they will still be candidates for a third straight bowl game. Mizzou’s Academic Progress Rate in football is 983. It’s likely high enough for a 5-7 Tigers team to be invited to fill one of the open bowl spots if there aren’t enough 6-6 or better teams.

Tennessee: The primary challenge for the Vols was to get their swagger back after being dismantled by Georgia last week. That mission was accomplished, putting them back on the right track to put their best foot forward in their final two games, at South Carolina and at Vanderbilt.

UP NEXT
Missouri: The Tigers get a breather from the grind of the SEC schedule and will entertain New Mexico State next Saturday night.
Tennessee: Focused on winning as much as generating style points for the College Playoff committee, the Vols will travel to South Carolina for a tough challenge Saturday night.