WASHINGTON (AP) — The Biden administration is no longer accepting applications for student loan forgiveness after a second federal court shut down the program.
“Courts have issued orders blocking our student debt relief program,” the Education Department said on its federal student aid website. “As a result, at this time, we are not accepting applications. We are seeking to overturn those orders.”

Fulfilling a campaign pledge, President Joe Biden announced in August plans to forgive up to $20,000 in federal student loan debt for individuals with incomes below $125,000 or households earning less than $250,000. The White House has estimated that more than 40 million people could qualify. 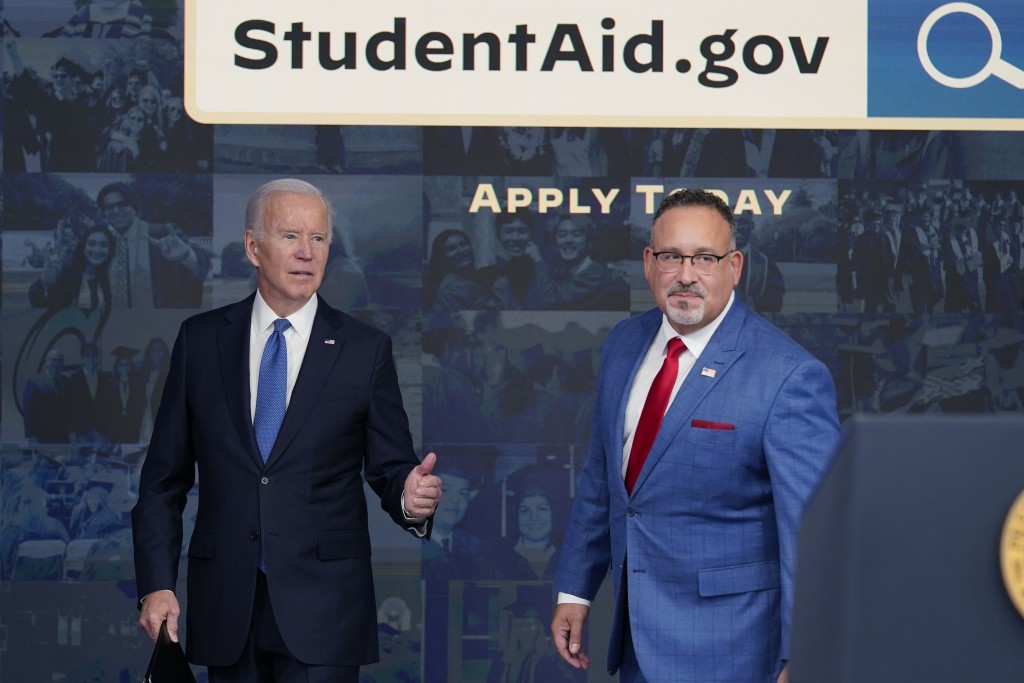 FILE – President Joe Biden answers questions with Education Secretary Miguel Cardona as they leave an event about the student debt relief portal beta test in the South Court Auditorium on the White House complex in Washington, Oct. 17, 2022. The Biden administration is no longer accepting applications for student loan forgiveness after a second federal court shut down the program. (AP Photo/Susan Walsh, File)

Already, about 26 million people have applied, and 16 million applications have been approved. However, because of court rulings, none of the relief has actually gone out. The Department of Education would “quickly process their relief once we prevail in court,” White House Press Secretary Karine Jean-Pierre said.

“In this country, we are not ruled by an all-powerful executive with a pen and a phone. Instead, we are ruled by a Constitution that provides for three distinct and independent branches of government,” Pittman wrote.

The administration has appealed that ruling.

Pittman’s ruling came after the 8th U.S. Circuit Court of Appeals temporarily stopped the program while it considers whether to impose a permanent ban. That case was brought by a half-dozen Republican-led states.

Student loan forgiveness is likely to end up before the Supreme Court.

People with student loan debt have not been required to make payments during the pandemic. But payments are set to resume, and interest will begin to accrue again, in January.
Biden has said the payment pause would not be extended again, but that was before the court rulings. It was not clear whether the pause might be continued while the legal challenges to the program play out.

As for loan forgiveness, the Education Department said on its website that it would hold on to the applications for those who have already applied.