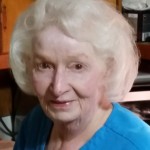 She was born on March 16, 1940, in Elbridge, TN to the late Marvin Samuel Roberson and Jessie Leona Chandler Roberson.  She was a member of the Maranatha Baptist Church.  Mrs. Janie worked as a rural Carrier for the U.S. Postal Service and at Heckathorne Manufacturing, the accounting department.  She was also preceded in death by her husband of over 55 years:  Walker Neal Bain; one son:  David Bain; two brothers:  Marvin Samuel Roberson and Nathaniel Roberson.

The Bain Family greatly appreciate the kind expressions of sympathy in our loss.  Thank you for keeping them in your prayers.