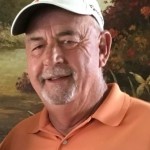 Claude was born December 3, 1957 in Clarksdale, MS, the son of Claude and Margaret. He graduated from West Memphis High School in 1975 and attended Arkansas State University.

Claude, “the cabinet guy”, as he was known by those who worked with him, designed kitchens and bathrooms in the Mid-South area for the last 40 years. He enjoyed being outside hunting, fishing, boating, and golfing. But it was the time with his family that made him the happiest.

Claude is survived by his loving wife of 41 years, Debbie as well as his sons, Greg (Katie) and Chad; his two grandchildren, Sloane and Sam; his sisters, May Wolfe, Geneva Snyder, and Dorothy Higginbotham; and his nephew, Michael Lavoie (Jodie) and their daughters, Maggie Myers (Carter) and Abby Lavoie.

In addition to his parents, he was preceded in death by his two sisters, Evelyn Medders and Rachel Lavoie.