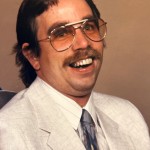 Gary was born November 3, 1957 in Somerville, the son of the late Jerry and Mary Lee Colburn Morgan. He graduated from Fayette Academy in Somerville, where he played football and led the freshman team as quarterback. When he was a freshman, he led the team to an undefeated season and won the Pumpkin Bowl. Gary was ambidextrous and could pitch baseball with both hands. He won numerous motocross races across the United States and enjoyed going to rock concerts and watching golf.