KYIV, Ukraine (AP) — Waves of Russian airstrikes rocked Ukraine on Tuesday, with authorities from east to west reporting attacks on energy and other facilities that knocked out power and, in the capital, struck residential buildings. At least 10 regions and cities reported that they were targeted. The assault followed what have been days of euphoria in Ukraine after one of its biggest military successes in the nearly nine-month Russian invasion — the retaking last week of the southern city of Kherson. Authorities there are working furiously to get Kherson back on its feet and beginning to investigate alleged Russian abuses during its occupation. The southern city is without power and water. 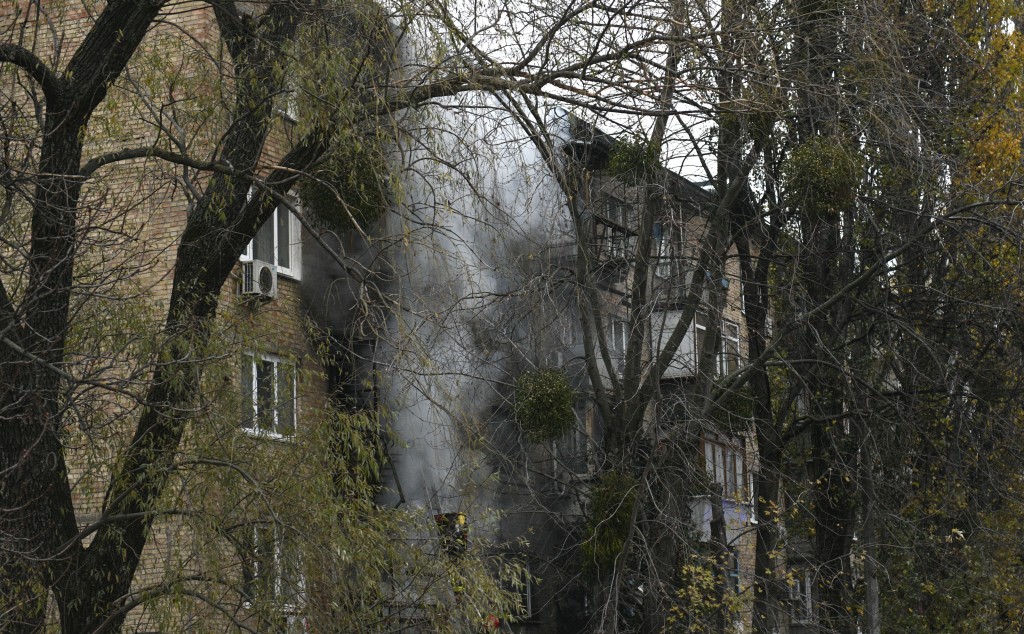 KYIV, Ukraine (AP) — Waves of Russian airstrikes rocked Ukraine on Tuesday, with authorities immediately announcing emergency blackouts after attacks from east to west on energy and other facilities knocked out power and, in the capital, struck residential buildings.

A senior Ukrainian official, Kyrylo Tymoshenko, described the situation as “critical” and urged Ukrainians to cut back on their power usage and “hang in there.” Power provider DTEK announced emergency blackouts in the capital and authorities announced similar steps elsewhere, too.

Kyiv Mayor Vitali Klitschko said authorities have found a body in one of the residential buildings struck there.

THIS IS A BREAKING NEWS UPDATE. AP’s earlier story follows below.

KYIV, Ukraine (AP) — Waves of Russian airstrikes rocked Ukraine on Tuesday, with authorities from east to west reporting attacks on energy and other facilities that knocked out power and, in the capital, struck residential buildings.

The barrage of strikes — including with missiles — came as air raid alerts were issued across Ukraine. At least 10 regions and cities reported that they were targeted. The assault followed what have been days of euphoria in Ukraine after one of its biggest military successes in the nearly nine-month Russian invasion — the retaking last week of the southern city of Kherson.

As its battlefield losses mount, Russia has in recent months increasingly resorted to targeting Ukraine’s power grid, seemingly hoping to turn the approach of winter into a weapon by leaving people in the cold and dark.

In Kyiv, video published by a presidential aide showed a five-story, apparently residential building on fire, with flames licking through apartments. The city mayor said three residential buildings were struck and that air defense units shot down other missiles. Vitali Klitschko added on his Telegram social media channel that medics and rescuers are being scrambled to the sites of the attacks.

Ukraine had seen a period of comparative calm since previous waves of drone and missile attacks several weeks ago.

The strikes came as authorities were already working furiously to get Kherson back on its feet and beginning to investigate alleged Russian abuses there and its surrounds.

The southern city is without power and water and the head of the U.N. human rights office’s monitoring mission in Ukraine, Matilda Bogner, on Tuesday decried a “dire humanitarian situation” there.

Speaking from Kyiv, Bogner said her teams are looking to travel to Kherson to try to verify allegations of nearly 80 cases of enforced disappearances and arbitrary detention it has turned up in the area and “understand whether the scale is in fact larger than what we have documented already.”

The head of the National Police of Ukraine, Igor Klymenko, said authorities are to start investigating reports from Kherson residents that Russian forces set up at least three alleged torture sites in now-liberated parts of the wider Kherson region and that “our people may have been detained and tortured there.”

“Mine clearance is currently underway. After that, I think, today, investigative actions will begin,” he said on Ukrainian TV.

The retaking of Kherson was one of Ukraine’s biggest successes in the nearly 9-month-old Russian invasion and dealt another stinging blow to the Kremlin. But large parts of eastern and southern Ukraine remain under Russian control and fighting continues.

Zelenskyy on Tuesday likened the recapture of the Kherson to the Allied landings in France on D-Day in World War II, saying both were watersheds on the road to eventual victory.

Speaking via video link to a Group of 20 summit in Indonesia, Zelenskyy said Kherson’s liberation from eight months of Russian occupation was “reminiscent of many battles in the past, which became turning points in the wars.”

“It’s like, for example, D-Day — the landing of the Allies in Normandy. It was not yet a final point in the fight against evil, but it already determined the entire further course of events. This is exactly what we are feeling now,” he said.

The liberation of Kherson — the only provincial capital that Moscow had seized — has sparked days of celebration in Ukraine and allowed families to be reunited for the first time in months. But as winter approaches, the city’s remaining 80,000 residents are without heat, water or electricity, and short on food and medicine.

Still, U.S. President Joe Biden called it a “significant victory” for Ukraine. Speaking on the sidelines of the G-20 summit, Biden added: “We’re going to continue to provide the capability for the Ukrainian people to defend themselves.”

In his address to the G-20, Zelenskyy called for the creation of a special tribunal to try Russian military and political figures for the crime of aggression against Ukraine, and the creation of an international mechanism to compensate Kyiv for wartime deaths and destruction.

Zelenskyy referred to the G-20 meeting as “the G-19 summit,” adhering to Kyiv’s line that Russia should be excluded from the grouping.

“Everywhere, when we liberate our land, we see one thing — Russia leaves behind torture chambers and mass burials. … How many mass graves are there in the territory that still remains under the control of Russia?” Zelenskyy pointedly asked.

Joanna Kozlowska in London, and Jamey Keaten in Geneva, contributed to this story.