KNOXVILLE, Tenn. (AP) — Tennessee quarterback Hendon Hooker will miss the rest of the season after injuring his left knee in the fourth quarter of the ninth-ranked Volunteers loss to South Carolina.

Tennessee announced Sunday that Hooker had a torn ACL and thanked the fifth-year senior transfer from Virginia Tech for being part of the Volunteers’ resurgence. 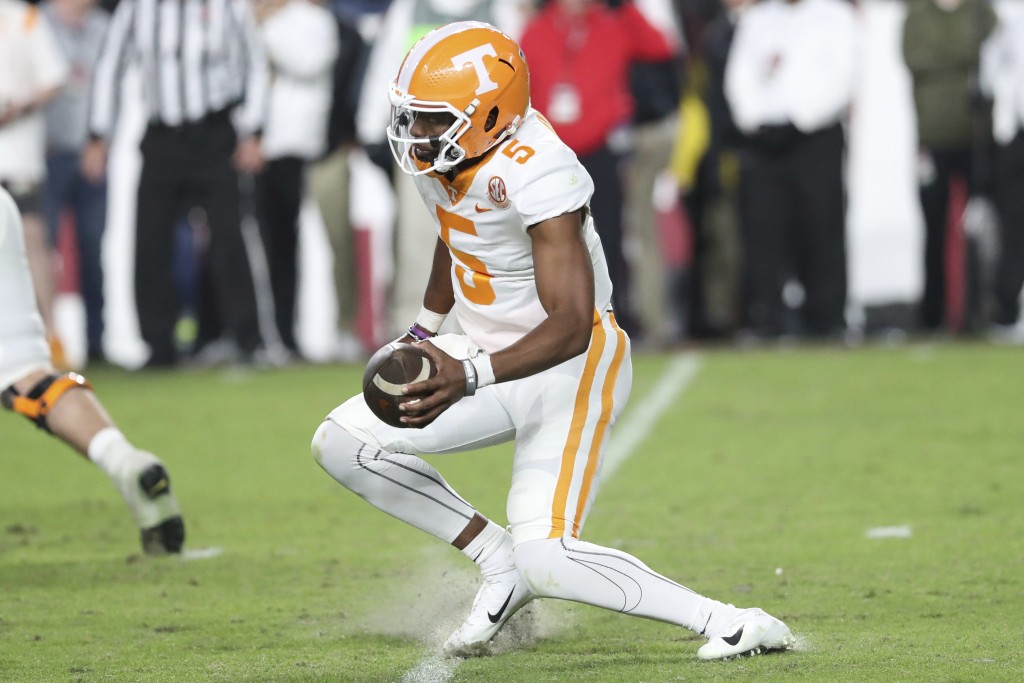 Tennessee quarterback Hendon Hooker suffers an injury while making a cut during the second half of the team’s NCAA college football game against South Carolina on Saturday, Nov. 19, 2022, in Columbia, S.C. Hooker left the game. (AP Photo/Artie Walker Jr.)

“Forever a Tennessee legend and the ultimate teammate, we know Hendon will come back stronger than ever as he embarks on a promising NFL career,” the school said.

Hooker has been one of the best quarterbacks in the country and a leading Heisman Trophy contender as the Volunteers (9-2) became a surprise entry into the College Football Playoff race.
He has thrown 27 touchdown passes and just two interceptions this season, directing the highest scoring team in the country at 46.5 points per game.

With the Vols trailing by 18 early in the fourth quarter Saturday, Hooker kept the ball on an option play and went down without being hit. He missed the rest of the game and now Tennessee will play out the season without him.

Tennessee is at Vanderbilt next Saturday. While unlikely to remain in the playoff race, the Vols could still land a New Year’s Six bowl bid with another victory.

Hooker came to Tennessee in 2021 after three seasons at Virginia Tech and didn’t win the starting job initially last season. He ended up throwing 31 touchdowns passes and helping the Vols to a 7-6 season under first-year coach Josh Heupel.

This season, Hooker and the Vols really took off. He finishes with 3,135 yards passing and another 430 yards and five touchdowns rushing.