After attending the Asia-Pacific Economic Cooperation summit in Thailand, Harris flew Sunday night to a red-carpet welcome in Manila. On Monday, she meets President Ferdinand Marcos Jr. for talks aimed at reinforcing Washington’s oldest treaty alliance in Asia and strengthening economic ties, said a senior U.S. administration official, who was not identified according to practice, in an online briefing ahead of the visit. 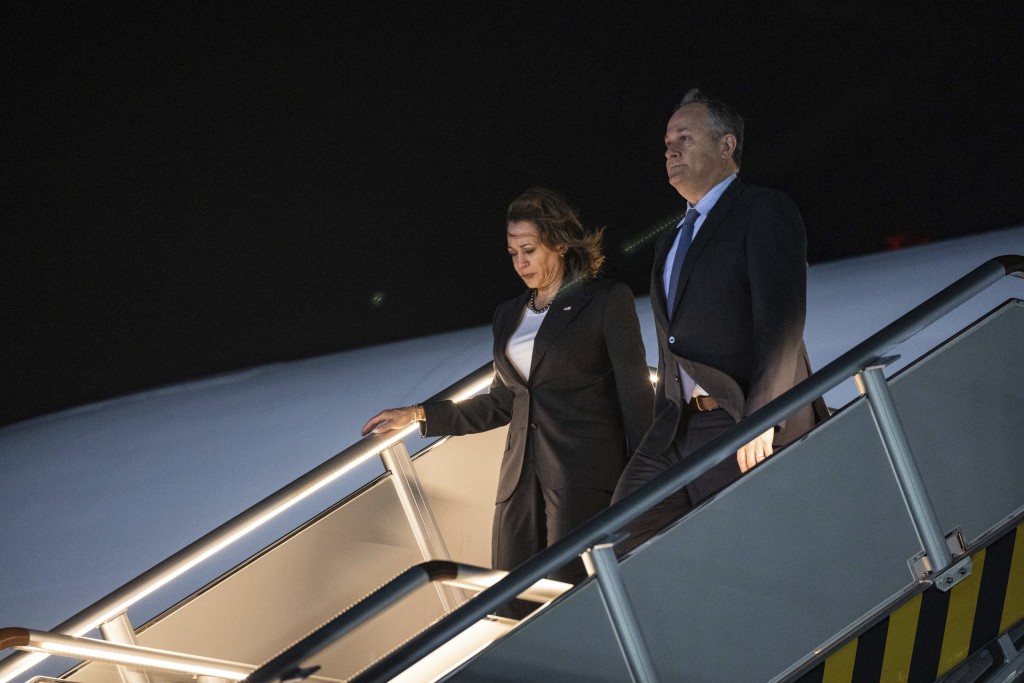 Harris said her trip to Thailand was “quite successful” as she reiterated the U.S. commitment to the region Sunday afternoon at a roundtable discussion on climate change.
The panel of climate activists, civil society members and business leaders focused on clean energy and the threat climate change is posing to the Mekong River, which more than 60 million people in Southeast Asia use for food, water and transport. Harris announced the U.S. plans to provide up to $20 million in funding for clean energy in the region via the Japan-U.S. Mekong Power Partnership.

Before her flight out, she stopped by a local market and perused a maze of shops, struck up conversations with shopkeepers and purchased Thai green curry paste.

On Tuesday she’ll fly to Palawan province, which lies along the South China Sea, to meet fishermen, villagers, officials and the coast guard. Once there, she’ll be the highest-ranking U.S. leader to visit the frontier island at the forefront of the long-seething territorial disputes involving China, the Philippines, Vietnam, Malaysia, Brunei and Taiwan.

Harris will underscore the importance of international law, unimpeded commerce and freedom of navigation in the South China Sea, the U.S. official said.
China can view the visit the way it wants, the official added in response to a question, but Washington’s message is that the U.S., as a member of the Indo-Pacific, is engaged and committed to the security of its allies in the region.

Philippine Ambassador to Washington Jose Manuel Romualdez said Harris’s trip to Palawan shows the level of America’s support to an ally and concern over China’s actions in the disputed sea.
“That’s as obvious as you can get, that the message they’re trying to impart to the Chinese is that ‘we support our allies like the Philippines on these disputed islands,'” Romualdez told The Associated Press. “This visit is a significant step in showing how serious the United States views this situation now.”

Washington and Beijing have long been on a collision course in the contested waters. While the U.S. lays no claims to the strategic waterway, where an estimated $5 trillion in global trade transits each year, it has said that freedom of navigation and overflight in the South China Sea is in America’s national interest.

China opposes U.S. Navy and Air Force patrols in the busy waterway, which Beijing claims virtually in its entirety. It has warned Washington not to meddle in what it says is a purely Asian territorial conflict — which has become a delicate front-line in the U.S.-China rivalry in the region and has long been feared as a potential flashpoint.
In July, U.S. Secretary of State Antony Blinken called on China to comply with a 2016 arbitration ruling that invalidated Beijing’s vast territorial claims in the South China Sea and warned that Washington is obligated to defend treaty ally Philippines if its forces, vessels or aircraft come under attack in the disputed waters.

China has rejected the 2016 decision by an arbitration tribunal set up in The Hague under the United Nations Convention on the Law of the Sea after the Philippine government complained in 2013 about China’s increasingly aggressive actions in the disputed waters. Beijing did not participate in the arbitration, rejected its ruling as a sham and continues to defy it.
Harris’ visit is the latest sign of the growing rapport between Washington and Manila under Marcos Jr., who took office in June after a landslide electoral victory.
America’s relations with the Philippines entered a difficult period under Marcos’ predecessor, Rodrigo Duterte, who threatened to sever ties with Washington and expel visiting American forces, and once attempted to abrogate a major defense pact with the U.S. while nurturing cozy ties with China and Russia.

When President Joe Biden met Marcos Jr. for the first time in September in New York on the sidelines of the U.N. General Assembly, he stressed the depth by which the U.S. regards its relations with the Philippines despite some headwinds.
“We’ve had some rocky times, but the fact is it’s a critical, critical relationship, from our perspective. I hope you feel the same way,” Biden said then. Marcos Jr. told him, “We are your partners. We are your allies. We are your friends.”

The rapprochement came at a crucial time when the U.S. needed to build a deterrent presence amid growing security threats in the region, Romualdez said.
Philippine military chief of staff Lt. Gen. Bartolome Bacarro said last week that the U.S. wanted to construct military facilities in five more areas in the northern Philippines under a 2014 defense cooperation pact, which allows American forces to build warehouses and temporary living quarters within Philippine military camps.

The northern Philippines is strategically located across a strait from Taiwan and could serve as a crucial outpost in case tensions worsen between China and the self-governed island.
Harris spoke briefly with Chinese leader Xi Jinping on Saturday while heading into a closed-door meeting at APEC. When asked Sunday whether they discussed Taiwan or North Korea, she reiterated they talked about “keeping open lines of communication.”

While aiming to deepen ties, the Biden administration has to contend with concerns by human rights groups over Marcos Jr. The Philippine leader has steadfastly defended the legacy of his father, a dictator who was ousted in a 1986 pro-democracy uprising amid human rights atrocities and plunder.

Given the Biden administration’s high-profile advocacy for democracy and human rights, its officials have said human rights were at the top of the agenda in each of their engagements with Marcos Jr. and his officials.