WASHINGTON (AP) — The Supreme Court said Monday it will hear a dispute over a dog toy that got whiskey maker Jack Daniel’s barking mad. 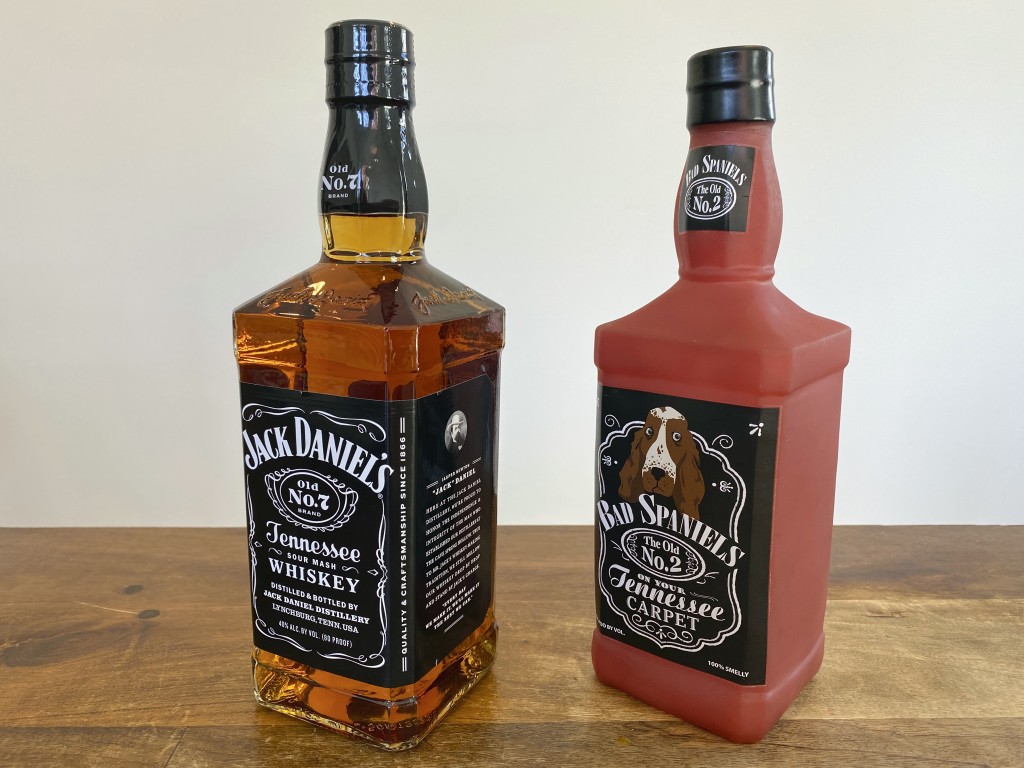 A bottle of Jack Daniel’s Tennessee Whiskey is displayed next to a Bad Spaniels dog toy in Arlington, Va., Sunday, Nov. 20, 2022. Jack Daniel’s has asked the Supreme Court justices to hear its case against the manufacturer of the toy. (AP Photo/Jessica Gresko)

Jack Daniel’s had asked the justices to hear its case against the manufacturer of the plastic Bad Spaniels toy. The toy mimics the Jack Daniel’s bottle and label but is a parody. While the original bottle has the words “Old No. 7 brand” and “Tennessee Sour Mash Whiskey,” the parody proclaims: “The Old No. 2 on Your Tennessee Carpet.” Instead of the original’s note that it is 40% alcohol by volume, the parody says it’s “43% Poo by Vol.” and “100% Smelly.”

A number of major companies from the makers of Campbell Soup to outdoor brand Patagonia and jeans maker Levi Strauss had urged the justices to take what they said was an important case for trademark law.

Lawyers for the toy’s maker, Arizona-based VIP Products, told the high court that Jack Daniel’s can’t take a joke. They said Jack Daniel’s has “waged war” against the company for “having the temerity to produce a pun-filled parody” of its bottle. The toy retails for about $13 to $20 and the packaging notes in small font: “This product is not affiliated with Jack Daniel Distillery.”

Jack Daniel’s lead attorney, Lisa Blatt, made no bones about the company’s position in her court filing.

The toy is part of a line of VIP Products called Silly Squeakers that mimic liquor, beer, wine and soda bottles. They include Mountain Drool, which parodies Mountain Dew, and Heini Sniff’n, which parodies Heineken. A court in 2008 barred the company from selling its Budweiser parody, ButtWiper.

The case won’t be argued until early 2023 with a decision expected before the court leaves for its summer recess.