MARYVILLE, Tenn. (AP) — Sew Old Antique and Vintage Sewing Machine Repair is run out of Maggie West’s home in Maryville. In West’s basement, her workspace houses a welded worktable, a collection of tools and supplies. Scents of shellac, nicotine, old homes, coal dust and other smells from century-old memories fill the work area.

“The sound of my mother’s sewing machine was in the background of my life,” West said. “She made all of our clothes when we were children, my prom dresses and my wedding dress.”
She has renewed 40 antique sewing machines since she started up cycling them during the pandemic. 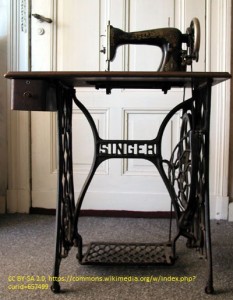 Needing a hobby to stay busy at home, she hand-embroidered small pockets for women that are worn under skirts. To help fulfill the orders she was receiving, West traded in hand-sewing for a treadle sewing machine, which is powered mechanically by the operator pushing a pedal back and forth.

West named her first treadle “Christine,” based off Stephen King’s 1983 fictional story about a murderous car.

“She spit spiders at me for months,” West said.

After her success with “Christine,” West pursued restoring sewing machines as a business. She taught herself how to repair them, and sewing groups on social media gave her feedback and advice.

“I see a lot of machines that are not being used. Nobody wants to get rid of them because it’s grandma’s, but people don’t know how to use them,” West said.

When she purchases a machine, she can learn its history.

One of her favorites, “Aunt Lula,” originated from Harlan County, Kentucky in 1918.

Harlan County is infamously known as Bloody Harlan for the violent conflict between unionized coal miners and law enforcement in the 1930s, history from University of Kentucky’s Appalachian Center states.

West said “Aunt Lula” was the only machine in the coal town, and it helped clothe young girls with material from feed sacks.

One of her machines is from 1873 and has a glass presser foot feature that allows the operator to see their work easily. This advent was not used again until plastic presser feet were invented.
West considers her sewing machines a part of history. And her restorations are her way of honoring the people who once owned them.

“I always go through the drawers and see what somebody left behind,” West said.

One of her machines had not been altered since it was used by its previous owner, and West later found a pack of unopened labels that read, “Made with love by Dorothy.”

West posted a picture of the labels on social media. A woman had asked to purchase them and said her mother, named Dorothy, recently died and left behind unfinished sewing projects.
“You know a person in a way. You see if somebody was neat and tidy or if everything is scattered,” West said. “I find obituaries and quilting patterns made out of newspapers from the 1920s.”

Some of West’s machines cost the equivalent of $3,000 today. They were built to last longer than a lifetime with minor repairs.

“It’s not disposable — it’s meant to last and be repaired,” West said. “You’re not going to throw it out in three years, you just keep fixing it.”