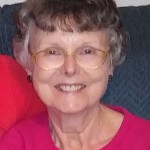 Vernalee was born February 17, 1941 in Peach Orchard, Arkansas, the daughter of the late Donald Eugene Wofford and Vada Allean Wofford. She was employed as a teacher, insurance agent and missionary in Korea. Vernalee was married December 23, 1969 to Keith Charles Steward who preceded her in death on January 9, 2019. Mrs. Steward attended Oak Grove Baptist Church in Moscow and had a tremendous love for her family and friends. She will be remembered for her love and commitment to Jesus, her Lord and Savior, and her extension of love to others.

In addition to her husband and parents, she was preceded in death by two brothers, Jesse Edward Wofford and Dwight Eugene Wofford and her infant grandson, Koen Clay.