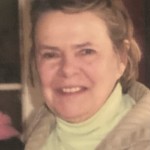 Ms. Cowan was born April 13th, 1944 and lived most of her life in La Grange, Tn. She went to Fayette County High School where she was valedictorian of her senior class and was voted “Best All Around” by her teachers. She played guard on the basketball team that went to the state tournament her senior year.

She graduated from the University of Tennessee with a B.A. in History and was a member of Chi Omega Sorority.

She began work as a librarian and worked at night to obtain a Master’s Degree in Library Science from the University of Memphis.

After 10 years as a librarian, Ms. Cowan became an independent publishers’ representative selling library books to schools, colleges and public libraries in Tennessee. She was recognized with numerous achievement awards as well as Salesman of the Year and was the only female independent representative to ever work for Macmillan/Scribner Publishers.

After 40 years in the industry she retired to pursue individual projects of her choosing. In addition to heading up the Historic LaGrange Cemetery Association, Eileen served the town of LaGrange on the Board of Aldermen and was instrumental in numerous projects that enhanced the town and surrounding areas. Projects included, but not were not limited to, establishing two arboretums and heading up the recently completed sidewalk renovation project in LaGrange.

Ms. Cowan was passionate about her flowers and gardening, feeding the birds, her cats and University of Tennessee athletics.

Eileen was a committed Christian and lived her life as a servant of her lord and savior, Jesus Christ.

In lieu of flowers, a donation to the LaGrange Cemetery Association is appreciated. Donations can be sent to: PO Box 19, LaGrange, TN 38046.