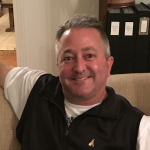 Ross Raines Workman, 53, Kansas City, MO, passed away peacefully on Sunday, November 27, 2022, at The University of Kansas Medical Center in Kansas City, KS. Funeral Services will be held at 11:00 am, Saturday, December 3 at St. Paul’s Methodist Church, 3490 Durhamville Road, Ripley, TN with Rev. Richard Dickerson officiating.  Following the service, burial will be at St. Paul’s Cemetery. Visitation for family and friends will be held one hour prior to the service beginning at 10:00 AM.  A memorial service and reception in Kansas City will be held at Emmanuel Baptist Church, 10100 Metcalf Avenue, Overland Park, KS on Saturday, December 17, 2022, at 10 AM. The family suggests memorial contributions to St. Paul’s Methodist Church, or the Benevolence Fund at Emmanuel Baptist Church in memory of Ross R. Workman.

Ross was born May 2, 1969, in Memphis, TN, the son of Richard and Mary Jane Thompson Workman. He spent his childhood living with his family in several different southern states including Texas, Mississippi and Virginia, but always considered Tennessee his home. Ross graduated from Kirby High School in Memphis in 1987. He received his undergraduate degree in Business Administration, majoring in Economics and Finance from the University of Tennessee at Martin in 1991, where he also was a member of the Division I UTM Golf Team. Ross was a scratch golfer, and he loved the game. Golf brought Ross joy throughout his life, and he considered time spent on the golf course with friends and family the happiest times of his life. He was taught the game by his father at a very young age. His grandfather would mow a mini par-3 course in his yard whenever Ross was visiting so that they could play together.

Ross married Gina Salmon on May 2, 1992, in Paris, TN. They moved to Kansas City where they raised their family and Ross created a successful career in the agricultural commodity trading industry for many years and eventually co-founded Central Plains Trading company. Together they had four children, whom Ross loved with his whole heart, celebrating and supporting each of their interests and accomplishments in sports, dance and academics.

Ross was preceded in death by his mother, Mary Jane Thompson Workman. He is survived by his wife, Gina, and their children, Mary Kate (Whit) Throckmorton, Beatrice Workman, Jack Workman, and Walter Workman. He is also survived by his father, Richard (Brenda) Workman, his three brothers, Rusty (Anne), Dan (Nanci) and Matt Workman; his Salmon family, his seven nieces and nephews, his cousins and countless wonderful friends.

All arrangements and services are under the direction of the Lea & Simmons Funeral Home, 1280 S. Dupree Ave., Brownsville, TN 38012. www.leaandsimmons.com