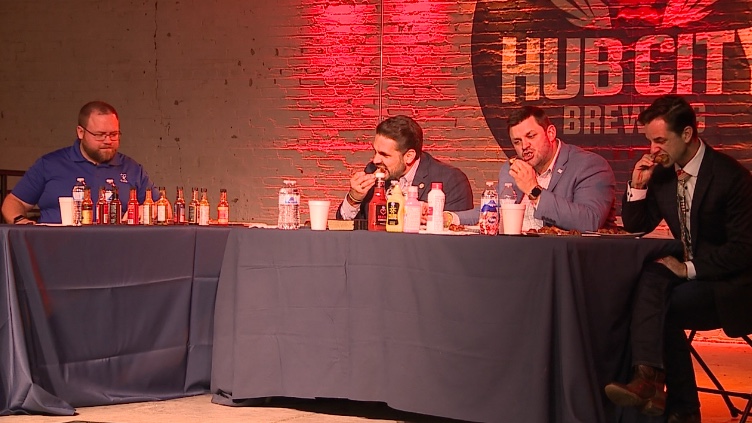 This challenge originated from a YouTube series called Hot Ones, which is hosted by Sean Evans.

In this challenge, the host and participants eat wings in elevating levels of spiciness.

There are 10 wings in total, with the first being the mildest and the last being the hottest. While eating the wings, they were asked varying questions from the host and audience. Host Kevin Adelsberger gave his predictions before the event.

“I know that Mayor Massey is the most concerned about this, and he’s been doing his own research on how to make this not so painful. I think Mayor Conger will do the best just cause I feel like he’s got that mentality. Hopefully, I’m not the one to reach for the water first. I’m going to say Jake Bynum,” Adelsberger said.

During the event, they were asked questions like if they could have a superpower what would it be, their most embarrassing story as a mayor, or a song they like that they’re afraid to admit. After the event concluded, we asked each mayor about their experience.

“Smart questions while you’re having to deal with immense, unusual pain was interesting,” Massey said.

“Although I will freely admit that at one I knew I was going to be in trouble. Like I thought, ‘Oh. That’s got a little kick to it,” Bynum said.

“Kevin and I made it through with no water, no milk. That was my secret goal going in. Don’t drink anything during the process. So I was excited to get done with that,” Conger said.

This event was the first hosted by the Jackson Chamber of Commerce for their Emerging Leaders program. This program takes young men and women from West Tennessee aged 22-35 and allows them to meet one another and develop connections.

“We want these people to have a community and to be able to have a place to come and network and visit and just talk about what’s going on in their world,” said Cameron Hansbrough, the Director of Member Relations.

Leaders with the program say they will host more fun and interesting events in the future.