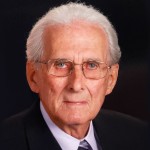 Dale Nelson Christian, age 89, resident of Oakland, Tennessee and husband of Reta Christian, departed this life and was welcomed into Heaven on Tuesday morning, November 29, 2022.

Dale was born June 9, 1933 in Ashland, Missouri, the son of the late Archie and Frances Smith Christian. He attended Ashland High School and served his country in the United States Army. Following the military, he was employed at the University of Missouri in Columbia for 25 years. Dale was Chief of the Southern Boone County Volunteer Fire Department in Ashland, Missouri for 13 years. He retired in 1998 and after retirement, moved to Memphis, Tennessee to be close to family.

Dale was married July 1, 1955 to Reta Edwards in Ashland, Missouri. They lived in Ashland and were members of Ashland Baptist Church for 50 years and were, most recently, active members of Hickory Withe Baptist Church in Eads, Tennessee. Mr. Christian was an avid NASCAR fan who enjoyed hunting and fishing. He also loved him some Memphis Grizzlies.

A visitation for Mr. Christian will be from 10 to 11 A.M. Monday, December 5, 2022 at the Peebles West Funeral Chapel at Oakland, with Funeral Services immediately following. Bro. Eddie Little, pastor of Hickory Withe Baptist Church, will be officiating. Interment will follow in the Fayette County Memorial Park Cemetery on Highway 64.