NASHVILLE, Tenn. (AP) — Tennessee Gov. Bill Lee is considering allowing express toll lanes on highways and tripling a fee for electric car owners as he targets his first big push after winning reelection — paying for tens of billions of dollars in roadway projects.

The Republican is adamant about what he won’t do: Raise the gas tax; add fully tolled roads; or issue debt in lieu of the state’s pay-as-you-go road funding method.
Lee says the timing is crucial to pivot quickly to roads. With Tennessee’s rapid growth and truck traffic, state transportation officials say $26 billion in projects are needed to address worsening congestion, and only $3.6 billion of it is planned under a big swipe at roads by Lee’s predecessor. Officials also say projects are taking so long — 15 years on average — that they are coming in 40% over budget. 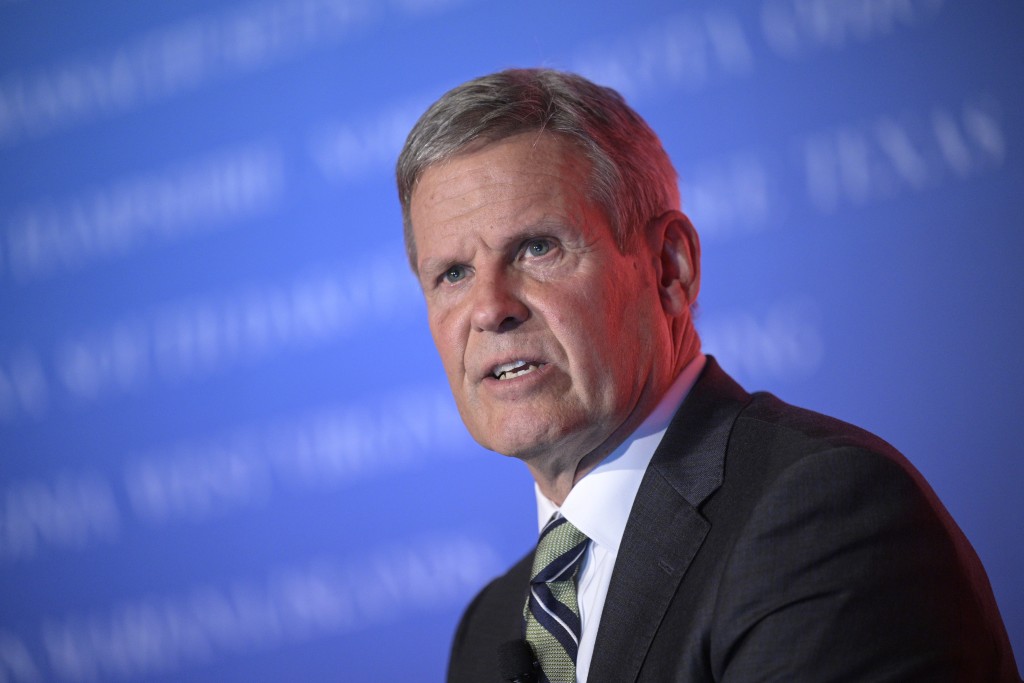 Lee will need Republican lawmakers on board for much of what he wants. That includes opening up the possibility for private companies to bid to build new express lanes on highways and impose tolls for profit. Lawmakers would also need to approve raising the annual fee on owning an electric vehicle from $100 to $300.

Transportation commissioner Butch Eley has stated that any express toll lanes would be newly built, and would not turn existing carpool lanes into paid ones. Across the country, five states have express toll lanes, 10 states have carpool lanes that let others join at a price, and some have both, according to a February 2021 report by the Federal Highway Administration.
The state could control driver eligibility and the pricing policy, which can fall or rise based on current congestion, while charging only those who want the quicker ride. A private company would design, build, finance, operate and maintain the lanes.

“There’s nothing, I think, more fair than people paying for what they use,” Eley told reporters Thursday.

The $300 electric vehicle fee could be the country’s most expensive. As of July, 31 states have a similar yearly fee, ranging from $50 in Colorado to $225 in Washington, according to the National Conference of State Legislatures. Eley says the increase better reflects what electric car drivers would be paying in federal and state gas taxes.

Lee, however, said officials may or may not settle on $300.

“We want to make sure there’s a fair fee for everyone,” Lee told reporters. “We’ll figure out what that number is and move forward.”

Vehicle taxes are a mixed bag state by state. Some have property taxes and annual inspection fees, for example. Tennessee phased out its last required vehicle testing and doesn’t charge property taxes on personal cars.

Democratic Senate Minority Leader Jeff Yarbro said he will await specifics of Lee’s strategy, hoping to hear about everything from roadwork to mass transit.
“I’m looking forward to learning more and talking to the governor because there has been a lot of focus on the highways of the state,” the Nashville lawmaker said. “But the state needs a transportation strategy, not just a highway plan.”

Lee’s sweeping roads push, which also calls for pay increases for transportation workers and other expansions to public-private partnerships, comes after former Republican Gov. Bill Haslam struck a deal during a drag-out fight over his 2017 plan. Haslam’s IMPROVE Act increased Tennessee’s gas tax from $0.20 to $0.26 per gallon over three years and upped the diesel rate as well, among other changes that in part reduced separate taxes.

Lee’s push comes after the passage of President Joe Biden’s infrastructure law. The governor’s transportation team, however, has said Tennessee’s five-year building plan was up about $1.7 billion under the law, saying that is not a major funding influx.

Rail expansion, meanwhile, is not part of Lee’s immediate plans. The concept has been hotly debated around Nashville, where a light rail ballot vote failed in 2018, toppled by tax increase opposition and concerns it could quicken gentrification that has pushed some lower-income people out of their communities. Eley said the state will keep looking at future rail possibilities.
In the GOP-led Legislature, House Speaker Cameron Sexton and Senate Speaker Randy McNally said they are on board with a deep dive into how transportation infrastructure is funded.
They’ll have plenty to hammer out when lawmakers return for their annual legislative session in January. For one, Sexton mentioned rail as a topic that needs discussion.

“We must have honest discussions on infrastructure in our state to solve the traffic congestion issue,” Sexton said. “Those must include expansion of rail access, shortening the decades-long timeline to build roads, as well as looking at express lanes on our interstates in highly congested areas.”