WASHINGTON (AP) — Performers such as Gladys Knight or the Irish band U2 usually would be headlining a concert for thousands but at Sunday’s Kennedy Center Honors the tables will be turned as they and other artists will be the ones feted for their lifetime of artistic contributions.

Actor, director, producer and human rights activist George Clooney, groundbreaking composer and conductor Tania León, and contemporary Christian singer Amy Grant will join Knight, and the entire crew of U2 in being honored by the John F. Kennedy Center for the Performing Arts. 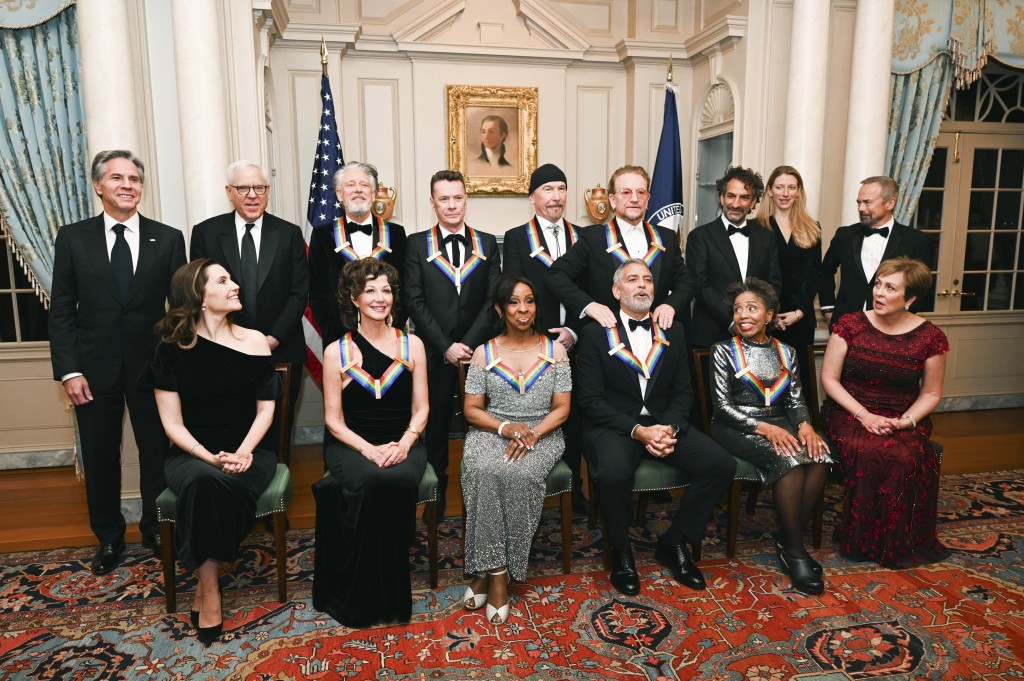 The organization honors a select group of people every year for their artistic influences on American culture. President Joe Biden, Vice President Kamala Harris and their respective spouses are slated to attend.

The 61-year-old Clooney — the actor among this year’s musically leaning group of honorees — has television credits going back into the late 1970s but became a household name with the role of Doug Ross in the television show ER.

From there he starred in movies such as “Batman & Robin,” “Three Kings,” “Ocean’s Eleven” (and Twelve and Thirteen), and his most recent movie “Ticket to Paradise.” He also has extensive directing and producing credits including “Good Night, and Good Luck.” He and his wife, humanitarian rights lawyer Amal Clooney, created the Clooney Foundation for Justice, and he’s produced telethons to raise money for various causes.

“To be mentioned in the same breath with the rest of these incredible artists is an honor. This is a genuinely exciting surprise for the whole Clooney family,” said Clooney in a statement on the Center’s website.

Knight, 78, said in a statement that she was “humbled beyond words” at receiving the Kennedy honor. The Georgia-born Knight began singing gospel music at the age of 4 and went on to a career that has spanned decades.

Knight and family members started a band that would later be known as “Gladys Knight & The Pips” and produced their first album in 1960 when Knight was just 16. Since then she’s recorded dozens of albums with such classic hits as “I Heard It Through the Grapevine” and “Midnight Train to Georgia.” Along the way she’s acted in television shows and movies. When Knight and the band were inducted into the Rock & Roll Hall of Fame Mariah Carey described Knight as “… a textbook you learn from.”

Sometimes the Kennedy Center honors not just individuals but groups; “Sesame Street” once got the nod.

This year it’s the band U2. The group’s strong connection to America goes back decades. They performed in Washington during their first trip to America in 1980. In a statement the band — made up of Bono, The Edge, Adam Clayton, and Larry Mullen Jr. — said they originally came to America with big dreams “fueled in part by the commonly held belief at home that America smiles on Ireland.”

“And it turned out to be true, yet again,” read the statement. “It has been a four-decade love affair with the country and its people, its artists, and culture.”

U2 has sold 170 million albums and been honored with 22 Grammys. The band’s epic singles include “I Still Haven’t Found What I’m Looking For,” “Pride (In the Name of Love)” and “Sunday Bloody Sunday.” Lead singer Bono has also become known for his philanthropic work to eradicate poverty and to raise awareness about AIDS.

Christian music performed Amy Grant said in an interview with The Associated Press that she’d never even been to the Kennedy Center Honors even though her husband, country musician Vince Gill, has performed during previous ceremonies. Grammy winner Grant is well known for crossover pop hits like “Baby, Baby,” “Every Heartbeat” and “That’s What Love is For.” She’s sold more than 30 million albums, including her 1991 record “Heart in Motion,” that introduced her to a larger pop audience.

Composer and conductor Tania Leon said during an interview when the honorees were announced that she wasn’t expecting “anything spectacular” when the Kennedy Center initially reached out to her. After all, she’s worked with the Kennedy Center numerous times over the years going back to 1980 when she was commissioned to compose music for a play.

But the 79-year-old Pulitzer prize winner said she was stunned to learn that this time the ceremony was going to be for her.
Leon left Cuba as a refugee in 1967 and eventually settled in New York City. She’s a founding member of the Dance Theatre of Harlem and instituted the Brooklyn Philharmonic Community Concert Series.

FDA declines to regulate CBD; calls on Congress for fix

Baby girl found abandoned in Florida an hour after birth