PHILADELPHIA (AP) — Jalen Hurts strengthened his MVP bid by throwing for 380 yards and three touchdowns and running for another score, and A.J Brown caught two touchdown passes against his former team to lead the Philadelphia Eagles to a 35-10 win over the Tennessee Titans on Sunday.

Hurts has led the Eagles to an 11-1 start, their first time with that record since 2004 and the fourth time in franchise history. The 1949 Eagles won the NFL championship. The 1980 and 2004 teams lost in the Super Bowl. 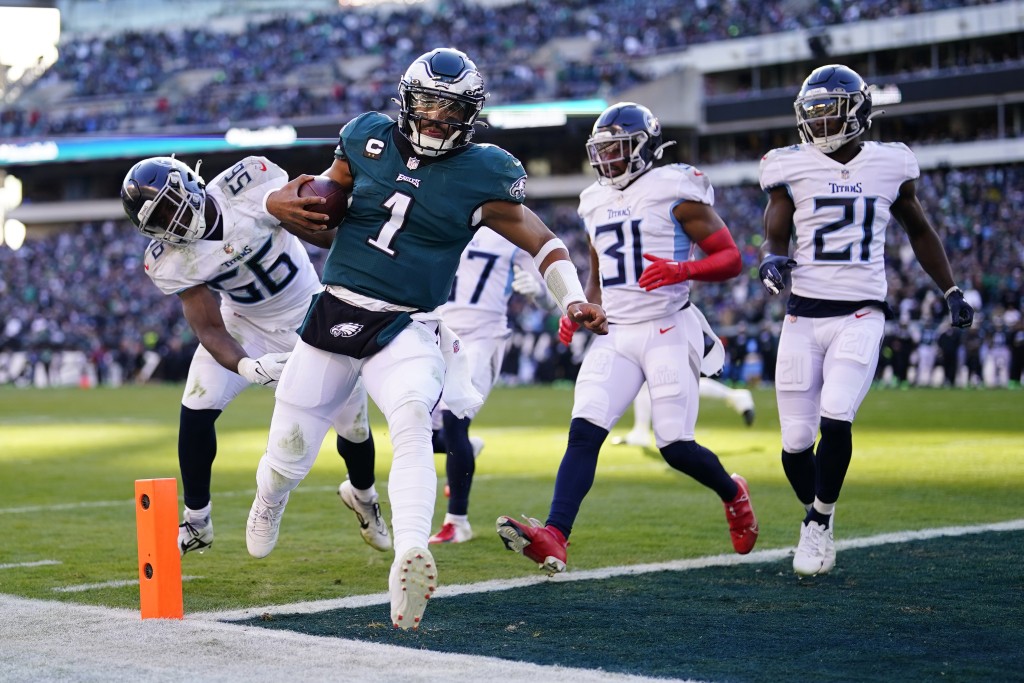 Philadelphia Eagles’ Jalen Hurts scores a touchdown during the first half of an NFL football game against the Tennessee Titans, Sunday, Dec. 4, 2022, in Philadelphia. (AP Photo/Matt Rourke)

The Eagles look every bit like a team that can win the Super Bowl.

Hurts was all they really needed to inch closer to a playoff spot.

The speedy, sure-armed QB set a career high with 29 total touchdowns and had his third career game with four total TDs. His first half alone was a pretty good game for most quarterbacks: 268 yards passing and two touchdowns with one rushing score.

The Eagles’ defense was first-rate, too, bottling up Derrick Henry — who had 11 carries for 30 yards — and limiting Ryan Tannehill to 141 yards passing and a touchdown. The Titans (7-5) lost their second straight but still have a comfortable lead in the AFC South.

After a field goal got Tennessee within 14-10 late in the second quarter, the Titans punted on five straight possessions before turning it over on downs.

It was inevitable that Hurts would look for Brown. Tennessee drafted Brown in the second round of the 2019 draft and he instantly became one of the top receivers in the game. He topped 1,000 yards receiving each of his first two seasons and had 869 in just 13 games in his third. But the Titans balked when Brown wanted a raise that would make him among the highest-paid receivers in the league and sent him to Philadelphia in a draft-night deal.

That trade was Philly’s first real win of the season.

Brown has been better than advertised — and yes, the Eagles paid him a guaranteed $57 million — and he had eight catches for 119 yards against the Titans. Fellow wideout DeVonta Smith had five catches for 102 yards.

With the game tied 7-all, Hurts and Brown connected on an apparent 40-yard TD pass that overturned because of a penalty. Brown had already hugged the goal post as part of his scoring celebration. No worries. Hurts came right back and hit Brown — who bowled over cornerback Kristian Fulton — for, yup, a 40-yard touchdown and a 14-7 lead.

Hurts threw a 34-yard TD pass to Smith on the game’s first drive and closed the first half with a 2-yard run for a 21-10 lead.

The next Hurts-to-Brown TD was a doozy. Hurts aired it out to the corner of the end zone and the ball skimmed cornerback Tre Avery’s facemask before Brown cradled it for the 29-yard score and a 28-10 lead in the third.

Miles Sanders’ 3-yard TD run in the fourth made it 35-10 and the only suspense left was if Hurts would return for another drive. He didn’t. The game was out of reach. The best season in team history remains very much in sight.

The lone Titans touchdown came with at significant cost. Receiver Treylon Burks was evaluated for a concussion following a vicious helmet-to-helmet hit as he jumped to make the 25-yard TD catch from Tannehill in the first quarter that tied the game 7-all.

Eagles safety Marcus Epps was flagged for unnecessary roughness. Burks was on his back and players from both teams took a knee. The 22-year-old receiver eventually walked off on his own power and went to the locker room for treatment.

The Eagles were penalized nine times for 60 yards in the first half and the Titans were hit with four penalties for 59 yards.

The Eagles play the first of three straight road games Sunday at the New York Giants. They follow by visiting Chicago and Dallas.