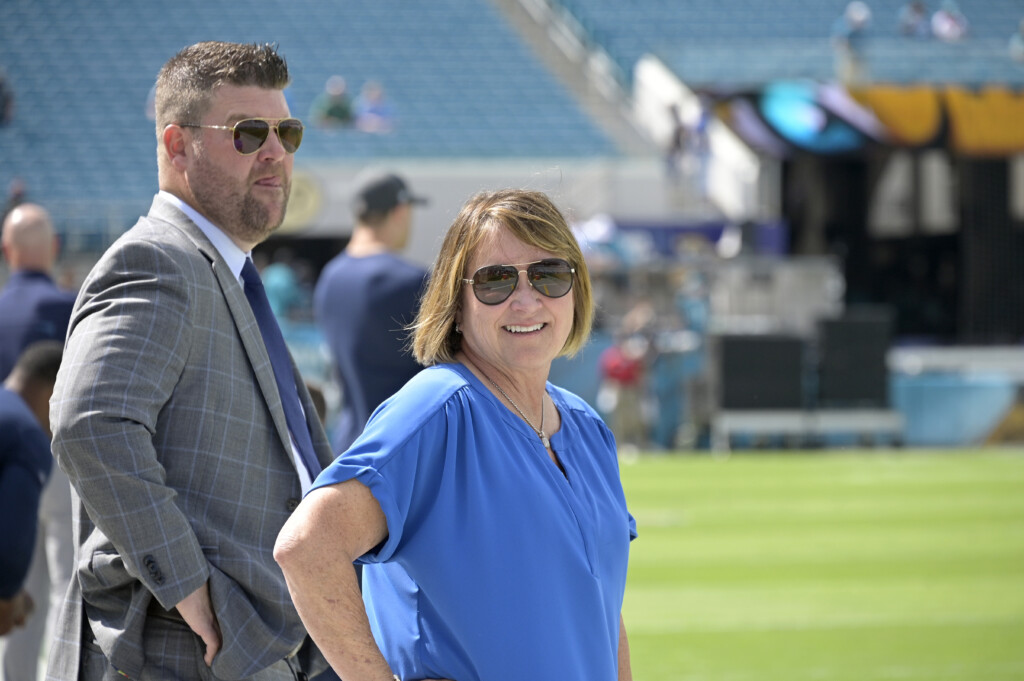 Combined with the millions she’s investing, she also isn’t afraid of making big moves chasing the Lombardi Trophy that eluded her late father.

Strunk fired general manager Jon Robinson on Tuesday in the midst of his seventh season with the Titans off to a 7-5 start and Tennessee second only to the Kansas City Chiefs for the NFL’s longest active streak of consecutive winning seasons in his tenure.

The Titans announced Strunk’s decision in a statement. Ryan Cowden, the vice president of player personnel, will handle player personnel for the rest of this season. The Titans plan to start searching for a new general manager soon with a full search at the end of the season.

Strunk said her goal since replacing her brother-in-law as controlling owner in March 2015 has been to raise the standard for every part of the NFL franchise founded by her late father, Bud.

Strunk said she believes the Titans have made “significant progress” on and off the field.

“This progress includes the core of our business, the football team itself, which is regularly evaluated both by results (wins and losses) and team construction/roster building,” Strunk said. “I am proud of what we have accomplished in my eight seasons of ownership, but I believe there is more to be done and higher aspirations to be met.”

Strunk paid to renovate the Titans’ headquarters, essentially doubling the size of the facility to both update the building and hold all the new employees hired.

The Titans also are finalizing the last piece of financing for a new enclosed stadium they want to open for the 2026 season. Strunk and the rest of ownership, with some help from the NFL and the sale of personal seat licenses, are expected to contribute $840 million toward the stadium estimated to cost $2.1 billion.

Strunk fired coach Ken Whisenhunt after a 1-6 start to his second season in November 2015 and a 3-20 record overall. She fired general manager Ruston Webster at the end of that season.

She hired Robinson, a native of Union City in West Tennessee who grew up cheering for the Titans, in January 2016 after the franchise went a combined 5-27 in 2014 and 2015.

When coach Mike Mularkey balked at making changes, Strunk fired him in January 2018 after a loss in the divisional round of the playoffs and quickly hired Mike Vrabel as his replacement.

The Titans never went worse than 9-7 in Robinson’s tenure. That includes earning the AFC’s No. 1 seed in 2021 with a 12-5 record despite setting an NFL record by using 91 players in a non-strike season. That earned coach Vrabel, whom Robinson helped hire in January 2018, the AP NFL Coach of the Year award.

Both Robinson and Vrabel had their contracts extended in February.

The Titans currently sit atop the AFC South with a chance to win the division for a third straight year, something that this franchise hasn’t done since its beginning in the original AFL.

Of their final five games, only one is against a team with a winning record. The Titans host the Jaguars (4-8) on Sunday.

But they just were routed 35-10 in Philadelphia, a loss that featured a big performance by the wide receiver Robinson traded to the Eagles during the first round of the NFL draft. A.J. Brown wanted a new contract and got it from Philadelphia in the deal Tennessee used to draft rookie Treylon Burks at No. 18.

Vrabel said on a national show before the draft that Brown wouldn’t be traded as long as he was the head coach.

Brown had eight catches for 119 yards and two touchdowns against the Titans. He has 61 catches and ranks seventh in the NFL with 950 yards along with nine touchdowns for the season. Burks leads the Titans with 369 yards receiving despite spending four games on injured reserve, while veteran Robert Woods has a team-high 33 catches.

Running back Dontrell Hilliard leads Tennessee with four TD receptions on an offense tied for 29th in total yards, 30th in averaging 171.4 yards passing per game and 26th with 18.3 points scored per game.

The Titans allowed a season-high six sacks in that loss behind an offensive line that featured three new starters due to a combination of salary cap moves during the offseason and a season-ending injury to left tackle Taylor Lewan.

In his first draft, Robinson selected two-time NFL rushing champ Derrick Henry, the eighth man in league history to run for at least 2,000 yards in a season in 2020, and a two-time All-Pro in safety Kevin Byard. His gamble taking defensive tackle Jeffery Simmons in the first round of the 2019 draft paid off with the lineman becoming a starter as a rookie.

Robinson also had several draft and other trade mistakes costing the Titans now.

He drafted offensive lineman Isaiah Wilson out of Georgia in 2020 at No. 29 overall, a player who only took four snaps in garbage time before the Titans suspended the rookie in December of that season. The Titans traded Wilson away after the season ended.

Robinson also selected cornerback Caleb Farley at No. 22 in 2021 despite questions over a second back surgery the month before the draft. Farley, who opted out of the 2020 college football season, has started two of 12 games played with both of his first two seasons ending with him on injured reserve.

Another draft pick that has turned out to be more of a bust is offensive lineman Dillon Radunz, the 53rd pick overall in 2021. Radunz came out of North Dakota State, a Football Championship Subdivision power, but he played only one game in 2020 because of the pandemic.

Radunz lost the right tackle job to rookie Nicholas Petit-Frere this season. His five career starts all have come because of injuries.

Robinson traded for seven-time Pro Bowl receiver Julio Jones in June 2021, reworking quarterback Ryan Tannehill’s contract to create cap space. The Titans cut Jones in March, and Robinson traded for Woods as a replacement with the veteran coming off a torn ACL in his left knee last November.