Rioter who assaulted cops at Capitol gets 5 years in prison

WASHINGTON (AP) — A Tennessee man who authorities say came to Washington ahead of the Jan. 6, 2021, riot prepared for violence in a car full of weapons and assaulted officers who were trying to defend the Capitol was sentenced Friday to more than five years behind bars.

Ronald Sandlin, 35, of Millington, Tennessee, pleaded guilty in September to conspiracy to obstruct an official proceeding and assaulting, resisting, or impeding officers.
Two other men were separately each sentenced Friday to four years in prison Friday for their actions connected to the riot. 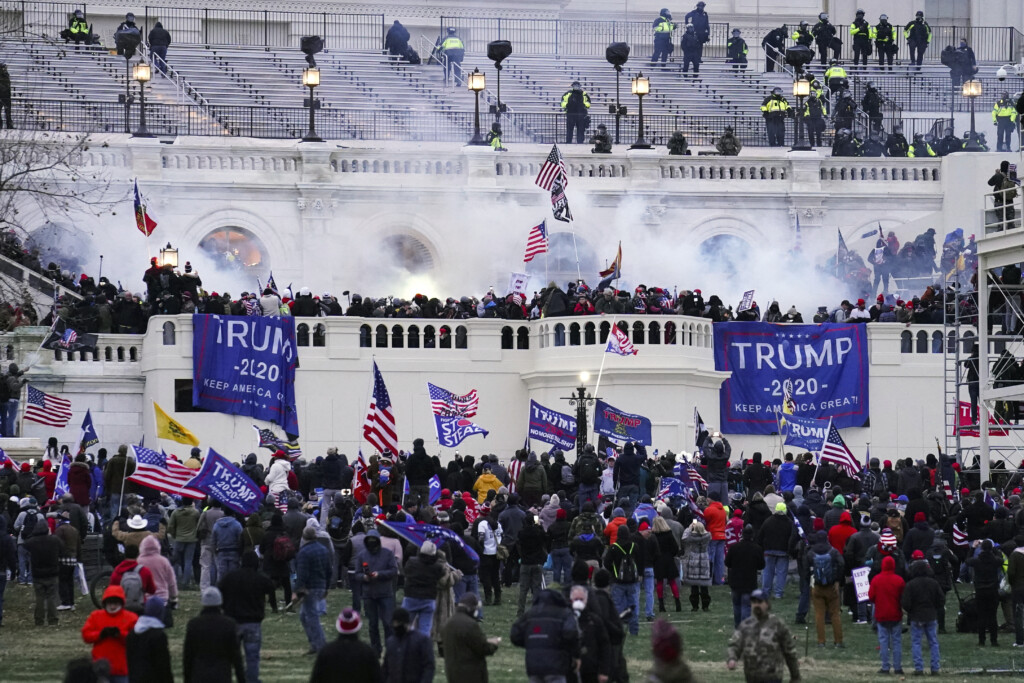 FILE – Violent insurrectionists, loyal to President Donald Trump, storm the Capitol in Washington on Jan. 6, 2021. Ronald Sandlin, a Tennessee man who authorities say came to Washington ahead of the Jan. 6, 2021, riot ready for violence in a car full of weapons and assaulted officers who were trying to defend the Capitol, has been sentenced to more than five years behind bars. (AP Photo/John Minchillo, File)

Sandlin, who authorities say adhered to the QAnon conspiracy theory, and two other men traveled from Tennessee to the Washington area in a rental car packed with two pistols, two magazines of ammunition, cans of bear mace, gas masks, body armor, several knives and other gear, according to prosecutors.

Two days before the insurrection, Sandlin posted on social media a picture of another man lying on bed holding a gun and wrote: “My fellow patriot … sleeping ready for the boogaloo Jan 6,” according to court papers. Authorities say “boogaloo” referred to to civil war.

On Jan. 6, prosecutors say Sandlin led the mob’s charge against officers at two points at the Capitol, shoved officers and tried to rip the helmet off of one of them. He shouted at officers: “Your life is not worth it.. you’re going to die, get out of the way,” according to court papers.

Inside the building, Sandlin smoked a marijuana joint in the Rotunda of the Capitol and stole a book from an office, prosecutors say.

Sandlin’s lawyer wrote in court papers that his client “allowed himself to believe in lies and disinformation.” In a letter to the judge, Sandlin apologized to the officers he assaulted and the lawmakers at the Capitol.

“I believe January 6, 2021 was a national tragedy for everyone involved and I hope my judgement will help the healing process moving forward,” he wrote.

Separately on Friday, Nicholas Ochs, 36, the founder of the Hawaii Proud Boys chapter, and Nicholas DeCarlo, 32, a Fort Worth, Texas man who was with Ochs on Jan. 6, were each sentenced to four years in prison for their roles in the riot.

Ochs, a onetime Republican candidate for the Hawaii House of Representatives, and DeCarlo both pleaded guilty in September to obstructing Congress’ certification of the vote.

Ochs and DeCarlo were captured in a widely shared photo giving a thumbs up sign in front of a Capitol door that had been defaced with the words “Murder the Media,” — the name of the social media channel they shared. Authorities say DeCarlo scrawled the words on the door.

They attended the “Stop the Steal” rally near the White House on the morning of Jan. 6 and then marched together to the Capitol.

Video shows them throwing smoke grenades toward a line of police trying to keep the mob from the stage set up for Biden’s inauguration, authorities say. DeCarlo also rummaged through a Capitol police officer’s bag and stole a pair of plastic handcuffs, prosecutors said.

Ochs posted on Twitter a picture of the men smoking cigarettes inside the Capitol, and the caption said: “Hello from the Capital lol,” according to court papers.

Ochs’ attorney, Ed MacMahon, said in court papers that his client, who served in the Marines, “regrets and is deeply embarrassed by his juvenile behavior exhibited at the Capitol.” After the hearing, MacMahon called the punishment a “long prison sentence for somebody that didn’t commit a single act of violence.”

DeCarlo’s lawyer wrote that his client has expressed remorse and “in order to help make amends” voluntarily conducted a lengthy interview with the House committee investigating the attack.
Ochs and DeCarlo are among dozens of members and associates of the Proud Boys who have been charged in the Capitol riot.

The group’s former national chairman, Enrique Tarrio, and other leaders are set to stand trial this month on seditious conspiracy and other serious charges for what authorities allege was a plot to stop the transfer of presidential power from Republican Donald Trump to Democrat Joe Biden.

More than 900 people have been charged in the riot with offenses ranging from misdemeanors for illegally entering the Capitol to seditious conspiracy.

The longest sentence so far has been 10 years in prison for a former New York City police officer who used a metal flagpole to assault an officer at the Capitol.

Last month, Oath Keepers founder Stewart Rhodes and the leader of the group’s Florida chapter Kelly Meggs were convicted of seditious conspiracy for their roles in the riot. They are awaiting sentencing.