Confederate monument set to be removed from Virginia capital

RICHMOND, Va, (AP) — Work to relocate Richmond’s final city-owned Confederate monument should start this week after a judge refused a request to delay the removal of the statue of Gen. A.P. Hill from its prominent spot in Virginia’s capital, an official said.

Richmond Circuit Court Judge David Eugene Cheek Sr. last week rejected a motion from four indirect descendants of Hill, who was killed in the final days of the Civil War, to stop the city’s removal plans. 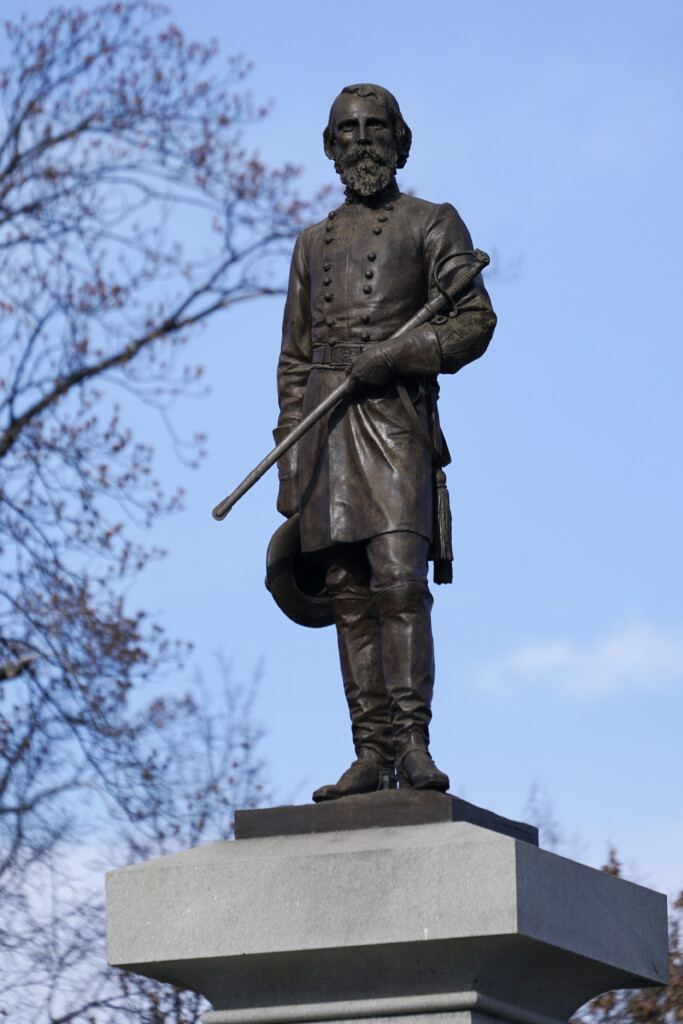 FILE – The monument of confederate General A.P. Hill, which contains his remains, is in the middle of a traffic circle on Arthur Ashe Blvd. Thursday Jan. 6, 2022, in Richmond, Va. Work to relocate Richmond’s final city-owned Confederate monument should start this week after a judge refused a request to delay the removal of the statue of Gen. A.P. Hill from its prominent spot in Virginia’s capital, an official said. (AP Photo/Steve Helber, File)

Though the process of removing the monument from a busy intersection should start Monday, it’s unclear if it would be removed entirely by the end of the week, city deputy chief administrative officer Robert Steidel told WRIC-TV.

The city, a onetime capital of the Confederacy, began removing its many other Confederate monuments more than two years ago amid the racial justice protests that followed George Floyd’s murder. Among the notable monuments removed was an imposing statue of Gen. Stonewall Jackson, which was taken down from a concrete pedestal in 2020 along Richmond, Virginia’s famed Monument Avenue.

Richmond officials decided to convey the monuments to the Black History Museum and Cultural Center of Virginia. But efforts to remove the Hill statue have been complicated because the general’s remains were buried beneath the monument in 1891.

The indirect descendants and the city have agreed that Richmond’s plan to move Hill’s remains to a cemetery in Culpeper should be allowed to move forward. But these descendants contend they have control over the statue and want it relocated to Cedar Mountain Battlefield, near the cemetery, instead of to the museum. Cheek ruled against them in October.

In the most recent hearing, Cheek denied their motion to stay the removal of the Hill monument while the descendants press an appeal with the Virginia Court of Appeals.

The city has spent at least $1.8 million removing other city-owned monuments, the Richmond Times-Dispatch reported. Cheek determined that delaying the removal would result in additional cost and retain a potential traffic hazard.

The monument will be kept in storage while the case goes through the expected appeal process, Steidel said in court last week.

Many Confederate statues in Virginia were erected decades after the Civil War, during the Jim Crow era, when states imposed new segregation laws, and during the “Lost Cause” movement, when historians and others tried to depict the South’s rebellion as a fight to defend states’ rights, not slavery.

Those seeking removal of the statues, particularly in Richmond — the onetime capital of the Confederacy — said that would service notice that the city is no longer a place with symbols of oppression and white supremacy.