CAPE CANAVERAL, Fla. (AP) — NASA’s Orion capsule made a blisteringly fast return from the moon Sunday, parachuting into the Pacific off Mexico to conclude a test flight that should clear the way for astronauts on the next lunar flyby.

The incoming capsule hit the atmosphere at Mach 32, or 32 times the speed of sound, and endured reentry temperatures of 5,000 degrees Fahrenheit (2,760 degrees Celsius) before splashing down west of Mexico’s Baja California near Guadalupe Island. A Navy ship quickly moved in to recover the spacecraft and its silent occupants — three test dummies rigged with vibration sensors and radiation monitors. 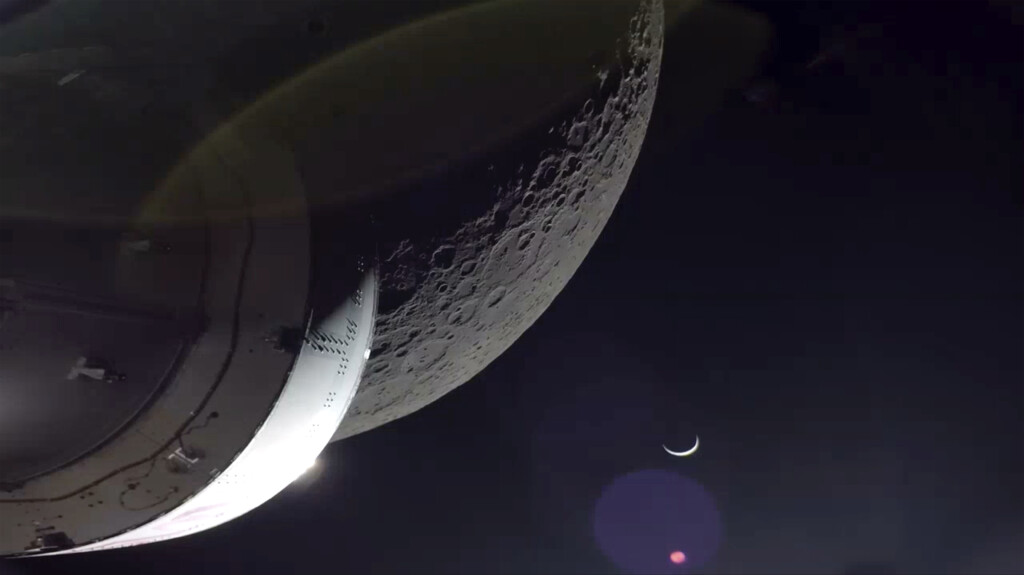 NASA’s Orion spacecraft beamed back close-up photos of the moon and Earth on Monday, Dec. 5, 2022. The crew capsule and its test dummies will aim for a Pacific Ocean splashdown on Sunday, Dec. 11, 2022, off the coast of San Diego after a three-week test flight, setting the stage for astronauts on the next flight in a couple years. (NASA via AP)

NASA needed a successful splashdown to stay on track for the next Orion flight around the moon, currently targeted for 2024. Four astronauts will make the trip. That will be followed by a two-person lunar landing as early as 2025.

Astronauts last landed on the moon 50 years ago Sunday. After touching down on Dec. 11, 1972, Apollo 17’s Eugene Cernan and Harrison Schmitt spent three days exploring the lunar surface, the longest stay of the Apollo era. They were the last of the 12 moonwalkers.

Orion was the first capsule to visit the moon since then, launching on NASA’s new mega moon rocket from Kennedy Space Center on Nov. 16. It was the first flight of NASA’s new Artemis moon program, named after Apollo’s mythological twin sister.

And while no one was on the $4 billion test flight, NASA managers were thrilled to pull off the dress rehearsal, especially after so many years of flight delays and busted budgets. Fuel leaks and hurricanes conspired for additional postponements in late summer and fall.

Putting people on the next flight will “ratchet up the excitement,” said Nujoud Merancy, chief of NASA’s exploration mission office in Houston.

“No one’s been to the moon in my lifetime, right?” she said. “So this is the exploration that so many of us have been dreaming about.”

In an Apollo throwback, NASA held a splashdown party at Houston’s Johnson Space Center on Sunday, with employees and their families gathering to watch the broadcast of Orion’s homecoming. Next door, the visitor center threw a bash for the public.

Getting Orion back intact after the 25-day flight was NASA’s top objective. With a return speed of 25,000 mph (40,000 kph) — considerably faster than coming in from low-Earth orbit — the capsule used a new, advanced heat shield never tested before in spaceflight. To reduce the gravity or G loads, it dipped into the atmosphere and briefly skipped out, also helping to pinpoint the splashdown area.

The splashdown occurred more than 300 miles (482 kilometers) south of the original target zone. Forecasts calling for choppy seas and high wind off the Southern California coast prompted NASA to switch the location.

Orion logged 1.4 million miles (2.25 million kilometers) as it zoomed to the moon and then entered a wide, swooping orbit for nearly a week before heading home.

Orion beamed back stunning photos of not only the gray, pitted moon, but also the home planet. As a parting shot, the capsule revealed a crescent Earth — Earthrise — that left the mission team speechless.

“The room was just absolutely silent as we absorbed the Earthrise moment,” mission manager Mike Sarafin recalled last week. Just 4 months old when Apollo 17 closed out the first moon era, he considered this “my Earthrise, too, as part of the Artemis generation.”

The moon has never been hotter. Just hours earlier Sunday, a spacecraft rocketed toward the moon from Cape Canaveral. The lunar lander belongs to ispace, a Tokyo company intent on developing an economy up there. Two U.S. companies, meanwhile, have lunar landers launching early next year.