WASHINGTON (AP) — A new Pentagon office set up to track reports of unidentified flying objects has received “several hundreds” of new reports, but no evidence so far of alien life, the agency’s leadership told reporters Friday.

The All-domain Anomaly Resolution Office (AARO) was set up in July and is responsible for not only tracking unidentified objects in the sky, but also underwater or in space — or potentially an object that has the ability to move from one domain to the next. 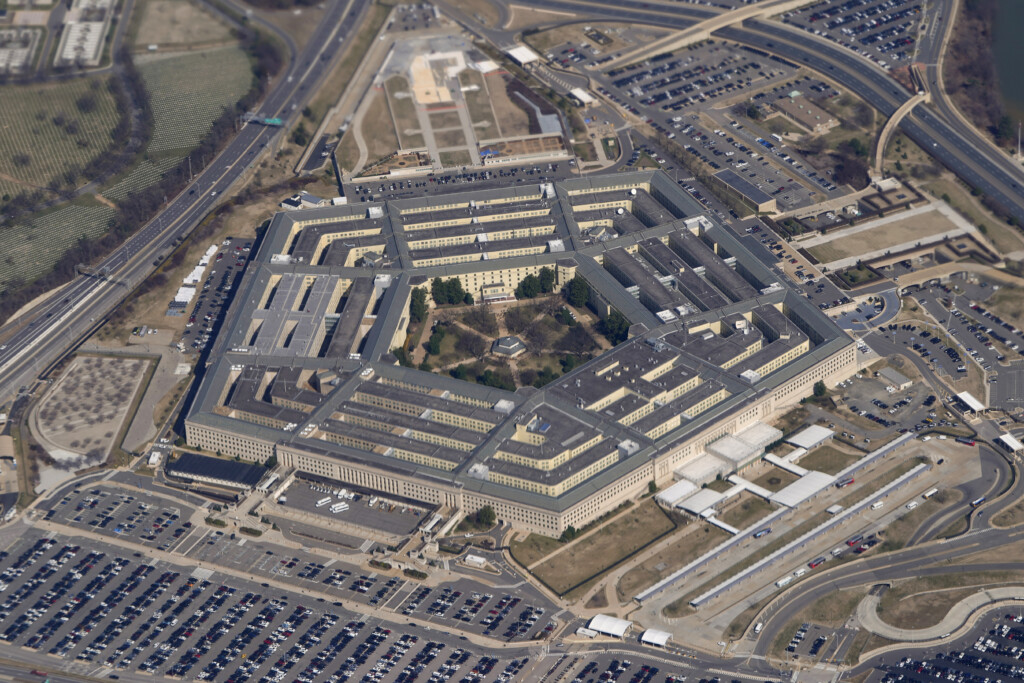 FILE – The Pentagon is seen from Air Force One as it flies over Washington, March 2, 2022. A new Pentagon office set up to track reports of unidentified flying objects has received “several hundreds” of new reports, but no evidence so far of alien life. That’s according to the leadership of the All-domain Anomaly Resolution Office. (AP Photo/Patrick Semansky, File)

The office was established following more than a year of attention on unidentified flying objects that military pilots have observed but have sometimes been reluctant to report due to fear of stigma.

In June 2021 the Office of the Director of National Intelligence reported that between 2004 and 2021, there were 144 such encounters, 80 of which were captured on multiple sensors.
Since then, “we’ve had lots more reporting,” said anomaly office director Sean Kirkpatrick. When asked to quantify the amount, Kirkpatrick said “several hundreds.”

An updated report from the Director of National Intelligence that will provide specific figures on new reports received since 2021 is expected by the end of the year, the officials said.
The office was set up not only to examine the question of whether there’s extraterrestrial life, but also because of the security risk posed by so many encounters with unknown flying objects by military installations or military aircraft.

This May, Congress held its first hearing in more than half a century on the topic, with multiple members expressing concern that whether or not the objects are alien or potentially new, unknown technology being flown by China, Russia or another potential adversary, the unknown creates a security risk.

So far, “we have not seen anything, and we’re still very early on, that would lead us to believe that any of the objects that we have seen are of alien origin,” said Ronald Moultrie, under secretary of defense for intelligence and security. “Any unauthorized system in our airspace we deem as a threat to safety.”

The office is also working on ways to improve its ability to identify unknown objects, such as by recalibrating sensors that may be focused just on known adversary aircraft or drone signatures, Moultrie said.

One reason for the hundreds of additional reports coming in may be the outreach the department has done to destigmatize reporting potential encounters. Each service has also established its own reporting processes, Kirkpatrick said.

Beyond unidentifiable objects, there’s a lot of new technology — such as future stealth bombers and stealth fighters, drones and hypersonic missiles being fielded by both the U.S. and China — that could be mistaken for a UFO. Kirkpatrick said the new office has been coordinating with the Pentagon and the U.S. intelligence community to get the signatures of U.S. technology in order to rule out those aircraft or drones.

“We are setting up very clear mechanisms with our blue programs, both our DOD and IC programs, to deconflict any observations that come in with blue activities, and ensure that we weed those out and identify those fairly early on,” Kirkpatrick said, referring to the “blue” U.S. aircraft programs in operation by the Pentagon or intelligence agencies.

For more news stories from across the U.S., click here.