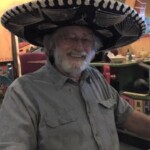 Luke was born September 13, 1941 in Bryan, Texas, the son of the late Luke Ervin Hatley, Sr. and Mary Pauline Stewart Hatley. He was employed as a journeyman meat cutter for many years and was a Master Mason and a member of the Berclair Lodge 771 since 1988. Mr. Hattley will be remembered for being a talented leather craftsman for nearly 60 years and his passion of motorcycles. He had a great love for music and a deep passion for American Old West and History. Luke enjoyed participating in pre-1860 era reenactments.

Mr. Hattley is survived by his wife of 60 years, Sherry Hattley; his son, Mark Hattley and his wife, Jennifer; two grandchildren, Ashley Creecy (John Gotera) and Jordan Badgett (Dustin); and five great-grandchildren. In addition to his parents, he was preceded in death by his brother, Bobby Hatley.

A gathering of family and friends of Mr. Hattley will be from 11 A.M. to 1 P.M. Wednesday, December 28, 2022 at the Peebles West Funeral Chapel at Oakland.