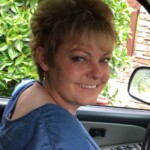 Stacey was born August 3, 1972 in Memphis, Tennessee, the daughter of Arther Ray Glover and Linda Ann Johnson Glover. She graduated from Fayette Academy in Somerville, Tennessee. She was in the Top 10 of her class and graduated with honors. Stacey loved working outside, especially cutting her yard. She followed her daddy doing carpentry and loved making candles. She had an extreme love for animals.

She was preceded in death by her stepdaughter, Kasie King and her father-in-law, Morris King.