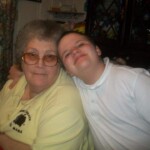 She was born December 26, 1942 in Ridgely, Tennessee, the daughter of the late Chock and Ada Bell (Curtis) Campbell, the fourth sibling of seven. She was married to the late Raymond Rogers Conner, lifetime resident of Somerville.

Big Momma was lovingly known by many and will always be remembered for the great love she had for helping others, especially children, as she was a foster parent to many children in need in Fayette and surrounding counties in her retirement years. She also was a beloved babysitter to many, many more. She considered them all her children and no matter when, her door was always open to them, even as they grew into adults who still lovingly came to visit, some with children of their own, to meet and love the one known as “Big Momma”.

She also served twelve plus years in the nursing field as a CNA in both Somerville and Brownsville, Tennessee. She was dedicated to providing care, and love to any and everyone who she met and had contact with. She loved her patients as if they were her own parents and provided a lot of time and attention even outside of her required duties as an employee.

She was a member of the Faith Church of God in Somerville and loved her Lord and Savior with all her heart. She fellowshipped with her church family as long as her health would allow her to, and often spoke of how she missed doing so once she could no longer attend the services in person. At the rehab center in Henderson, she would attend the services of Sanford Hill Baptist Church, as well as other visiting churches from the community.

A fun fact about Big Momma that most never knew… Big Momma participated in the Independent Wrestling circuit in Union City, Tennessee in her younger years. Of course, she would never brag about it, but oh how her kids and grandkids thought it was so cool. She wrestled as Tammy Jones, using the name of one of her nieces, and an easy to remember last name. This is something to smile about when you’re with us remembering our forever idol and hero.

In addition to her husband and parents, she was preceded in death by two sisters, Vera Lescure and Hazel Wylie; three brothers, Jack Campbell, Bill Campbell and Edward Campbell; and her grandson, Chad Meulenberg.