Planning to celebrate the new year with fireworks? Some may be harder to find

HENDERSON COUNTY, Tenn. — Fireworks can be an essential part of any new year’s celebration. However, this year there are some common ones that may seem harder to find. A small fireworks shortage could affect you when you go fireworks shopping this season. 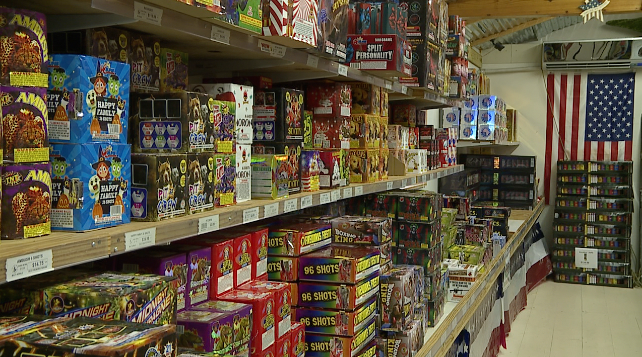 “The main thing that’s difficult for us to get right now is the smaller things like the novelties. Which are like the little trucks and toys that kids can shoot and play with and just all the smaller things, sparklers are a big one and roman candles,” said Erin Buhrmann.

When asked why there was a shortage of fireworks, Buhrmann responded, “I think it’s because, aside from the big ones, they take more time to make because there’s so many small ones in a package and they just take longer to produce.”

The type of fireworks people buy vary with age. Buhrmann went on to explain, “Most people, so far, when they come in want to get one really good item or a box of artillery shells, things that they can shoot quick but still have a really good show with. When it’s just kids, they come in and get smaller things, because, you know, more fuses to light, the more fun it is.”

While enjoying your fireworks you also want to stay safe. Luttrell Billingsley from the Jackson Fire Department says that the most common injuries from consumer fireworks are to an individual’s extremities such as the hands, fingers, or legs. Billingsley also strongly suggested staying away from consumer fireworks and instead going to see a professional show. Lastly, he spoke about the dangers of sparklers, “Wood ignites at 356 degrees and burns at 575 degrees,” Billingsley said. “If you aren’t aware that these sparklers, they burn at a very, very, high temperature of 1200 degrees. So we have an apt to be more injured by using these things than any of the other fireworks at this time.”

You may want to check for any restrictions on setting off fireworks in your city or county. The Jackson Fire Department wants to remind you that fireworks are illegal if you live within Jackson city limits.